The Fraternity – International Humanitarian Federation (FIHF) has been conducting humanitarian missions and attending to emergencies since 2011, with 23 missions altogether, both in Brazil and in 16 other countries in Africa, Latin America, Asia, Europe and the Middle East.

The Fraternity volunteers have acted in social, natural and environmental disasters. They have also assisted refugees and migrants. Today – August 19 – the World Humanitarian Day is celebrated; this date was instituted by the UN in 2009 as a tribute to those who, in service to the most vulnerable and in defense of humanitarian causes, donate their services and risk their own lives.

Through the stories of three missionaries, we honor all who work in humanitarian causes, facing unprecedented challenges and obstacles, especially at this time when the planet is fighting the Covid-19 pandemic.

Assisting those most in need is an impulse that Imer felt from a very young age. Using his background in odontology, in 1995 he became part of the humanitarian missions in Argentina and Peru. He reveals: “I always felt that I had something to do for others, at every moment, in any situation, wherever I went.” He joined the Fraternity – Humanitarian (FFHI) as a missionary in 2013, in the Mission of Ethiopia, and since then he has participated in 13 other missions, besides the permanent ones. Always, according to him, “with the intention of offering an opportunity to those who suffer; to reach the most remote places where people can feel that someone has come for them, to serve, to listen, to share, to smile together.”

Among so many experiences, Imer highlights the missions on the African continent as “those that have marked my soul forever. The combination of misery, poverty and hunger, with the joy, simplicity and gratitude of the African people made me transcend appearances and find the essence of things.” 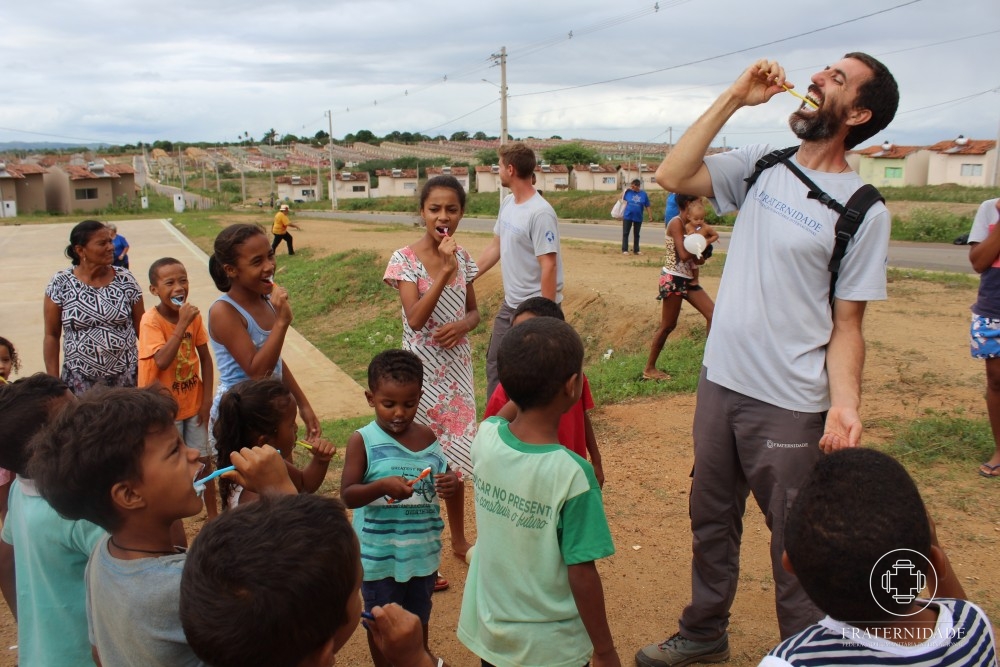 Also very touching, for Imer, is the coexistence with the indigenous people from Venezuela, who are currently assisted in the Roraima Mission. “With them everything is new, there is a mutual acceptance of different customs and cultures, a constant interchange in which everyone learns with love and consciousness through coexistence.”

Another experience that he deems very important is assistancing homeless people in prisons, in nursing homes and in hospitals: “it is an opportunity to alleviate human suffering and to encourage individuals to transcend these situations.” He recalls that a missionary must, “continue humbly learning from every situation, with each person, and always preparing himself in the best possible way to confront the situations that arise, offering help where needed.” Imer believes that “the learning process has a beginning, but no end. Each person we contact is unique and so is their life condition: this enables us to live a constant renewal of our selfless service.”

Since 2016, Rafael had been collaborating  with the Fraternity – Humanitarian (FFHI) in tasks related to missions, and in 2018,  he had the opportunity to participate in the Roraima Mission. In 2019 he also worked in the Missons of Brumadinho, Lebanon and Angola. He is currently back with the Roraima Mission. Deep inside, Rafael feels an impulse to serve and collaborate in any way possible with the planetary situation, as he explains: “serving not only for the common welfare of humanity, but also for the other Kingdoms, as in Brumadinho where I was taking care of animals, and often also taking care of the Plant and Mineral Kingdoms.”

The experience as a missionary and the involvement in such delicate life situations have brought Rafael very significant insights, as he explains: “the resilience of the people assisted often surprises me, as well as the joy of the children of Africa and the indigenous children with whom I live daily.” He adds: “we end up seeing how irrelevant our problems and daily situations are when compared to so many complex realities of difficult survival.”

Another important issue he points out is about communication when you are abroad in a country with another language: “What I felt serving in Lebanon was something quite striking. The volunteer service makes it possible to create a sincere and direct communication, even without speaking the same language – that is the precise moment you get to interact with the language of your heart.”

For Rafael, one of the challenges with regard to acting in humanitarian crises” is to work on building solutions for such complex situations, seeking, through immediate assistance, to create a bridge with the person assisted so  they feel compelled to strive for a reconstruction in their life. The greatest challenge and overcoming has been in the response during this pandemic, as he explains: “We are working intensively and in person, leaving aside the fears so that people may have the minimal conditions to cope with the situations that arise.”

And the service continues with the constant readjustments to this new planetary reality, as Rafael expresses: “Now is the time to resume, within the shelters, some constructive work of education, courses, with many precautions and many adjustments.” Demonstrating maturity in the task, he adds: “the important thing is not to stop, there is no way to simply stop, you have to move forward, even in this scenario.” 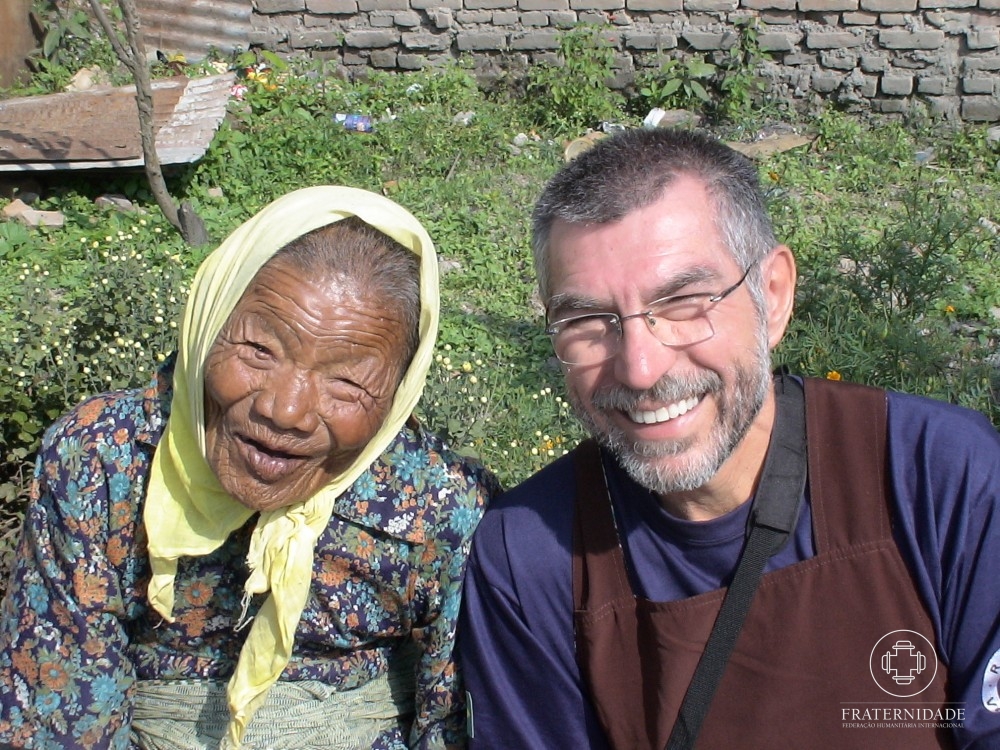 Ricardo: Solidarity with the victims of the earthquake in Nepal

Having worked from time to time in the Light-Community of Figueira since 1992, in 2005 Ricardo felt the urge to dedicate more time to it. And although he was at the peak of his professional career, in 2007 he dissociated himself from it and began to fully commit to the work of the community.

After having coordinated some of the areas and affiliates, Ricardo joined the team of the Fraternity (FIHF) in 2010 and became the Coordinator of the Missions from the very first one held in 2011. Having participated in more than twenty missions as a coordinator preparing the team, the logistics, the trips and the training of the missionaries, Ricardo explains: “Since I was young I went through several apprenticeships: I was a scout, I learned to sail, to climb, and I thought that they were apprenticeships for that moment; however, all of them were useful, because from each one I could bring something to apply in the missions.”

He believes that participating in a mission “is a constant learning process, each mission, each country, each group, always has something that adds to it.” He points out the one that most affected him was in Turkey at the height of the Syrian crisis. “We prepared ourselves to be at the border of Turkey with Syria, we trained in case we were attacked by terrorists, and when we arrived, it was not possible to execute the plan. An institution there put us on the refugee route and we ended up working the whole time with the children.”

He then adds: “The mission from Greece was also very interesting, because it happened in the same context as the crisis in Syria, and afterwards we arrived here in Roraima – where I have been the longest – with that same situation of helping refugees, immigrants .” Ricardo: effort to save animals after dam break in MG

At the beginning of the pandemic, while providing assistance at the Transit Shelter (ATM) in Manaus, Ricardo was contaminated with the coronavirus and survived by following medical recommendations. “The most difficult thing was to be isolated for fourteen days without being able to participate,” he laments.

Currently, as Operational Coordinator of the Roraima Mission shelters, Ricardo explains: “I am living on the front line, with 400, 500 people, taking all the precautions but without any concern, because in every crisis, in every epidemic, we know that there is something bigger behind it.” And he concludes: “as missionaries, we have no expectations or plans for the future, we must be open to do what we are told to do. I want to be where I need to be, doing what needs to be done.”

Being a missionary in humanitarian causes

The dedicated words and initiatives of Rafael, who began more recently, the much-to-be-imitated life experience of Imer, and the absolute dedication of Ricardo, in all of them, it is possible to see examples of missionaries and humanitarian servers. In them, lies the vibration of a basic attribute of the teaching transmitted by José Trigueirinho, founder of the Fraternity (FIHF): “through unconditional service, to vivify the inner nucleus of those who suffer.”

The giving of self of these and so many other abnegated beings, who, by giving unconditional love, manifest the teaching they have received, is exactly what constitutes the Fraternity (FIHF). It allows the help to continue and allows the Humanitarian Missions to keep working.

Art-Education: a tool for restructuring in the humanitarian response