Music for the Healing and Upliftment of Humanity presented “Mirrors” 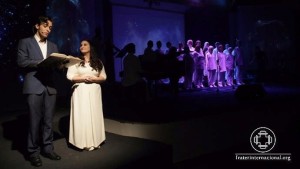 A dynamic scenario through mandalas and spirals projected on the walls was the environment that received the audience in the ninth edition of a new cycle of Music for the Healing and Upliftment of Humanity. The mandalas and spirals had the effect of windows that invited to enter meditation in the remembrance of the form and state of the Cosmos

The event took place last October 23, in the auditorium of the Community-of-Light of Figueira. With the theme “Mirrors” (“Systems of communication, interrelationship, control and radiation of energies of the Cosmos” – Trigueirinho), it had the musical direction of Friar Benedetto, from Grace Mercy Order, and the participation of guest choralists and musicians, besides the always expected presentation of the Choir of the Communties-of-Light affiliated with Fraternidade – International Humanitarian Federation. 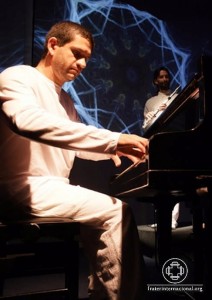 The event was characterized by the feminine energy as an important part of the manifestation of the Creation. Thus was performed a musical repertoire impregnated with this vibration, which included pieces such as Sun-Home, Mirrors of Light, Sublime Mirrors, Mother of the Light, the Sacred Feminine Energy, Peace for Peace. Instruction videos elaborated the same conceptual line, with the following names: The Mirrors, The Creation of the Mirrors, The Mirrors and Humanity.

The Meetings of Music for the Healing and Upliftment of Humanity are increasingly receptive to the participation of guest musicians. Attracted by this including energy, there arrives Marcelo Bomfim, from Aguas de Lindoia, SP, multi-instrument player, musician and educator. Author of Sun-Home, musical composition that opened the show of that day, which he interpreted on the piano accompanied by the transverse flute of Hernán Miranda, also a musician and educator, member of the Community-of-Light of Figueira.

“Sun-Home opens with the presence of the piano, and represents the solar explosión, Christic force that illumines, the origin of everything”, explains Bomfim. An origin, he says, that is implicit in unity. “The cyclic shades of a coming and going of the composition itself, reflect, as a mirror, the feminine and masculine energy present in everything”, he adds. In his first participation in the event, he shows his emotion and shares the following: “To me, participating in an event like this is an honor, a responsibility, and also an opportunity. I became a different person, I left with more force, more light, aligned, I am another being. It has been a wonderful transforming experience”. 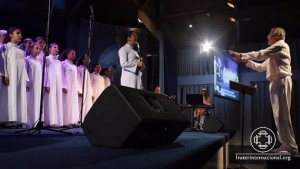 “The Singing Girls of Lavras”, a musical reference in Brazil today, were also present in this edition of Music for the Healing and Upliftment of Humanity. “This work with the girls has existed for ten years, it is the fourth time they come to Figueira. I always remember that before their first presentation here, we prepared for a long time”, comments Jose Maciel, the conductor of this group. “It is not just about opening the mouth and singing, we work the lyrics of the song, we deepen topics such as peace, consciousness, humility, and study about the mental and emotional bodies. They make an effort to learn and give their best, and this can be seen in the devotion with which they sing. Without the fear of being mistaken, this work is conducted, guided”, he continues. “To present here is a joy for them, and the invitation is always received with a lot of gratitude”, concludes Maciel.

A space to welcome many souls 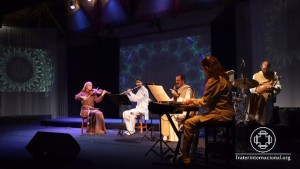 Since three years ago, on the 23rd of each month this event takes place, as the fruit of a request of the Virgin Mary in a message transmitted on November 26, 2015, through the visionary Friar Elías del Sagrado Corazón de Jesús.

Even while the request is relatively recent, its execution and result is a product of a work of many years. This is what Friar Benedetto explains. “The work with songs in the communities, especially in the Community-of-Light of Figueira has been taking place for thirty years and, throughout all stages of this task, several manifestations have occurred, and something that we cannot encompass with our consciousness was built internally. Music for the Healing and Upliftment of Humanity is one of these recent manifestations”. 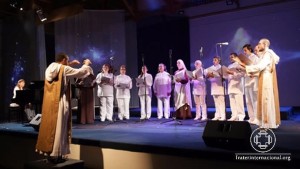 Aware that this event is awaited month by month by many people from several countries, Friar Benedetto comments: “Music is this door that opens to welcome many souls, it is one of the fields in which ecumenism can really be lived. Through music, and in particular through Music for the Healing and Upliftment of Humanity we can create an environment for all souls, regardless of belief, to feel harmonious and participate in this profound spiritual work”.