They exchanged a smiling hug at the Passenger Terminal of Congonhas Airport in São Paulo. Clara, recently arrived from Roraima, had traveled almost 5 thousand kilometers thru dawn. Most of her flight companions were Venezuelan, mass fleeing people from the neighboring country. The missionary and the writer Ana Regina Nogueira soon would embark to Florianopolis where they were awaited by volunteers from the Fraternidade – International Humanitarian Federation. The volunteers would take turns from then on taking them to the launching places of Ana Regina’s most recent book: “Fraternidade – International Humanitarian Missions”.

The publication tells the history of the humanitarian missions realized by Fraternidade and it would be launched in six cities of the Southern Brazil in the following days. In the circuit organized by Rede-Luz Sul, in cooperation with Irdin Publishing, both affiliated with Fraternidade, the first stop: Tubarão. Clara, an important protagonist of the book, and the author would speak to students and professors of Unisul – Universidade do Sul de Santa Catarina, for representatives of autonomous entities and civil society, and for immigrants. 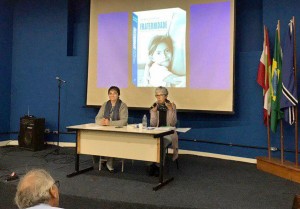 General Coordinator of Roraima Humanitarian Mission, Clara went up the stage. She reported in detail the experience and the challenges faced by Fraternidade, which since 2016 alleviates the suffering of thousands of Venezuelans from the unprecedent migratory crisis in Latin America. She spoke about losses and traumas, and fraternal love that grows in the five refugee shelters managed by Fraternidade, in partnership with UNHCR – United Nations High Commissioner for Refugees, in the capital Boa Vista and in Pacaraima, the city border with Venezuela. The missionary activity values the culture, faith and origin of the attendees, preparing them to integrate into a new life without, nevertheless, losing their identity.

The hearts were being touched by the humanitarian issues and by hope when Ana Regina talked about a crucial theme: “How come an increasing number of people, although leading a stable material life, are feeling a great emptiness? Nothing seems to fulfill them, and they fall into crisis and depression. Souls are thirsty and in need of courage to change. The selfless service is a safe path to free us from pain. When we serve, a light turns on. The missionaries had courage and they effort to bring love, food and harmony into the chaos, fear and hunger.”

Invited on the after by the Escola Superior do Ministério Público da União de Florianópolis (Superior School of the Public Prosecutor’s Office of Florianópolis), Ana Regina presented the book for half an hour in the opening speech of the roundtable “Migration, Racism and Xenophobia in Santa Catarina”, of which Clara had participated, clarifying about the shelters of Roraima. To elucidate how lack of love, rejection, and indifference destroy the human being, the author narrated stories about the consequences of the dominator’s cruel program. They ridicule cultures and putdown the skin color to destroy people’s self-steem and, thus, acquire power.

She cited the outbreak of hatred in Rwanda in 1992, which provoked the genocide of 800,000 people in 100 days. She talked about the discrimination against indigenous people in Brazil, in the Argentinian Chaco, and in Paraguay. Citing Turkey and Colombia, she said that the human heart is ill. She reminded the present ones- aldermen, deputies, public managers, law-makers, organization and association members, university students, professors, and more: “We are one humanity, one family. Each one of us needs to learn to love more, love better.”

During the launch at the Culture Bookstore, in Porto Alegre, was strong the presence of the Rede-Luz volunteers which organized the marathon in the south of the country. And at classic music school- IPDAE, also in the south, young musicians enjoyed the history of the missionary-violinist who was invited by a priest to play at a mass in a female prison in Nicaragua. The priest said Introito, Gloria Kyrie, and he was inventing the melodies in the moment, even without knowing the Catholic ritual. And 150 animated inmates accompanied him singing, with rhythm.  Fádia Gonzalez, from Rede-Luz Porto Alegre, writes: “The lecture sought to awaken the consciousness of young people to the crucial importance of music as an instrument of harmonization of the chaos in which migrants are submerged and society in general.” 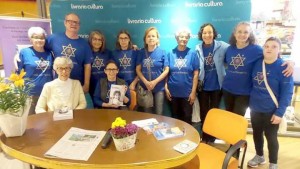 In São Bento do Sul, the volunteer writer, who donates her copyrights, talked about how quickly economic crises lead traders, underpaid, doctors or engineers to lose their standard of living. So, it was with the so-called new poor in Greece and with the Venezuelan university teacher, who today cleans toilets in Brazil. The planet Agonizes and nature responds to aggressions with violence. A four-minute tornado devastated the thriving city of Dolores, Uruguay. Chile’s largest forest fire destroyed the farm, the house and the cat of a wealthy Chilean farmer.

In Joinville, the journey continued intensively. Talks about the book fraternity launched seeds in the same municipal school in which the author released her first work, “Living the love of the Dogs” in 2016. There were 180 students, teachers, education assistants and the Englishteacher writer Marlete Cardoso, who told a Guarani legend about the creation of animals. 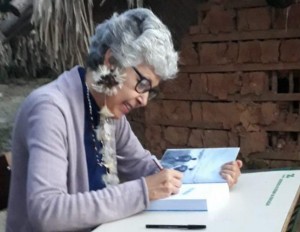 The next afternoon, Tekoá Tarumã village. With simplicity, without competition, living in mutual help, young and silent indigenous children, mothers breastfeeding babies, plus some whites, called Juruás, sat in half a moon around the table in the center of the space. Ana Regina and Pedro Eginio Leites de Alexandre, Professor in the village, scholar and admirer of Guarani indigenous culture, were side by side during the deep and long reflection. They entered Indian time, which is in no hurry. In such a humble place, life reaches the sacred with ease.

The 16th Book Fair of Joinville, the most important of the State, received many people. To disseminate the reading, the book stand of Irdin, with the support of the Rede-Luz Joinville, worked for 10 days the consciousness expansion. Seated in a white armchair on the stage of the event center, Ana Regina bid goodbye at the launch marathon of the book fraternity – International humanitarian missions. 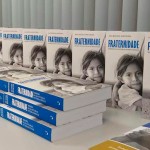 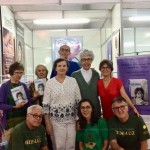 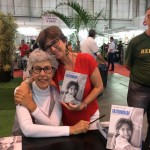 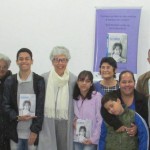 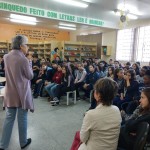