Fraternidade participates in a symposium about migrants in Roraima 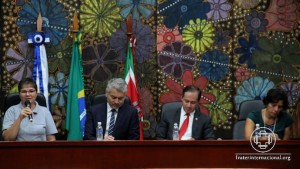 The opening round of the symposium about migrations

Fraternidade – International Humanitarian Federation (FIHF), was present in the symposium “Refugees and Migrants in Roraima: How to welcome and integrate?”, which was held by the Superior School of the Federal Public Ministry (ESMPU).

The event is part of the project “Working in a network: training of the actors involved in the welcoming, integration, and internalization of refugees and migrants in Brazil”, and was held on November 22, in the auditorium of the Advogado Sobral Pinto Forum, in Boa Vista, Roraima.

An assistant of FIHF playing with a kid of the shelter

In the opening round, Clara, a missionary of FIHF, and operative coordinator of the shelters managed by the institution in Roraima, remembered that, when Fraternidade arrived in Roraima, it already found people working and helping the Venezuelans. “We joined this cause and sometimes we had to be protagonists of this story while we waited for some solution, some governmental response. We stayed firm in this help and realized, throughout these two years, in this migratory process a relative maturing of the humanitarian assistance. Gradually, other help came, such as from international organizations, such as the UNHCR, of which we are partners that implement shelters, and other United Nations agencies”, said the missionary.

She highlighted that “the current challenge is how to truly integrate these brothers and sisters. An example of this is when we daily face people in the shelters with a high professional level that accept to do works that fall much shorter than what they are capable of doing. How to solve this issue?” 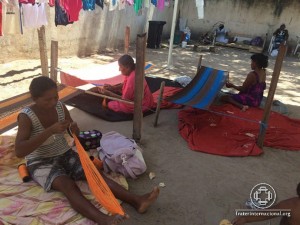 The FIHF promotes the rescue of the indigenous culture

During the symposium, four lectures were conducted: “Context of the National Migratory and Refuge Policy”, National Plan of Internalization: balance, challenges and perspectives”, “Venezuelan Indigenous migration” and “Local experiences in the attention to migrants and refugees”.

Clara presented a summary of the evolution of the assistance of Fraternidade in the Indigenous shelters of Pintolandia, in Boa Vista, and of Janokoida, in Pacaraima, both located in Roraima. “It is important and urgent to consider this issue of the Indigenous immigration and how each organization, each one of those present here, can contribute with a small solution, so that, by uniting them all, something that can minimally organize the life of these brothers and sisters can emerge”, highlighted the missionary.

In complementation to the symposium, on November 23 and 24, there occurred ten workshops about migratory topics destined to a specific public involved with the migratory theme. The workshops were held in the campus of Laws of the Roraima Federal University. The idea was to train, discuss and develop abilities related to the attention to migrants and refugees. 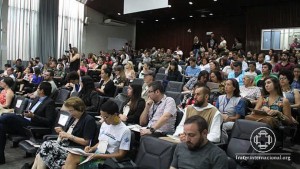 A numerous public attended the talks

The symposium was the fourth one organized by the Network of Training, an instance created in June 2018, which focus on migration and refuge. The network is formed by public institutions, United Nations agencies, and representatives of civil society, whose objective is to concretize what is established on the Brazilian Federal Constitution concerning the rights of refugees that come to Brazil.

Similar events had been held in the cities of Belem, PA, Manaus, AM, and Sao Paulo, SP, where about 1,100 people were trained. In Roraima, the number of trained people were about 500 people. For next year these activities are predicted for other ten Brazilian states, when the expected goal will be to train about 5,000 people in the whole country. The idea is to foment the discussion around the establishment of a local policy of integration for refugees and migrants, according to what explained João Akira Omoto, director general of ESMPU.