It is well known that going through an event of forced displacement is a traumatic experience, to say the least. When this displacement involves immigration to a foreign country with another culture and another language, the intensity of the effect of the experience increases in proportion. When we add the factor of a migration of indigenous peoples to a foreign country, we begin to put together an even more complex scenario.

So complex, that in Roraima, for the first time in history, there is a challenging humanitarian response involving the housing of indigenous groups of different ethnicities in shelters supported through interagency cooperation. It was up to the Fraternity – International Humanitarian Federation (FIHF) to take on the responsibility for this challenge and to manage the two existing indigenous shelters, Janokoida in Pacaraima and Pintolândia in Boa Vista, in partnership with the United Nations High Commissioner for Refugees (UNHCR) and under the protocols of Operation Welcome, a governmental task force that organizes the activities of more than 100 humanitarian players.

With the scenario presented already seeming to be quite complex and challenging, one more aspect makes some segments of these groups an even more vulnerable minority: adolescence. The age in which an entire universe moves within each being, bringing to light a series of conflicts, where they go through physical, emotional, and mental development, and where adaptation to adult life and society is sought, makes it even more difficult to go through the experience of being a Venezuelan native living in a shelter for refugees in Brazil.

Meeting the demand to provide life-affirming nourishment for these hearts, weakened by so many extreme situations occurring at the same time, has always been one of the proposals for the Humanitarian Art Education Sector in Emergencies  of the Fraternity (FIHF), which has been developing a variety of activities with minors of different age groups in the shelters where it is active, such as music, painting, theater, sports, recreation, always with the focus of awakening resilience and rescuing the dignity.

In the specific case of the adolescents, there was recently an innovative experience in the Pintolândia Shelter, which have quite positive results from different perspectives: an art and photography course of a month’s duration, administered by Celita Schneider, professional photographer and volunteer collaborator of the Fraternity (FIHF), and Friar Ezequiel, missionary active in the Communication Sector of the institution and monk of the Grace Mercy Order. The course culminated with the exhibition “The Art of Photography”, composed of photos of the nine participants of the course – or we could say, of nine young artists, such was the quality of the final result presented to the community.

Speaking about the reason for doing the course and about the public involved, Friar Ezequiel tells us that, “they are extremely vulnerable, because they have a tendency to be on the cell phone all the time, those who have them, or become involved with alcohol, with drugs…, they are at that point where they see no future, we could say.” He says that during the classes, the young people demonstrated a great interest, because they are very drawn to photography, the audiovisual arts, and that, “they have a natural artistic way of looking at things.” 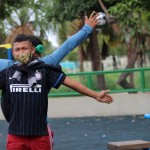 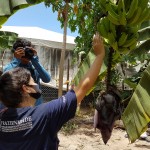 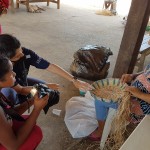 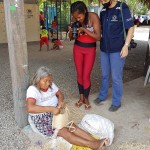 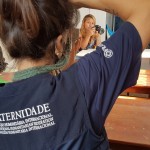 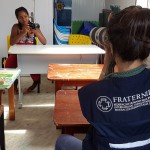 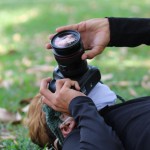 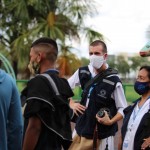 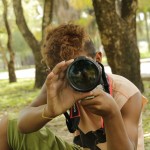 In relation to the impact of the course in the daily routine of the shelter and the transformation that can happen in interpersonal relationships, Marcos Neves, collaborator of the Fraternity (FIHF), in the role of community participation officer at the shelter, expresses that, “without a doubt, this project brought an improvement in the family relationships, because many of these participants had a certain tension in their family nucleus, and with this perspective, showing their point of view, these social relations gradually have been relieved of their stress.”

For many of the participants, this course was far beyond mere knowledge of photography techniques. It was the pioneering of new breaks in the field of emotions, it was a mark of overcoming the limitations imposed by the condition in which they live, it was the dawn of a feeling of hope for a better future. Glennysmar, one of the participants in the course, confiding her nervousness during the exhibition, set up with the photos in size 60×90 cm in addition to a short biography of each artist, says: “I never thought I would do this type of exhibition, because in fact, unfortunately, I thought I couldn’t, but thanks to this course, yes, I was able to.”

About this overcoming, Celita, who has worked with photography for the last 12 years, and has already done volunteer work in Africa before collaborating with the Fraternity (FIHF) in Roraima, states the following: “to give back the dream, the hope of dreaming, for someone, we are an instrument for this to really happen.” For her, who knows the transforming potential of art, this was the first experience of administering a photography course: “to believe in a fellow being, for sure is the most gratifying part; knowing that when you really believe in a fellow being, they believe in themselves also.”

Concerning the works presented in the exhibition, organized with a lot of love and great care in each detail by the administrators and participants of the course, it can be said that they held a depth that touched many who attended the event. Addressing subjects such as the routine of the shelter, through traditional foods and handicrafts; or mixing indigenous and non-indigenous cultural elements, such as the photo of a plane in full flight entitled “Iron Bird”; or even showing a “Look of Hope” captured in a child a few months old; or also in the abstract created with elements of nature, each photograph revealed the uniqueness of an inner world rich in creativity and sensitivity.

For the community of the Pintolândia Shelter, so accustomed to the cameras and the “clicks” of the different agencies that work in the shelter and that make public the reality of what is happening in this immigration crisis, there was a paradigm shift in relation to photography. Up till then, the groups that live in the shelter were always the focus of the lenses moving through there, which sometimes even generated questions about where so many records were going. With the course, however, seeing themselves all reflected in the nine young pathfinders, that like the point of a spear, opened the way for new perspectives, the collective bias about the Art of Photographing was transformed, because for the first time they felt, as a group, the magic of being behind the cameras and making the beauty of a moment eternal.

Testimony of Ana Paula Nóbrega da Fonte, who at the time of the course, was a member of the Fraternity as coordinator of the shelter.

The workshop “The Art of Photography” represented a milestone in the lives of the young people of the Pintolândia Shelter. 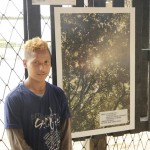 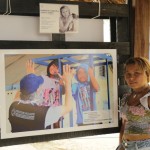 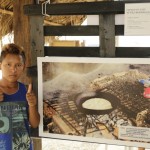 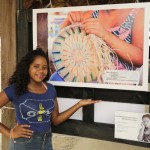 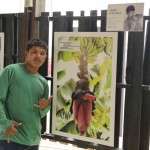 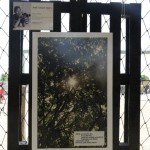 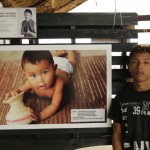 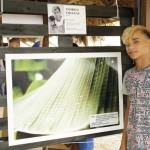 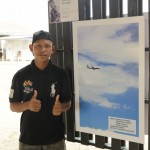 Over the four months I was in charge of shelter management, I heard boys and girls complaining several times about the lack of future prospects and opportunities, for some an experience that has lasted almost four years, from the time they arrived in Brazil and entered the shelter with their families. Often these boys and girls came to me and other staff members to talk for a few minutes, during which they bombarded us with questions, their curious eyes, wanting to understand what all is involved with our work.

One day, one of those children said to me that all he wanted was to be able to have the opportunity to study, to learn a profession, so as to one day, who knows, be like me, at a table in a room with air conditioning…

There I understood how much, in the restricted universe of the shelter, they observe us and see us as an example, and how they see the few opportunities for study and learning as the only possible bridges to a more dignified and less depressing future. He also said that the young people were the only age group of the shelter for which nobody had ever thought of anything for them to do. That there were activities with the children and adolescents up to a specific age group, but when going beyond it, they were forgotten by all the institutions. I went home feeling very sad, digesting those words. On the following day, during the weekly coordination meeting, the issue of the excessive presence of adolescents and young people in the coordination and protection containers during the working hours was highlighted. It was an opportunity for presenting the situation experienced by them, which had gained a voice in the words of the brave young boy, who broke the silence about something extremely uncomfortable for him and his peers, and that in that moment had providentially come up in a coordination meeting. We were informed about the interest and possibility for the communication team to do some courses in the audiovisual area, in which the youth of the shelter demonstrates an almost unanimous interest, through the dialogue with digital media and all its resources, a great attraction for this public.

With the Universe conspiring in favor of good ideas, after some weeks, there was Friar Ezequiel and Celita, meeting with a small but representative, group of young people of the Pintolândia Shelter (selected by their leaders as those with the most potential and need for developing some artistic activity), twice a week, for theory classes and practical basic photography exercises, the beautiful result of which was exhibited in an event done on October 9, in reference to Children’s Day and Indigenous Resistance Day in Venezuela (both celebrated on October 12).

The stories of the parents, teachers and the community in general about the change in behavior of these young boys and girls after the course were impressive, and gives us the assurance that this work needs to be continued, because of bringing the young natives a new perspective in looking at the world around them, but also about the future that awaits them. 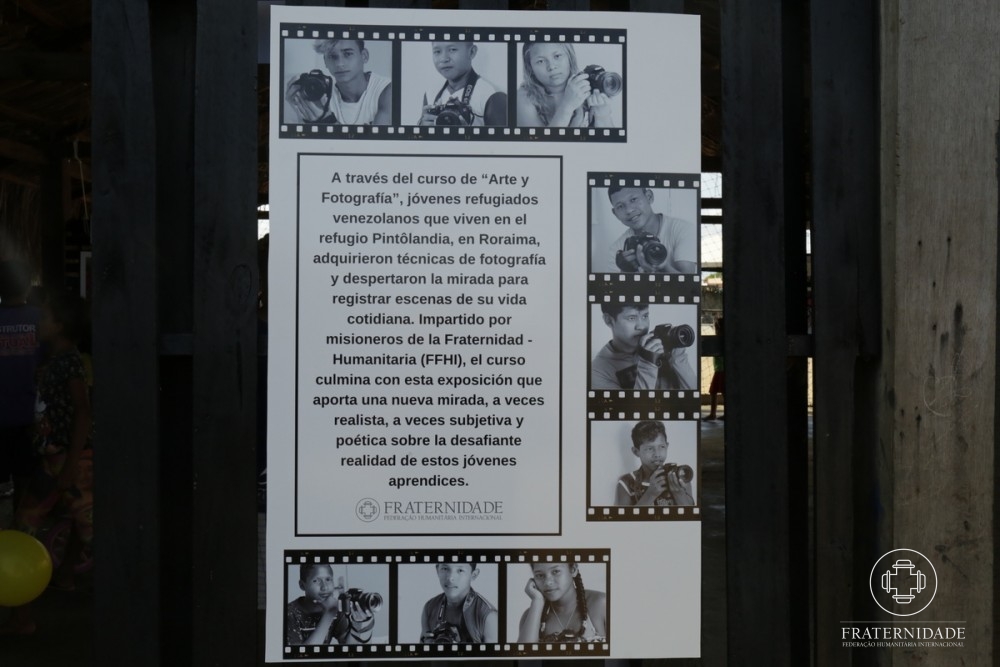