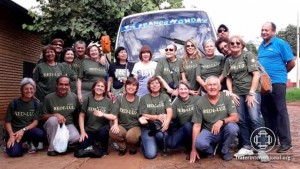 In an atmosphere of a lot of joy, harmony and organization, the 8th Meeting of Service to the Indigenous Consciousness was carried out by Paraguay Mission.

The Network-of-Light of Paraguay prepared the event, in which 25 people participated, including local collaborators and others that come from Argentina and Brazil, as well as Paraguayan volunteers of the health sector.

The activities took place on Saturday, November 3, 2018, in the Mbya Guarani Community of Yvu Porã Renda, located in a neighborhood of Ciudad del Este, in the Eastern area of Paraguay, in its border with Brazil and Argentina. The village congregates about 20 families displaced by the deforestation of the zone of Caaguazú, at the center of the country.

The day was particularly sunny, although the weather forecast was unfavorable. On Sunday, the intense rains and the mud forced the group to cancel the second day of co-existence with the original communities.

The Mbya Guarani hosts received the humanitarian missionaries with traditional Indigenous music, transmitted through a loud-speaker, which accompanied the whole meeting. 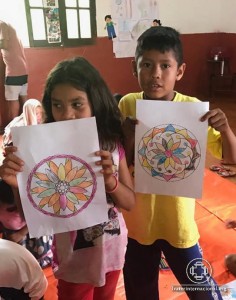 Children’s joy reflected in the painting of mandalas

The visitors offered various services, such as medical, nursery and dental assistance, haircut, lice-removal and head-washing, distribution of food, clothes, footwear and toothbrushes.

They also shared special tasks with the kids, including drawing, mandala painting, and the making of wrist-bands and necklaces.

The Indigenous people turned out to be more trusting tan in previous meetings, and came in greater numbers to the health consultations. Most medical attention was due to skin problems.

In the dental sector, there were 35 patients, on whom several treatments were applied, such as fillings, prophylaxis, fluorine application, extractions and tartar cleaning. Also toothbrushes and dental pastes were distributed, and oral hygiene instructions were imparted. The dentists said they observed improvements in the conditions of several kids whom they had assisted before.

Both for the medical-dental consultations and for the distribution of food, the Chief made use of a micro-phone, connected to the louds-speaker, to called in an orderly way those who would be benefitted. 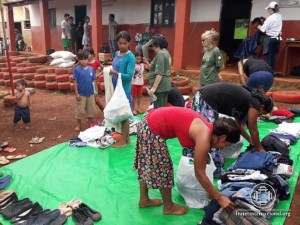 Indigenous people select clothes with a lot of harmony

As the closing of the day, the same Chief commanded a traditional dance, followed by children, youths and elders, who were holding typical musical instruments, and were joined by all those present. According to what they explained, it was a dance used only in special healing sessions, which they were offering to the group, as a sign of gratitude.

Last of all, the Indigenous Chief valued the effor of the volunteers to reach the place and especially thanked the support that Paraguay Mission gave, throughout its editions, to reach the rebuilding of the Opy (House of Prayer and Healing), a sacred space that is serving, so they understand, to attract the materialization of the improvements they are having, such as the installation of a water container and other works.

“I felt unión and group harmony in this mission, both in the Indigenous community and in the integration of the group with representatives of three nations that have a history of disagreements, which symbolizes the maturity that is gradually  attained and the manifestation of the Project of God in this humanity, restoring wounds and transforming them into love for all Kingdoms”, summed up, at the end of the meeting, Teresita Niveyro, who arrived from Posadas, Argentina. 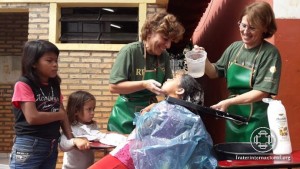 Laercio Borgato Morales, from Campo Grande, state of Mato Grosso do Sul, Brasil, considered that it was a loving work on the part of everyone, a positive experience that will remain engraved in my being”.

“They opened their world to us!, exclaimed Isabel Anderson, from the Argentinian province of Chaco. “This dance in which we participated in which one of the elders explained to us the meaning of the movements, imitating a viper and when we did the turn and he squatted, simulating he was biting us, grabbing our ankle so that we may learn to be always alert, was something unique”, she continued.

Ederlene Colpo,  from Foz de Iguazu, state of Parana, Brazil, commented her experience in the haircut and head-wash of the native people: “We perceived that they have deep lack of caress, of loving contact, and so, as we massaged their head, or as we accommodated the hair from one side to the other, we had the opportunity of transmitting them a little love and they perceived it and were very much at ease”.

Paraguay Mission is part of the Mission for the Original Peoples, a campaign of Fraternidade – International Humanitarian Federation.