The Brazilian Red Cross conducted the training on First-Aids and Transportation to the Victim last Saturday, September 3, in the Nucleus-of-Light of Figueira in São Paulo – the Sacred House of Mary Mother of São Paulo, located in the city of Carapicuíba, metropolitan region of São Paulo, Brazil. 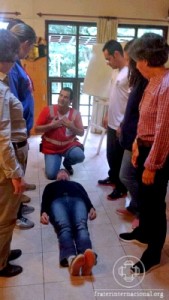 The training, which lasted for eight hours, was administered by a couple of life-guards of the Red Cross, and was directed to the collaborators of the Nucleus-of-Light. The Course was split in two parts, with the exhibition of the theory in the morning and the practice in the afternoon.

In the morning, themes such as all kinds of poisoning, bandages, cases of bruising and hemorrhages, choking, respiratory cardiac massage were touched upon.

In the afternoon, the teachers had the participation of the collaborators to conduct the practical activities of what was taught in the theoretical part. The practice of the cardiac massage was done with the help of puppets and the whole procedure needed for the immobilization and transportation of the victim was carried out by the collaborators of the Nucleus-of-Light.

Roberto Soares, a collaborator of the Emergency Sector of the Fraternidade – International Humanitarian Federation, in São Paulo, organized the training with the Red Cross. The content was adapted to the needs of the group at the moment. “The participants became very satisfied and were very interested in the continuity of the work so that they do not forget what was learnt and they deepen their knowledge on the theme”, said Roberto. 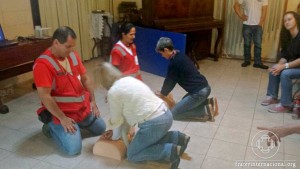 Since last June, the Nucleus-of-Light has been conducting activities related to the project of preparation for emergency situations.

“We hope to be able to continue with other trainings in this sector, which will have the objective of keeping the group prepared and specially united”, completed Roberto. 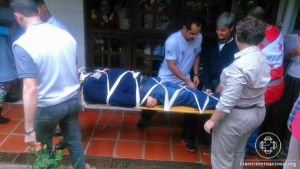