The group of the Network-of-Light of Guarujá, with participation of the groups of Santos and São Vicente, promoted a March for Peace in the morning of November 21 in the city of Guarujá, Southern shore of the state of São Paulo, Brazil. About one hundred people were present, including members of the Network-of-Light of São Paulo, Santo André and São Bernardo do Campo. 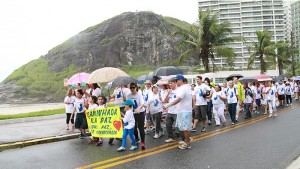 The event is a part of the Campaign for Peace, promoted by Association Mary from the message of the Virgin Mary of May 21, 2015 to the visionaries of the Grace Mercy Order. Both entities belong to the Fraternity – International Humanitarian Federation. In the message, Mary asks special help from all for the accomplishment of her plans of peace for the world.the help may come in the form of prayer or in the form of monetary donation for the group of visionary monks and team to be able to arrive in the countries where Mary needs to be and leave her message.

The Network-of-Light groups, also pertaining to the Fraternity – International Humanitarian Federation, are comprised by people who perform tasks of prayer and activities of altruistic help in many parts of the world and follow the instructions of the Divine Messengers. 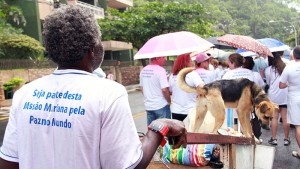 The trajectory of the march had the extension of about 3 kilometers along the beach. Dressed in the t-shirts of the Campaign for Peace, the group distributed pamphlets and sang devotional chants. During the event, the beach avenue was closed and the Traffic Department officers accompanied the route of the participants.

Many people joined the march during the route. This was the case of Mr. José Carlos, a street dweller who accompanied the march with his female dog Lila and his cart of recyclable cans. “Certainly our Divine Mother has helped us to radiate Her Rays of Love and Peace where we passed”, he affirmed.

To Joviana Lopes, a member of the Network-of-Light of São Paulo, the participants perked up so much in supporting this task requested by the Virgin Mary, that they are already thinking of organizing other marchs, one of them in the city of São Paulo. “It was very beautiful, everybody united in a single purpose: PEACE. Something very rare of seeing nowadays”, commented Patrícia, resident of São Vicente. 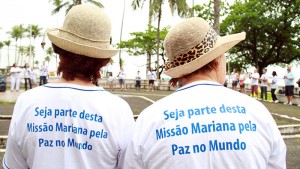