Missionaries will help victims of the hurricane in Uruguay 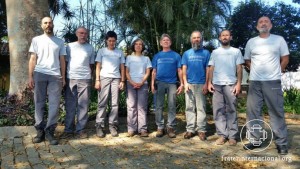 On the first day after the end of the First Meeting of the Planetary Mission Network, eight missionaries of Peace of the Fraternidade – International Humanitarian Federation have left the Community-of-Light of Figueira towards Uruguay, where they will support the tasks of humanitarian assistance to the inhabitants of the city of Dolores, affected by a violent tornado last month.

On April 15, 2016, a third of this village of 20 thousand inhabitants, located in the department (state) of Soriano, Southwest of Uruguay, was devastated by a violent hurricane with winds of up to 250 km per hour. The climatic phenomenon resulted in 5 dead, 250 wounded, about 10 thousand affected, 4 thousand evacuees and material losses estimated in 25 million dollars, according to the Uruguayan press. 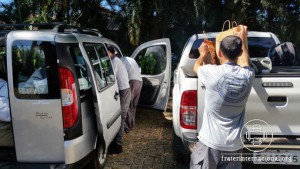 The missionaries of Peace prepare their equipment.

Of the eight missionaries of Peace who travelled to Uruguay, two will go to the Community-of-Light of Fraternity, in Paysandú, where they will render service of support to the residents and collaborators of this place, which offers opportunities of fraternal co-existence in harmony, fraternity and goodwill to all the kingdoms. Meanwhile, six missionaries of Peace will continue the journey to the city of Dolores, where they will camp in the City Gymnasium. They are expected to arrive in their destiny on May 5, and to remain in Uruguay during the whole month.