Coming from the French word solidarité, it means to identify oneself with the suffering of another, also invoking a reciprocal responsibility. As an essential value, it transcends borders, cultures and beliefs, and can unite people and nations in support of the common good.

For the purpose of highlighting the importance of collective actions to overcome global problems and reach worldwide development objectives, in 2005, the United Nations (UN) established December 20 as International Human Solidarity Day. Building a better and safer world for all.

On this day, through governments and the most diverse segments of society, various initiatives and commitments are set in motion concerning the need for human solidarity in contributing to ending poverty. Among the initiatives organized by the UN, the 2030 Agenda for Sustainable Development stands out, having 17 objectives divided into goals.

In the teachings of fraternity,  solidarity unity and unconditional love for all expressions of life, transmitted by one of its founders, the spiritual philosopher, José Trigueirinho Netto, are found the basic foundations of the practice carried out by the humanitarian servers of the Humanitarian Fraternity(FIHF) in its actions through different missions around the world.

In this sense, we share the story of the humanitarian servers and consecrated missionary, Luzío, in his journey of selfless service, the giving of self and love shared with the neediest. 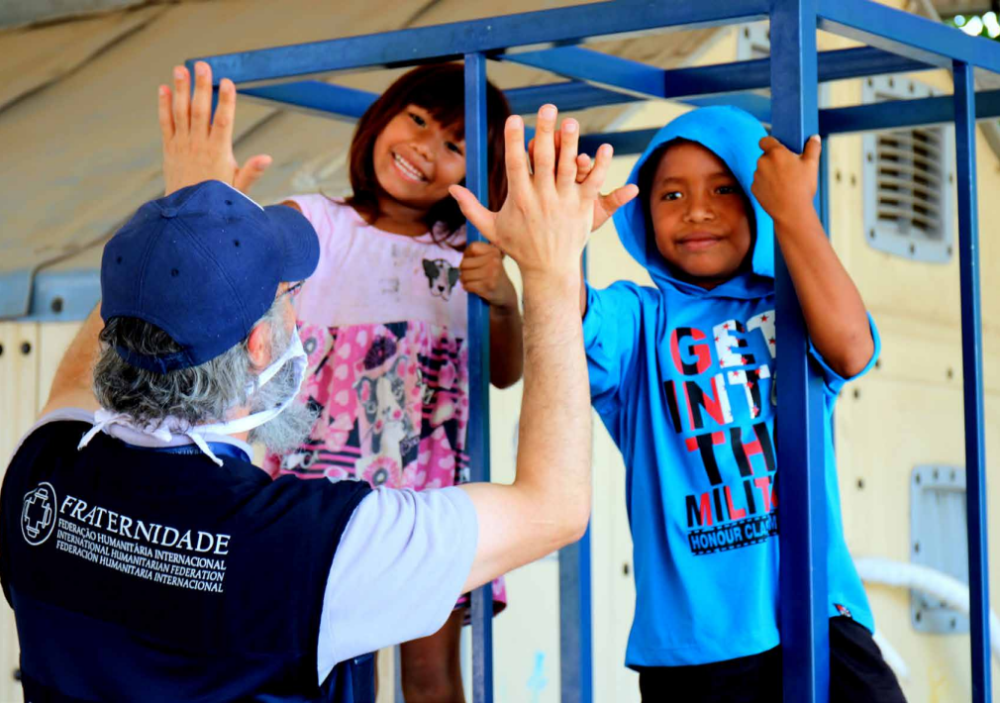 From volunteering to service, from service to consecration

My story about volunteering begins nearly 20 years ago, when I was in the university. I lived in Curitiba, and was experiencing a little existential crisis, when a person with whom I shared what I was feeling asked if I had ever thought about doing volunteer work. That question had quite an effect at the time; I was very intrigued because I was twenty-something years old, had altruistic inclinations, aspired to a better world, but my answer was no, I had never seriously considered being a volunteer.

At the time, I had already read The Celestine Prophecy, and I learned to pay attention to the signs that appeared along my way. So when in that same week I started talking with a young girl I didn’t know, in the restaurant of the university, and she told me she was part of a group that was doing volunteer work in a poor neighborhood of the city, my antenna began to emit a little red light, and I wanted to know more about it. She invited me to get to know the work of OVO (Oganización Vida y Oportunidad [Life & Opportunity Organization]), and me not at all unassuming, accepted immediately.

It was love at first sight (I don’t know if that expression fits here, but it perfectly translates the feeling)! I fell in love when I went for the first time to get to know the work of informal education which the OVO did with children and adolescents in Vila Pantanal, a squatter’s area in the region of the headwaters of the Iguazú river. OVO was an organization born through the Jewish youth movement, and expanded into the universities of the capital. It combined techniques and games brought from Dror, the pedagogy of Paulo Freire, and the Education in Human Values of Sai Baba, besides having people from different spheres and with different life stories. At a minimum, we were ecumenical and eclectic, besides being young and creative.

There were not many of us, but we did beautiful work. I had a full-time job in a company, I spent hours during the day travelling by bus, studied at night, did spiritual practices on Saturdays, and spent entire  Sundays afternoons in Vila Pantanal. Everybody had a super-busy life, but we still found time to prepare the activities at lunch-time during the week. After working on Sundays, we would meet to evaluate the activity, and somebody or other would always say: “Today I was tired, thought I wouldn’t come, but now I’m so full of energy that I feel I received more than what I gave.” This was always the main feeling, which we already knew about from Saint Francis of Assis’s legacy, but which we experienced in practice: “It is in giving that you receive!” Up to this day, I am grateful for having learned from those young masters of compassion who marked my life.

So this experience of some years with the OVO opened the door to what became a way of life. The next step was to stop working for money, a very complex decision in the full bloom of life, but inspired by the Gospel of the Master, which speaks about the lilies of the field and the birds in the sky, and of first seeking the Kingdom of God, and all else shall be added unto you. Decision made, my feet on the path, and a new paradigm of volunteering appeared before me: service to the Evolutionary Plan. When I got to know the Figueira Light-Community and José Trigueirinho Netto, I realized that the path I had chosen had no going back, and rather than a walk, it was an ascension.

Years were necessary for climbing the mountain to reach the next level, the consecration to the Plan of God. As a consecrated missionary of the Humanitarian Fraternity(FIHF), I live  altruistic service as the only thing necessary. I no longer think in terms of volunteering, since volunteering is when you dedicate yourself for a little or a large part of your time to a cause that is not central to your life. When that cause becomes the center of your life, we enter into service. When that cause is mixed in with our own life and life itself becomes a service, when there is no inner or outer, nor any other reason to get out of bed in the morning, then you have entered the path of consecration. And I think this is the destiny of whomever enters the door of volunteering.