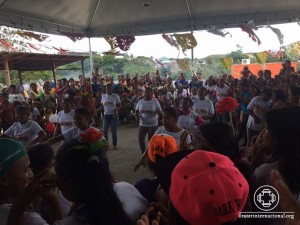 On Sunday, May 13, was celebrated the Mother’s Day in the shelter House of Passing, in Pacaraima, Roraima. At 5 a.m., the Warao Indigenous women sang in homage to the Divine Mother. After the singing, those who live in the shelter prayed the Glorious Mysteries of the Holy Rosary. The women were wearing dresses that they themselves made for that date. Gifts and flowers were offered to the mothers. The celebration had dance presentations, fraternization and a lot of joy among all those present.

On May 3, the Missionaries of Fraternidade – International Humanitarian Federation (FFHI), arrived at the House of Passing and met a pregnant woman in labor. The ambulance was called. The doctors measured her blood pressure, cardiac beatings and temperature. After these procedures, she was taken to hospital, accompanied by her mother. 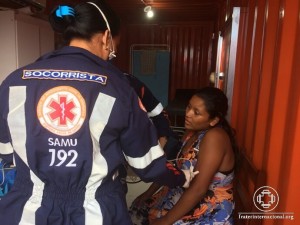 On May 4, soldiers of the Brazilian Army assembled a table of ping pong under the tent, so that the residents could have fun in their free hours.

On May 5, soldiers of the Brazilian Army and Missionaries of Fraternidade assembled a net of volleyball in the shelter. A worker of the Roraima Labor and Social Welfare Secretariat (Setrabes) donated the ball.

On May 8, the Brazilian Army sent five containers to the House of Passing. Two for toilets (masculine and feminine); one for lodging of the soldiers on shift; one for health attendance and one for eventual needs. 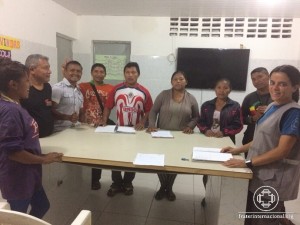 On May 10, there took place a meeting with the teachers of the school of House of Passing, scheduled by initiative of members of Fraternidade. The meeting of the whole educational team, including the supporters from Setrabes, had in mind the fact that some teachers were not imparting classes or seemed to be lost as to the dynamic of the school.

In these days, due to the intensification of the rains in Pacaraima, there occurred flu and fever outbreak among those who live in the House of Passing. About 50 to 80 people were being attended every day. Some sick people were referred to the city hospital. The women have more respiratory problems, because they spend longer time amidst smoke, cooking.