Humanitarian Roraima Mission – Fraternidade has begun support to another shelter 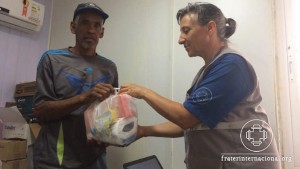 On March 5, Fraternidade – International Humanitarian Federation (FFHI) officially began the activities of support to the management of the shelter Tancredo Neves, in partnership with the UNHCR (United Nations High Commissioner for Refugees) and with the Civil Defense of Roraima. It is a refuge destined to the non-Indigenous Venezuelan immigrant population. This place has existed since October 2017, then administered only by the Civil Defense of the state, responsible for taking there the people who were in the streets of Boa Vista in that occasion. This place currently shelters about 750 people, mainly bachelors. 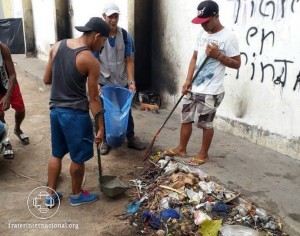 The support began with the distribution of kits containing basic food items and hygiene material. This action derived from the project developed in partnership with the Pan American Development Foundation (PADF), with funds given by the Canadian Embassy. 300 kits were distributed to families and 260 individual kits to bachelors and single women. The activity extended throughout two weeks, as the distribution occurred in parallel with the register of the people.

The missionaries of FFHI also organized the teams of immigrants for the fulfilment of the basic activities needed in the shelters, such as cleaning of external areas and of toilets and fixing of food.

The activity in the kitchen is the one that always demands more effort from the missionary team, as it demands permanent accompaniment for the correct use and distribution of food, as well as so that conflicts of any nature may be avoided.

Support from the Army 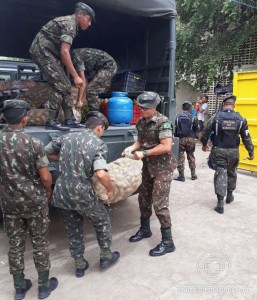 On the 7th, the Army conducted the first delivery of raw food, to be prepared in the shelter and served in three daily meals. At first, this delivery was to take place three times a week. However, on the second week, they began to distribute the packed lunch ready, which facilitated very much the activities of the kitchen team.

The shelter of Pintolandia also benefitted from the distribution of foods that the Brazilian Army began to do this month. Thus, from the 15th, the Indigenous people also began to receive ready packed lunches both at lunch time and at dinner time. As they are not sufficient, extra donation of food have been directed by the team of FFHI for this shelter. The Army makes the delivery of the food and the missionaries take care of the organization of the queue.

On the 25th, the Estacio de Sá University went to the shelter bringing many donations of hygiene and cleaning material. Thus, on the 26th and the 27th, there was distribution of kits prepared with this material to all families in the shelter. 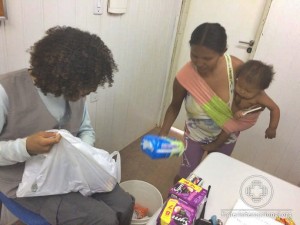 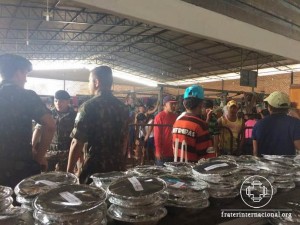 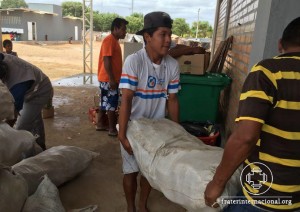 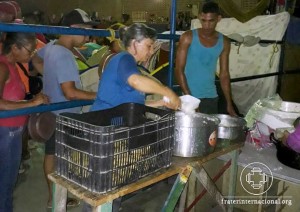