November 6 to 12, Monday to Sunday 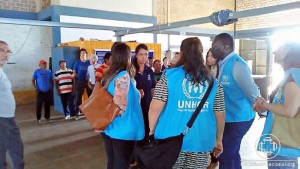 UNHCR representatives in the shelter

Representatives of Brasilia and from abroad of the United Nations High Commissioner for Refugees (UNHCR) visited the CRI – Center of Reference for the Immigrant. They were accompanied by a member of the Institute of Migrations and of Human Rights (IMDH) and of the Labor and Social Welfare Roraima Secretary (Setrabes). The visitors were welcomed by a typical Warao dance and an exhibit of artisanship pieces.

Four interns of the Course of Management in Collective Indigenous Health of the Insikiram Institute of Indigenous Higher Studies of the Roraima Federal University (UFRR) spent the week in the shelter conducting work for the conclusion of the course.

On November 6, one intern participated in health attendance, gave support at the school and made asepsis in the heads of several children who had lice. 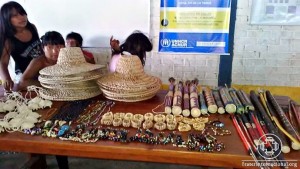 Classes at the school of the shelter with the projection of educational videos.

Nail trimming and recreational activities for the children.

At night, an Indigenous woman with womb cancer was succored and taken to the General Hospital of Boa Vista with severe pain and bleeding. The immigrant was taken to hospital by a couple of the Evangelical Church.

Arrival of a couple of Warao Indigenous immigrants coming from Venezuela. 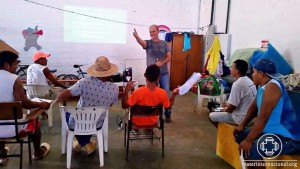 Visit of a representative of the Balcão Turístico (Tourist Balcony) of Roraima, where the exhibit of Warao artisanship is made, accompanied by two researchers of a University Course connected to the  International Organisation for Migration (IOM). The group talked with some artisan women.

Missionaries made visits to some tents to check the needs of immigrants. “Some people only enter the court, where we have greater access, when they eat. Others do not even enter, because of age or physical problem”, explained Alexandrina, a missionary of the Fraternidade – International Humanitarian Federation.

A volunteers made the exhibition of a video showing how to make trash selection.

“The film interest the children a lot and came at the right moment, one day after we introduced the trash selection tins”, said Alexandrina.

Members of the Assemblies of God went to the shelter to learn about the situation of the place and to visit the Indigenous person who has cancer. They had met the immigrant at hospital. 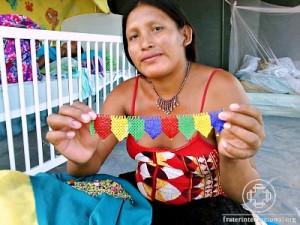 The Methodist Church took children and adolescents from 10 to 16 years old, accompanied by their parents or responsible persons to participate in educational activities in the Church.

In the shelter, immigrants did several activities, such as sewing and artisanship (jewelry, instruments, spears and hammocks).

A teacher and students of the Master’s Course on Health, Education and Environment were in the shelter to learn about its needs and how they could collaborate with the Fraternidade.

A member of the Health Ministry of Brasilia, who works with the health of children and pregnant women, accompanied by worker of the Roraima State Secretary of Health (Sesau/RR) went to the shelter. They learned about the needs of its population in order to establish health initiatives.

An Indigenous immigrant who had been selling artisanship in a traffic light in Boa Vista had his material taken away by the Urban and Housing Development Company (EMHUR), with the help of the City Civil Guard. 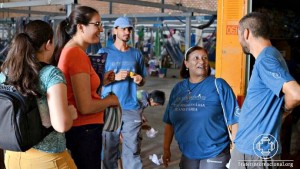 Help from interns of health sector and other areas

Hair washing of children, administration of medicine to remove lice.

A child was referred to hospital due to difficulty breathing.

Three Panare Indigenous people became drunk and were moved away from the shelter. 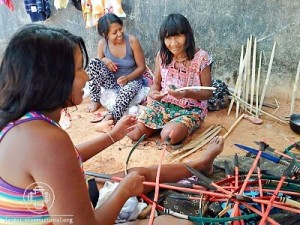 Members of the Universal Pastoral and of the Center of Migrations and of Human Rights (CMDH) took 50 children ages 5 to 12 and their responsible persons for recreational activities outside the shelter.

Visits to the tents of the shelter, with talks, chants and games. The health cases were referred for attendance with doctor in the CRI.

Families with babies recently born in Brazil asked for information about how to register them.

Cleaning of container used for storage of food. 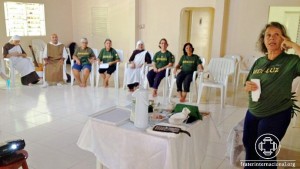 Cleaning of school and gathering of children for classes.

“We perceive that the children remain very distracted, being very difficult to keep them focused on one task. We have to have a lot of love and attention to that, as one day, if they need to attend another school they will have difficulties”, said Alexandrina.

Accompaniment of mother with a one-month baby to the Children’s Hospital. The baby had cough and a flu. At hospital, anemia was detected and medicines were prescribed.

Right after the ending of distribution of dinner, an Indigenous man, drunk, got suffocated with food and without breath. First aids were ministered by a missionary of the Fraternidade, with the help of policepersons. After the procedures, which included mouth resuscitation, the immigrant was reanimated and taken to hospital in an ambulance. The whole event took place in the dark, as the shelter was powerless since the beginning of the night. 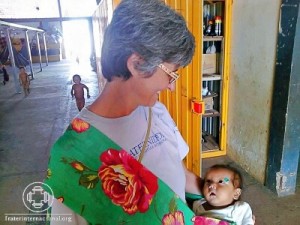 Activities with mothers and babies

Distribution of personal hygiene materials for the immigrants of the shelter, and cleaning of container where the action had occurred.

Artistic activities with the children in the school and cleaning of the place.

Organization of the closets of school and educational material.

Nail-trimming of the children.

Help to the mothers of babies in the harmonization of areas where the newborn stay. 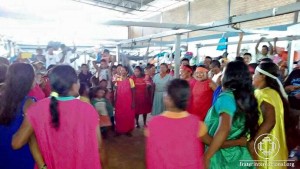 Dance at the welcoming to the UNHCR team 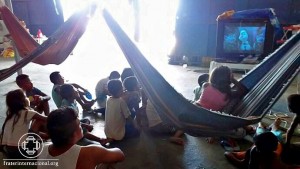 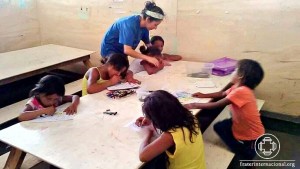 Children at the CRI school 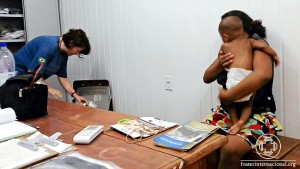