Humanitarian Colombia Mission has begun to help the Venezuelan walkers

Many Venezuelans keep abandoning their countries as they can. They seek to escape the food shortage, the lack of jobs, of medicines, and an escalating inflation. A great part of them do it via Colombia. On foot, due to lack of money, even for a bus ticket. They arrive at the border by walking, and as they cross it, they continue their trip in the same way. Exhausted, with empty stomachs and with the shoes they have. 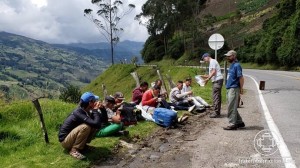 Already in Colombian territory, most of them begin the crossing on the Northeastern city of Cucuta. To goon means to climb an average altitude from 300 meters (Cucuta) up to 4,300 meters in the maximum height of Paramo de Berlin, located in the Colombian Andes, 145 km from the border. It is the hardest step, for the height and its icy night temperatures, to reach Bogota, the Colombian capital, 556 km from the starting point.

This was the harsh reality that the missionaries of Fraternidade – International Humanitarian Federation (FIHF), found, in the context of Humanitarian Colombia Mission, during their first contact with the walkers, groups of Venezuelan migrants that embark on this desperate adventure along mountainous highways not conceived for this form of trip. 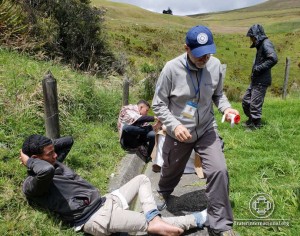 The humanitarian missionaries, lodged in Cucuta, transferred on October 14, Sunday, to Pamplona, 75 km South. In this place they watched, to the side of the path, some 60 walkers, they offered hot soup, water, emotional support and first-aids.

“We met many with blisters and wounds on the feet, due to the long walk and the lack of adequate footwear”, began telling Friar José de Arimateia, of Grace Mercy Order and doctor, one of the members of Humanitarian Colombia Mission. “Some had great difficulty to keep walking, they suffered decompensation and physical-muscular fatigue. Through reports, we were informed of cases of hypothermia and altitude sickness”, continued the professional.

He also highlighted that lack of medical attention increases as the migrants climb the mountains, because they reach farther and farther from villages and towns. 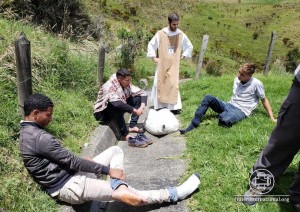 “We have been able to heal many wounds on feet. We could also offer support for the emotional part, which is obviously deeply affected, due to the conditions in which they have to leave their country: without known destination, without money, without food. We try to welcome them, to renew their faith and courage, so that they can keep walking and reach their destiny”, told Imer, another pioneer of Humanitarian Colombia Mission.

“They embark on this long walk without any protection for the feet nor for the cold, which takes them by surprise in the middle of the path, with temperatures of 0º at dusk. They are about 300 to 400 people daily doing this trajectory. We brought food and First-Aids case to help them”, continued the missionary.

“I got impressed by seeing them suffer so much, walking with swollen feet, climbing the mountain with suitcases on their head and on their back. Tired, and with their morale on the ground. And after the little something we could give them, seeing them leave with a smile filled my heart with joy and love”, commented José Luis Fuentes, another volunteer. 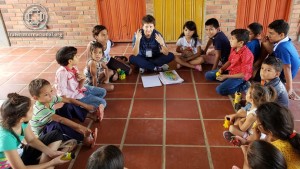 In parallel with the task of support to the walkers, other members of Humanitarian Colombia Mission continued the activities developed for the children attended by Catholic Father Francesco, of the Scalabrinian Congregation, in La Dolorosa Parish.

The Humanitarian Colombia Mission is the second endeavor of Fraternidade – International Humanitarian Federation (the other is Humanitarian Roraima Mission), that seeks to help the Venezuelan migratory crisis. The one in Colombia began October 11, with the intention of becoming another permanent space of help, for the relief of pain. For this it needs the support of everyone. Join this campaign of love.

In order to know how to collaborate,