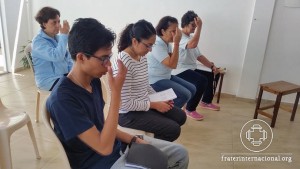 A house of prayer open to all people, without distinction of creeds, was installed in the town of Carmo da Cachoeira, Minas Gerais, Brazil. It is the House of the Children of Mary “Our Lady of the Poor”. It offers hours of group prayer and a secretary to attend to the spiritual needs of all pilgrims.

“At the moment, we have the following hours of prayer: from Monday thru Saturday, at 10 a.m. and at 3 p.m., and on Sundays at 9 a.m. and at 3 p.m. People can also come in other moments, with previous communication with the secretary”, informed the coordinator of the Children of Mary, mother Ana Catalina, a nun of the Grace Mercy Order. 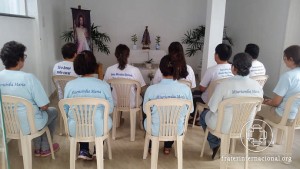 Children of Mary in prayer

The House “Our Lady of the Poor” also began ecumenical meetings of prayer in some homes of Carmo da Cachoeira, downtown and in the neighborhoods of Bom Retiro, Cambuci and Morada do Sol. It also scheduled an hour in the House of Mary Rose of Peace, feminine headquarters of the Missionaries of the Fraternidade – International Humanitarian Federation – located in the neighborhood of Saint Joseph, where the meetings take place on Thursdays, at 2 p.m. Another place of prayer is the Cenacle of the Sacred Family, in the communitarian refectory of the House of Light on the Hill (House 3), on Saturdays, at 2 p.m. “With much simplicity, we pray the Holy Rosary. We invite all the consecrated Children of Mary and all the people who want to join this task of love to do it wholeheartedly. The addresses, schedules and other details can be requested in our secretary”, explained mother Ana Catalina. 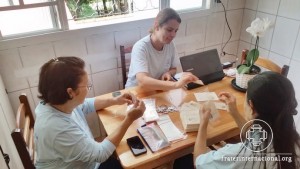 Preparing sacred objects for their distribution

Another task that the House “Our Lady of the Poor” conducts is to give guidance and all the necessary support to the pilgrims who come for the first time to Carmo da Cachoeira to visit the Marian Center of Figueira. It also serves as a base for the making and distribution of sacred objects (rosaries, scapulars, medals, wristbands, etc) and of the clothes of the Children of Mary.

Patroness of the Children of Mary 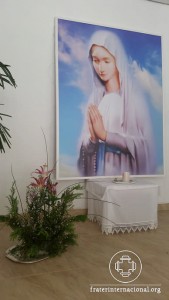 Our Lady of the Poor

“This is not a new church, this is the house of your Holy Mother, the Mother of all poor, the Mother of all those who lack something”, clarified the Divine Mother in a message that She transmitted on March 13, 2017, through Sister Lucía de Jesús, a visionary nun of the Grace Mercy Order. “The Lady of the Poor, the Patroness of the Children of Mary, will be the terafim, the working tool through which their daily prayers will obtain greater results for the whole planetary life”, concluded the Divine Messenger (Read the whole message here).

This house “will have the mission of creating for this town, for the nation and for the world a most potent planetary cannel of prayer”, the Saint continued to explain in another message transmitted on the same day, by means of Friar Elías del Sagrado Corazón, a visionary monk of the Grace Mercy Order (Read the whole message). 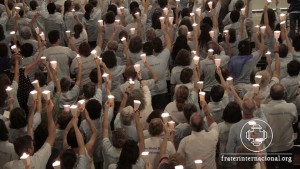 Third Annual Meeting of the Children of Mary

On the previous day, March 12, 2017, the Virgin transmitted through Friar Elías del Sagrado Corazón a message celebrating the third anniversary of the Children of Mary. In it She described that “the Lady of the Poor is My Face of humility and of surrender for the poorest among the poorest”. She mentioned among others the poor in faith, the orphans, those who have lost all hope, those who do not pray, the ones who have lost the love for God, the marginalizes and the enslaved, the children who are sold and exploited, those who have gone mad, those who live and sleep on the streets of this world, the poor women that sell themselves on the streets, the Indigenous consciousnesses that have lost their culture and their land in these times, the elders who are rejected and who do not feel loved, the youths who have been conquered by temptation and deception, and all the essences that do not fulfill their mission on this Earth (Complete message). 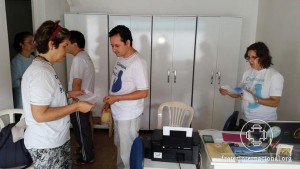 Preparations for a task of dissemination

The first apparitions of Our Lady of the Poor took place in the year of 1933, in Banneux, a little and impoverished little village of Belgium. There, the Virgin made eight apparitions, between the 15th of January and the 2nd of March, to Mariette Beco, a humble eleven-year old girl. She also consecrated a wellspring for the healing of the sick of all nations. The apparitions were recognized by the Vatican in 1941. The place of the apparition is visited annually by about 500 thousand pilgrims. All this data was gathered by the North-American Ingo Swann in his book “The Great Apparitions of Mary: An Examination of Twenty-two Supranormal Appearances” (The Crossroad Publishing Company, New York).

The House “Our Lady of the Poor” is located at:
Rua Padre Godinho, 245, Centro, Carmo da Cachoeira, Minas Gerais, Brasil