Group prepares itself for mission in Mariana, Minas Gerais, Brazil

Missionaries of Peace and members of the Solar Group of attendance to the emergencies of the Fraternity – International Humanitarian Federation prepare themselves to go to the city of Mariana, Minas Gerais, Brazil.they are going to help take care of animals victims of the disaster occurred on November 5, when the breaking of dams provoked a flood of mud in the district of Bento Rodrigues and affected other municipalities of the region.

The groups that consists of two members of the Solar Group and six missionaries of peace will leave the town of Carmo da Cachoeira, Minas Gerais, Brazil next week bound to the region of the disaster. “It is a trip of recognition of the situation, of feeling the necessities and later to send the help that they need, but if there is a possibility of already doing some work, we will be available, explains Ricardo Baumgartner, one of the coordinators of Fraternidade – International Humanitarian Federation. 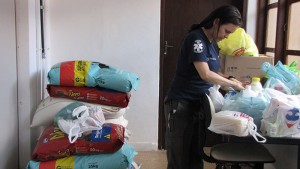 To Helentiana de Paiva Gonçalves, one of the members of the Solar Group that are going to Mariana, the spiritual task is always present in the group: “Besides the material help, we go with open hearts to do what is necessary. Even doing what nobody wants to do”.

About one ton of animal feed has been raised.the group has also received donations of blankets, veterinarian material such as syringes and disinfectant soap, as well as hygiene and cleaning material.

The most needed donations now are:

Deliver your donation at the World Headquarters from November 17 through 22 or get in touch with us: