Greece Mission – Intense Support to Clothes Storages for the Needy

“Humanitarian service is a way of balancing the serious faults that humanity commits today” (Message transmitted by the Virgin Mary to the visionary Friar Elías del Sagrado Corazón, of the Grace Mercy Order, in Feb 9, ’16).

On the first week of the year, the collaborators of the Planetary Network-of-Light continued the assistance to the Sisters of Charity and to Caritas Hellas, in Athens, as well as to the Orthodox Church of Saint Theodore in Anavissos. Those collaborators have been responsible for the missionary base of Fraternidade – International Humanitarian Federation since September 2017. 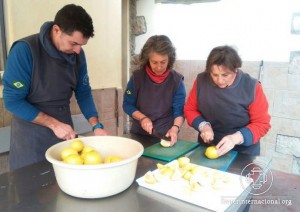 The volunteers helped the Catholic religious to fix and serve breakfast and lunch for the people who attend the place: Greeks of little resources and refugees from abroad.
They also accompanied them in a visit to a detention center for persons without documents, when they delivered fruits and other foods, as well as sweets for the children.

At Caritas Hellas they helped in the refectory and then began the usual task of organizing the clothes for donation and of accompanying the distribution of male clothes.

They also collaborated in the clothes storage of the volunteers association of Lagonissi, with which they have been working since June 2017. In this place they selected the clothes and harmonized the space. 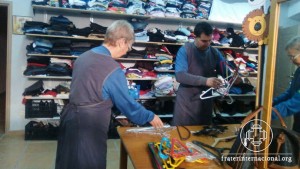 The group began the week helping the organization and distribution of clothes at the headquarters of Caritas Hellas. They joined a group of voluntary youths that come from France and from the United States.

On Tuesday and Friday, they were with the Sisters of Charity, cooperating in the elaboration and distribution of food, as well as in the preparation of bags of food and personal hygiene articles for the visits to the prison. They also disassembled the manger and the Christmas decorations.

On Sunday, the missionaries went to the Orthodox Church of Saint Theodore, in Anavissos, where they helped serve lunch for 100 people. 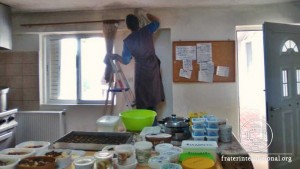 A strike in transportation in Athens caused delays at the beginning of the week. The missionaries began their activities at Caritas later than usual, one of them in the kitchen, and the others in the organization of clothes and of spaces.

On Wednesday, there was distribution of clothes at Caritas. The missionaries used the opportunity to do a more intense work with clothes and footwear.

On Tuesday, the group accompanied two Sisters of Charity to a female prison. There, the nuns visited a prisoner who had just had a baby.

On Saturday, the missionaries gave support to the Orthodox Church of Saint Theodore, in Anavissos. They fixed the food, cleaned and organized the pantry, and did a deep cleaning in the kitchen; they also helped organize the clothes. 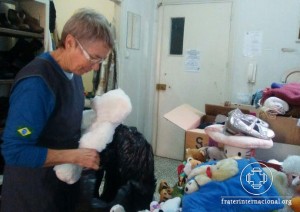 On Monday the group Split in two to serve at Caritas Hellas: one part organized female clothes and footwear in the main building, and the other worked in a second clothes storage.
In the main building arrived some mothers with their children seeking clothes. While they chose what they would take, the missionaries took care of the children.

On Friday, the missionaries of Fraternidade, besides helping the usual tasks of the kitchen and refectory, accompanied the Sisters of Charity in the exercise of Adoration to the Blessed Sacrament for some hours inthe afternoon, in the chapel of the place.

In this week there was a lot of movement at Caritas Hellas. Many voluntary youths came, and it was possible to organize a good team work. Also many donations of clothes came to be organized and a great number of clothes articles were distributed to the refugees. The group did cleaning tasks and renovation of furniture.

On Friday, the group participated in the exercise of Adoration of the Blessed Sacrament, in the place of the Sisters of Charity, and in a special mass for the Day of the Virgin of Candlemas, with procession of candles. 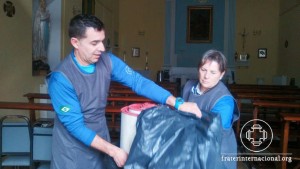 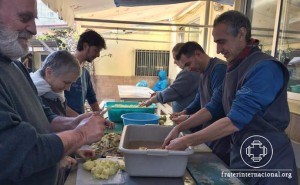 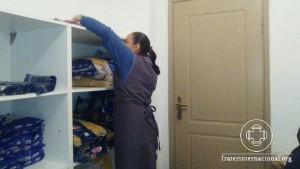