In this second week of May, the missionaries gave support in both houses of the Sisters of Charity of Mother Teresa of Calcutta. In House 2, they conducted a little volunteer group service to repair the closets that are used by the women that are welcomed in the place. In House 1, the missionaries conducted tasks of maintenance, such as painting and different repairs, including that of the benches used in the refectory, and separated clothes for donation.

The missionaries of the Fraternidade – International Humanitarian Federation accompanied the Sisters of Charity in the visit to a masculine and feminine prison, in the city of Athens. The group talked with women of different nationalities, that come mainly from countries of Africa, Eastern Europe and Asia, and who are imprisoned for different reasons.

A number of immigrants is attracted by false promises of work, made by some groups, and when they arrive in Greece they have to face a different reality from what had been promised. They end up jobless, illegal in the country and oftentimes they are imprisoned, seeing frustrated the illusion of a new life or of from there to be able to continue to other countries of Europe.

The group continued with the work of organization and distribution of clothes and footwear at Caritas Hellas, a support that has been constant with the refugees. The institution receives volunteers from various countries, and has a very important work in Greece. In this week, the missionaries worked with two Chinese women that fled from China due to religious persecution. They are currently enrolled in local colleges, to study.

On Saturday, 11, a work of cleaning was done in the road of the building of Caritas Hellas, where more than 500 people pass daily.

Nowadays, Greece receives immigrants from more than one hundred nationalities. A place of convergence due to a fascination, an illusion of a better life. It becomes evident that only a minority of the immigrants really manages to settle down with dignity, whether in Greece, or in neighboring countries. 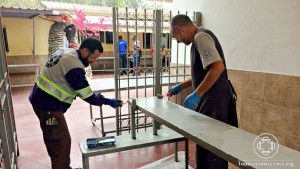 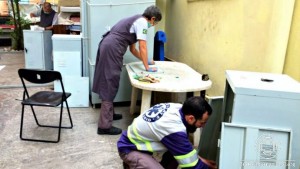 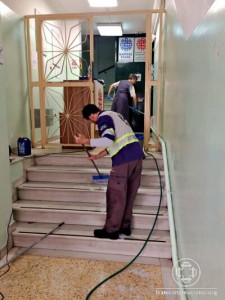 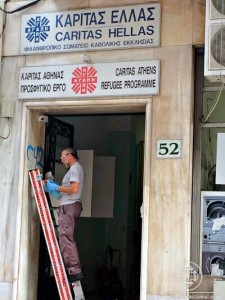