With the intention of stimulating a continuous improvement of living conditions in the refuge of Venezuelan migrants “Tancredo Neves”, Fraternidade – International Humanitarian Federation (FIHF) organized an event of reflection with women who dwell in the place. The activity is part of Humanitarian Roraima Mission. It was conducted in Boa Vista, state of Roraima, Brasil, in one of the three shelters where the organization provides services, in collaboration with other institutions.

The meeting was held on Friday, August 31, 2018. Thirty-five of the 50 women who share the site with 250 men participated of the event. “We analysed women´s role as organizer, integrator, promoter of healthy guidelines for their partners and their environment”, commented Angélica Baglivo, the coordinator of the tasks of Fraternidade at the “Tancredo Neves”.

The participants were very willing to participate in a collective task where all collaborate to maintain the cleaning, order and harmony in the place. They spoke about the difficulties to maintain cleaning in the different sectors, such as in the women´s restrooms; as well as the lack of conscious in the correct use of materials and in the use of the garbage cans for the disposal of waste.

Angelica explained that there are always meetings with small groups to deal with specific issues, but this time, it was the first meeting of a series of fortnightly meetings, planned to be organized with all the women in the shelter to debate matters of general interest. 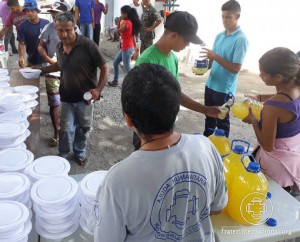 The meetings aim to improve the work conducted by residents of the shelter in the sectorial committees, such as cleaning and maintenance, as well as food. The first one coordinates the sector´s tasks and is responsible for the integration of the work teams, whereas the second one organizes the distribution of the three meals delivered daily by the Brazilian Army, within the framework of the Operation Reception, of the Federal Government.

Fraternidade has been collaborating in the management of the shelter since March of this year. In April, the place went through a restructuring and reorganization, becoming temporary housing for single men and couples without children, so that its population was reduced on average from 750 to 300 people.