What can we do to treat and use water – that vital substance, still so wasted and disrespected – in a more conscious and economical way?

To go deeper into this reflection, it may be useful and instructive for us to learn about projects with the goal of sustainability in the management of water resources.

For this reason, let us study a little about the work developed for more than 30 years, of the Light-Community of Figueira, affiliated with the Fraternity – International Humanitarian Federation (FIHF), located in Carmo da Cachoeira, in southern Minas Gerais, Brazil. 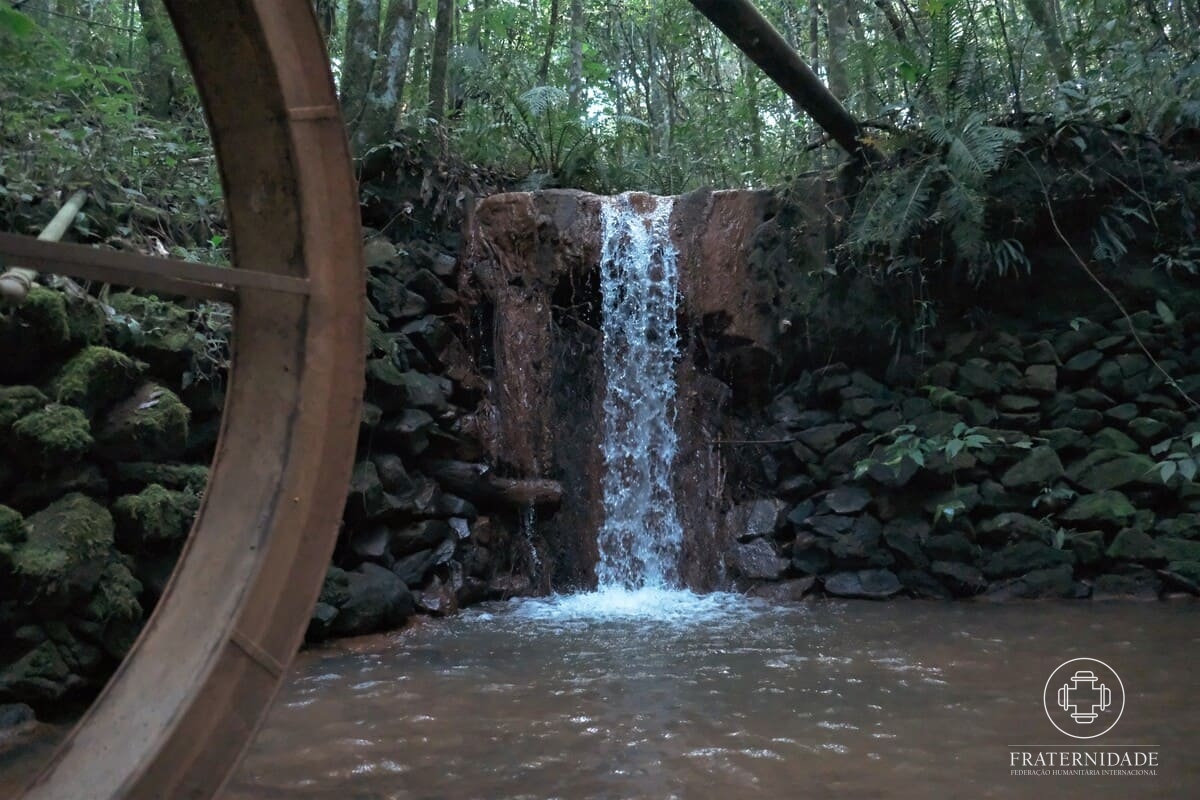 Figueira has already inspired thousands of people from different countries to modify their patterns of behavior concerning the natural elements, especially water, through the dissemination of principles related to the physical and spiritual regeneration of life on Earth.

With the instruction and the daily experiences offered in the community, visitors and residents are stimulated to awaken their love and reverence for this essential substance. The main purpose is that everyone can become transforming agents, helping to disseminate a more ethical and responsible attitude concerning water.

Unconditional giving of self and sacrifice 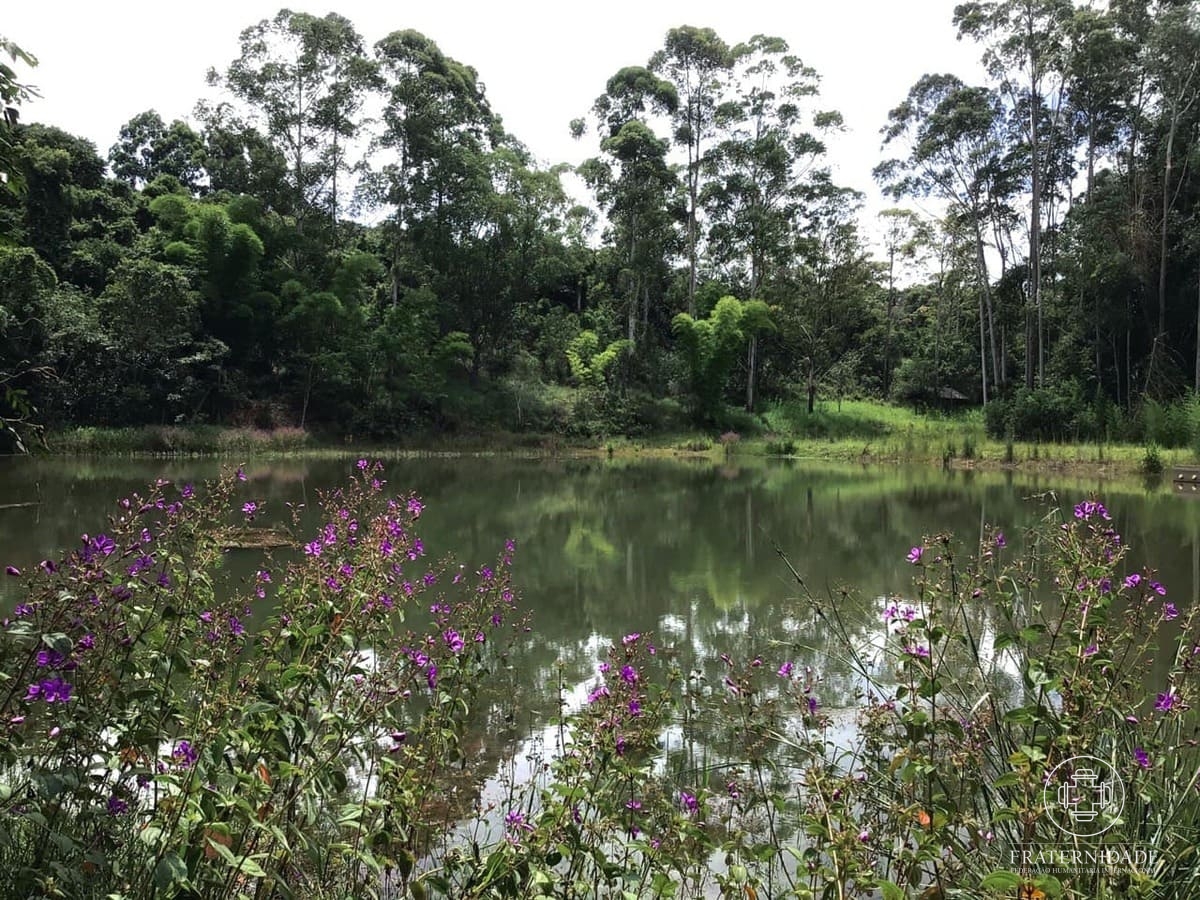 Water, a malleable and adaptable substance, covers more than 70% of the globe; makes up about 70% of the human body, and is essential for all beings alive on Earth.

If we study its behavior, we perceive that water symbolizes the virtues of unconditional giving and permanent sacrifice. That is especially obvious in these times, in which the waste and contamination of water through sewage, chemical products and miscellaneous waste have reached alarming levels.

Even so, in spite of being treated without due gratitude, care and reverence, water continues to offer itself without limits to provide us with all our needs and to be with us in practically every moment.

Saint Francis of Assisi, one of the elevated consciousnesses whose teachings are studied and followed in Figueira, exalted one of the main attributes of water in his “Song of Brother Sun.”

“Praise be, my Lord

Which is very useful and humble,

Is precious and chaste.”

In effect, water is essential in all areas of physical existence and gives itself generously and simply to carry out any task, from the most noble to the most basic and primitive; therefore, it is useful, humble and precious. And its chasteness can be seen in its purity, clarity and transparency.

Have you stopped to think that the water on the planet has been the same for millennia? Its amount does not change, only its quality. Day after day, this substance is in constant transformation.

Of all the water that exists on the planet, only 2.5% is sweet water. Meanwhile, only 0.26% of that water is available for human consumption, since a large part of this restricted percentage is polluted.

One must also remember that it is not evenly distributed on the surface of the globe. Therefore, it is a scarce resource in various locations. These are some of the reasons why we must not waste a single drop of this sacred substance.

The use of water in Figueira

And now, how about understanding how water resource management occurs in the Light-Community of Figueira?

Hélcio Drago, in charge of the water supply in the community, explained that process. “All the water consumed in the farms of Figueira is obtained through an alternative supply system, which is to say, it is not provided by a public supply system,” he emphasized. 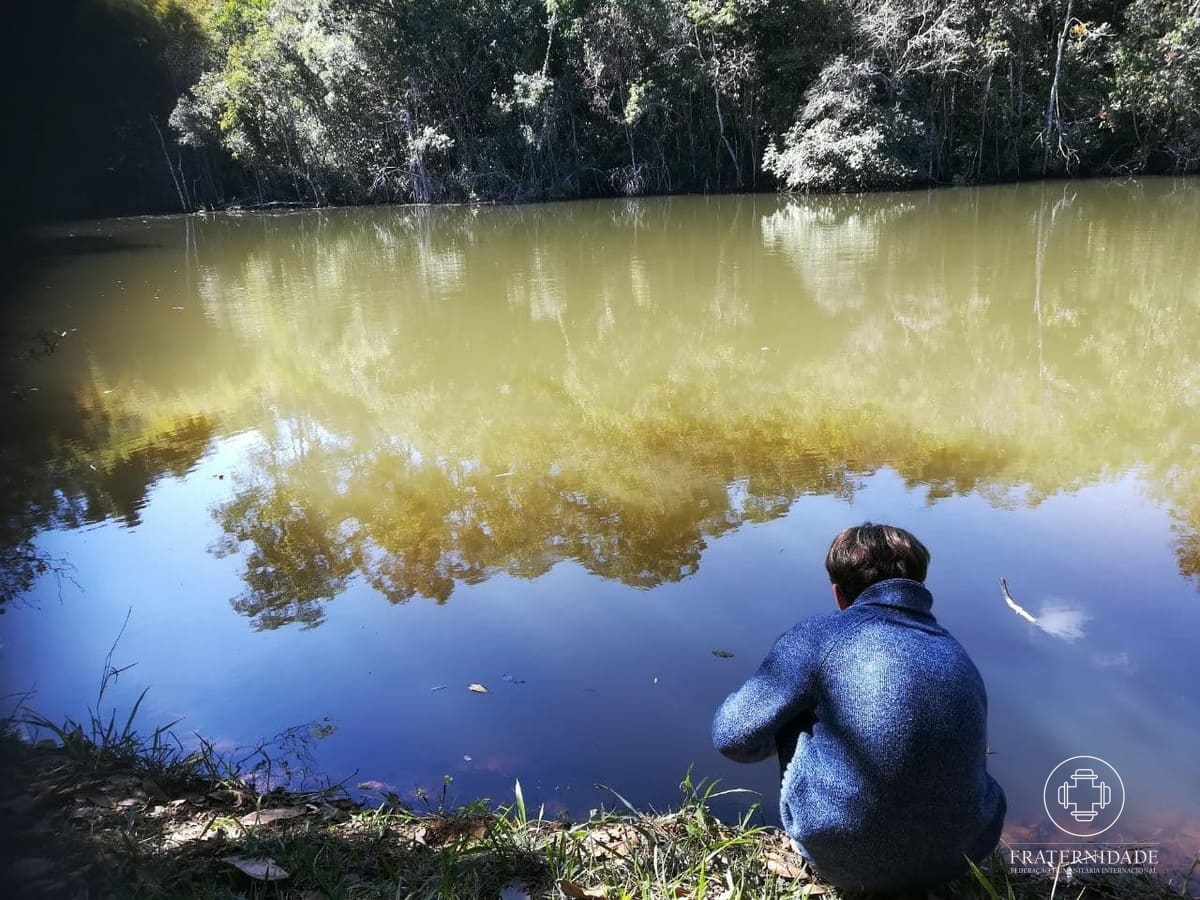 In general, potable water is captured from the artesian water table by means of deep tubular wells and, from the groundwater table, through cisterns. It is used for drinking, food preparation and personal hygiene.

The monitoring of the quality of the water for human consumption is done periodically through analyzing samples in accredited laboratories, according to the drinking standards of the Ministry of Health.

Non-potable water, on the other hand, is mostly collected from artificial dams. It serves for irrigation, cleaning vehicles and flushing toilets. 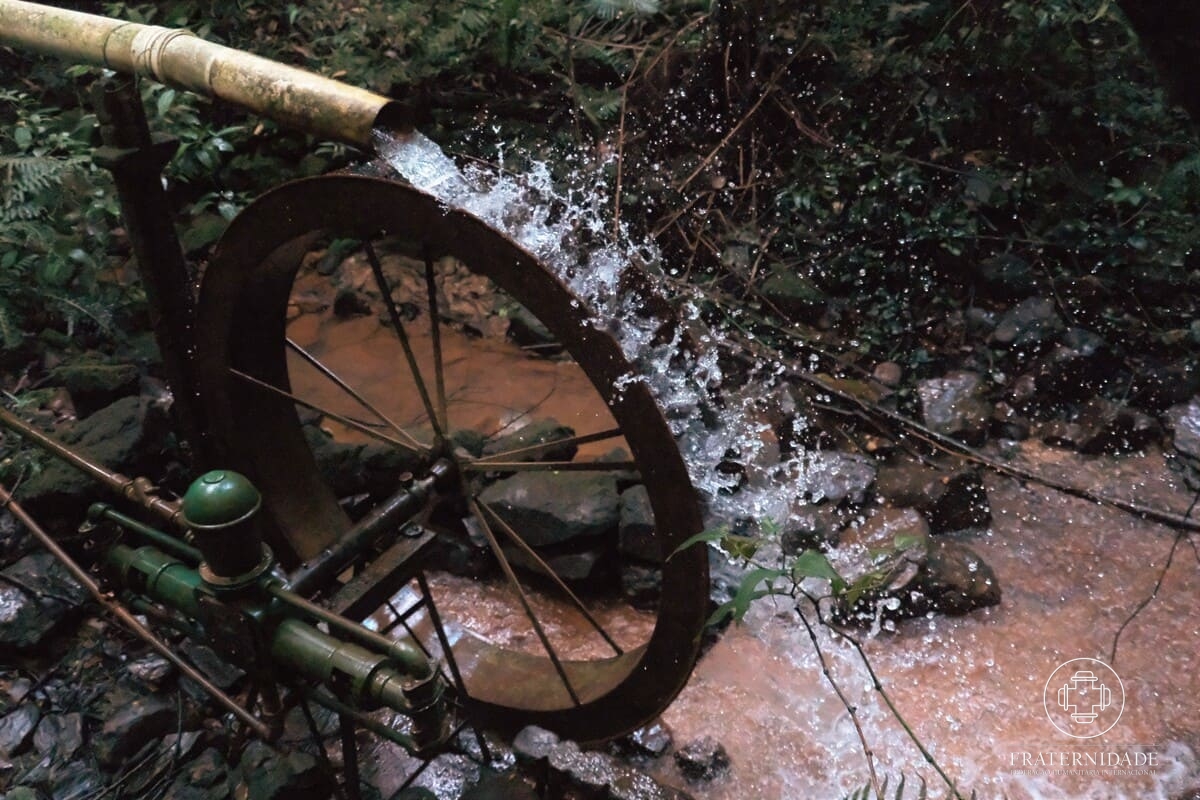 In Figueira, the points for consumption of water are located at a higher level than the points of collection. As a result, it’s necessary to transport and store the water. During transportation, various kinds of pumps are used, such as the piston, powered by water wheels, and the centrifugal pumps, which require electricity.

Electricity for this is supplied by the local electrical utility or by solar generators. However, aiming for self-sustainability, the intention is to adopt solar energy as the main source of electricity in most of the pumping facilities.

There is an extensive distribution network so that the water can reach all the consumption points, made up of reservoirs, pipes and accessories. There are cases in which that network interconnects various farms, making it possible for the water collected and pumped in one area to be consumed in another.

Wastewater, which is to say, what has already been used by people, is destined for treatment and divided into two kinds:

The black water, coming from the toilets, passes through a sewage treatment system before going into drains for infiltration in the subsoil.

Those sewage treatment stations are made up of septic tanks and anaerobic filters, devices that have the function of reducing the polluting loads of the sewage, returning the effluent, treated to the standards required by environmental legislation, to the environment.

Grey water is what has been used in bathing, washing clothes and the cleaning of food. Its destination may be the sewage treatment station or the alternative treatment systems such as the banana plantations, grown on several farms in Figueira.

So that the alternative system for the water supply can function adequately, there is ample planning between the Figueira Water Sector and each of the farms that make up the community.

Since 2013, the use of water in each area has been monitored by reading water meters. A team does a periodic inspection of the whole supply system, including collection, pumping, storage, distribution and treatment. In this way, it’s possible to prevent the need for repairs.

The region where Figueira is located was also affected by the changes in the hydrological cycle, most caused by deforestation and the incorrect use of the soil.

In recent years, rain has started to occur at increasingly spaced intervals and has decreased in volume. This reduced the level of the water table in the territory and consequently, the level of the reservoirs and the water available for surface collection.

To minimize this situation, Figueira is implementing rainwater collection and storage systems. The main purpose is to collect this water so it can be infiltrated into the subsoil of the farms.

Examples of the use of rainwater

On one of the farms of the community, the level of the reservoir closest to the buildings dropped dramatically as the springs that supplied it dried up. As a solution, dams were built around the reservoir to retain and infiltrate the rainwater into the subsoil.

This made it possible for the water of the reservoir to be used, during one year, as irrigation for the orchards, which before had been watered with potable water from an artesian well. An additional benefit of the project was the increase in the flow of a second reservoir, responsible for driving three water wheels that provide potable water for the buildings.

On another farm, it was necessary to intervene to avoid the reservoir completely drying up. The rainwater was then collected from the tiled roof of the main building and in the surrounding areas, and channeled to the restricted dense forest upstream from the dam, creating conditions for the water to seep into the soil.

Reforestation of the area of the springs

Currently, Figueira has six active springs. According to Brazilian legislation, the surroundings of those sources of water is considered an Area of Permanent Preservation, which must have a minimum radius of 50 meters (3/10 mile).

To protect those areas, the Plantings Sector carries out a specific work.

“Here the surroundings of the springs are preserved according to the law and reforested with native vegetation,” explained Friar Renatto, coordinator of the sector.

The reforestation, with native flora genetically adapted to the region, avoids the drying up of the springs. Besides that, it stops the erosion and the silting of the soil, which also compromise the quality and quantity of the water.

The Plantings Sector fills another important role in the protection of the water resources of Figueira. All the food grown in the community is organic; that is to say, it is produced through sustainable agricultural systems, which do not employ chemical products detrimental to human health and the environment, nor do they use transgenic seeds.

This kind of production, which advocates the balance of nature, avoids the contamination of underground and surface water with pesticides, contrary to conventional agricultural models.

According to the Brazilian Institute of Geography and Statistics (IBGE), pesticides are the second greatest cause of contamination of the rivers in Brazil, coming second only to domestic sewage.

The healing and restorative power of water has been studied and applied for many years in Figueira. The farms offer outdoor showers, using the water collected from the reservoirs. On its part, the Healing Sector carries out therapeutic procedures, such as immersion baths, baths for the stimulation of specific parts of the body, steam baths, sitz baths, and enemas.

“When we are in contact with water during a therapeutic procedure, such as an immersion bath or an outdoor shower in nature, in the material bodies – physical, emotional and mental – we stimulate impulses of healing that can promote purification, regeneration, tranquilizing, and even the upliftment of the consciousness. Those impulses impregnate from the tiniest organic particle to the most ingrained thoughts, dissolving nodules and resistances.”

The Mother also adds that the effectivenness of the treatments is also related to the attitude of the patient, who must gratefully recognize and revere the service given by the water.

“Water represents the flexible path that the human being must travel. It is the vehicle through which transformations occur that generate life. As a symbol of the principle of motherhood, it does not exclude anything, it just moves things in the correct flow toward a sea of possibilities.”

Connection with the Kingdom of Water

Would you like to collaborate in the recovery and preservation of water resources?

Simple daily acts are more important than you can imagine!

For the finish, we give you a mantra, connected to the indigenous consciousness, which leads us to a connection with the Kingdom of Water:

With the essence of this mantra in our heart, may we achieve a relationship of love, respect and union with water, collaborating to protect and restore this gift that is the sap of the Earth.