At about mid-night, local time, there arrived in Cairo the seven missionaries of Fraternidade – International Humanitarian Federation (FFHI) that will participate in Egypt Mission. 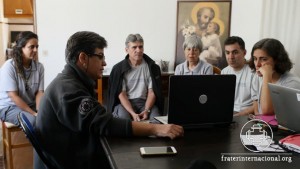 The field tasks will begin in the morning of the 15th, Friday, in a house that shelters elderly persons of low income. Egypt Mission will extend until next 24th, and, in this period, the missionaries will also render service in a house for poor children, in a marginalized neighborhood of the Egyptian capital. Both places are administered by the Sisters of Charity.

The group of FFHI is composed of five Brazilians and two Portuguese. The South-American missionaries left Brazil on Monday (the 11th), and arrived in Portugal the following day, in the afternoon. They were lodged in the new Missionary House of Fraternidade, located in the city of Fatima.

On the 13th, the missionary group, already with the presence of both volunteers from the Network-of-Light of Europe, gathered for a meeting of attunement and of organization of the missionary task to be fulfilled in the African country.

To collaborate with this initiative for Peace in the Middle-East, click here.