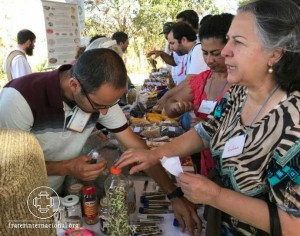 The schedule had the participation of the choir of the Community-of-Light of Figueira, which opened the event at 8:30 a.m., presenting three songs.

Then there were lectures about various topics, including: production of seeds of greens, ecological handling of soils, and spirituality with native and organic seeds. This last subject was developed by Friar Luciano, from Grace Mercy Order, responsible for the Seeds Sector of the Community-of-Light of Figueira.

Besides the lectures, were offered workshops and field visits to the House of Seeds and to the Agroecology Sector of Ifsuldeminas. During the event, also the Seeds Fair took place, in which the participants, had the opportunity of exchanging pure seeds. 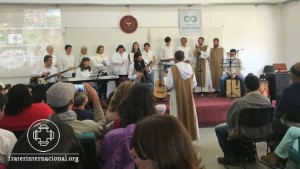 Presentation of the Choir of Figueira

Zara repported that the group brought to the Community-of-Light of Figueira, where she resides, seeds of a variety of corn of more than 12 thousand years of age, known as Donkey’s Tooth, as well as the variety Maizena. Both materials were exchanged by carrot seeds. The group also brought seeds of black guandu and seedlings of Yacon potato, Arracacia xanthorrhiza and arrowroot, which were exchanged by peanuts seeds.

The event had the participation of 400 people, including organic producers of the region. 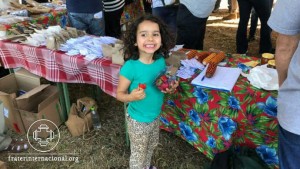 Ana Clara: “The strawberry is delicious”

According to Samantha Aggripino (Mira), family producer from the Karmel property, rural zone of Carmo da Cachoeira, Minas Gerais, the most striking aspect was to find so many people with the common objective of protecting and being guardians of native seeds. She participated in the event with her husband Marcos and their daughter Ana Clara, age 4.

“I made many friends. I feel we are true friends indeed, because they were encounters that we know are soul encounters, of very dear people, who are awakened to the importance of preservation of original seeds”, expressed Mira. Her little daughter confessed: “What I liked best in the Seeds Feast was the blue corn and the strawberries. I loved them. I ate a lot of strawberries and we exchanged blue corn”.