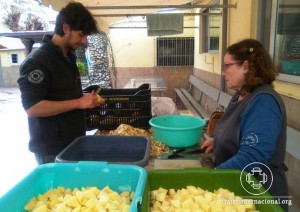 Collaborators from the Network-of-Light of Europe keep sustaining Greece Mission, a humanitarian service that Fraternidade – International Humanitarian Federation began in September 2016 to assist the refugees that come to Athens, seeking to escape the wars and economic crisis that devastate their countries.

The Greece Mission was carried out by members of the Matrix Group of Missionaries of Fraternidade until September 2017. Since then it is being run by the Network-of-Light of Europe. 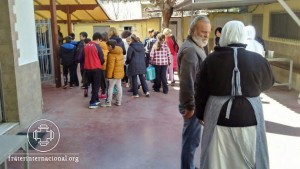 The Mission has a permanente basis in Palaia Fokaia, some 40 km SouthEast of Athens. From there, the volunteers of the Network-of-Light of Europe go to the Greek capital four days a week, to continue the services that the matrix-missionaries began in 2016.

On Mondays and Wednesdays they go to the main headquarters of Caritas Hellas, an organization of support to Greeks and immigrants of little resources; on Tuesdays and Fridays, they collaborate with the Sisters of Charity of Mother Teresa of Calcutta; on Wednesdays afternoons they help a Greek association of social assistance in Lagonissi, 13 km from the permanent base; whereas on Saturdays they go to Anavissos, where they cooperate with the Orthodox Church of Saint Theodore in its services to the poors of the region. 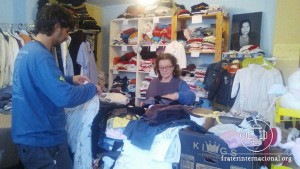 In February, the volunteers of Greece Mission kept helping the organization of donations of clothes received and distributed by Caritas Hellas. They also offered support in the kitchen and in the social refectory of the entity. On the last day of the month, they went to a hostal of the organization for refugee families, where they harmonized a deposit and assembled beds.

In the headquarters of the Sisters of Charity, they helped the ellaboration of foods, the harmonization of spaces and the distribution of lunch. They also accompanied the nuns in activities downtown Athens and in their visits to the illegal immigrants that are at special centers of detention, just as the common prisoners. They shared with the nuns some spiritual exercises of Adoration of the Most Blessed Sacrament and watched Masses conducted in the main house of the Sisters.

In the place of the Orthodox Church of Saint Theodore are developed tasks of maintenance, such as the organization of the storage of donation of clothes, the harmonization of spaces, the cleaning of the pantry, the kitchen and refectory, as well as support to serve breakfasts and snacks for needy Greeks. 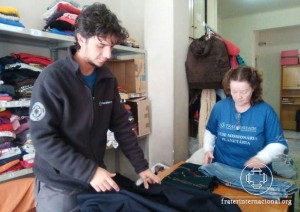 Another front of work is the Greek association of volunteers of the city of Lagonissi, with which Fraternidade keeps contacts since June 2017. The collaborators of the Network-of-Light of Europe continued their weekly work of organization of clothes and footwear.

The Greek association is devoted to help abandoned animals and to provide food and clothes to needy people.