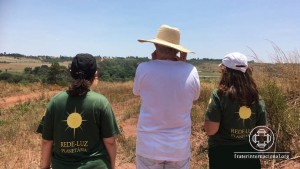 In March 2018, on the occasion of the 60th General Meeting of Figueira, in Carmo da Cachoeira, the purpose of founding a new Nucleus-of-Light of Figueira in Brazilian Central Plateau was revealed as part of the Evolutionary Plan. At that moment, members of the Network-of-Light of Federal District began to work to manifest the design of the Divine Hierarchy.

After a member of the Network-of-Light of the Federal District donated to Figueira in September 2018, the lands of their property for the manifestation of the new Nucleus-of-Light, the members of the group of Figueira in Brasilia, FD, together with the brothers and sisters of Barra do Garças, MT and of Alto Paraíso, GO, gathered to begin the construction, to adequate the lands and lodging of the property to the planning of another extension of Figueira 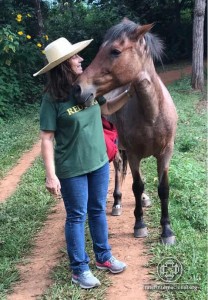 Located in Planaltina, FD, bordering Pipiripau River, the Nucleus-of-Light of Figueira in Brasilia, called Sacred Kingdoms, is destined to anchor, in the Center-West region of Brazil, the archetype of co-existence between souls of the Human Kingdom and of the infra-human Kingdoms.

“The Nucleus-of-Light of the Sacred Kingdoms must be a point of Light, where all the activities of Love and Service to the Kingdoms of Nature, together with the prayers and songs conducted, may generate, by means of all beings gathered there, a field of Light and Love, which must be radiated to the kingdoms of the whole planet”, stated Mother Asunción de María, of the Monastery of Mother of the Sun, of the Mercy Grace Order in Brasilia, FD, whose activities are gradually being transferred to the new Nucleus, with inaugurations expected for December 2018. 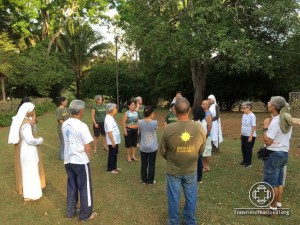 In the months of September and October, the members of the Network-of-Light of the Federal District participated in several group services of constructions, cleaning and repairs for the new facilities of the Nucleus, which is “a divine work that has the purpose of radiating all this vibration that was built here, besides receiving souls that need welcome, desperate amidst the chaos in our civilization”, expressed Neyde Barreto,  one of the coordinator of the Network-of-Light of the Federal District.

Another coordinator of the group, Helda Pinheiro, agrees and complements: “It is going to be a region of much love, much peace, light and prayer. This nucleus will be like an oasis in the Center-West for many lost souls, which need support. The Planetary Network-of-Light will have here, as one of its main activities, the goal of preserving the Kingdoms of Nature that exist here and that will have this place as a refuge, alignment. The Nucleus will have the role of anchoring Christic energies, fundamental for the new times and to manifest the new race”, she concludes.