Sphere Handbook – Shelter And Settlement: They are not numbers, They are Human beings

If you found yourself obliged to leave your home in a hurry, in the middle of a natural disaster or an armed conflict, where would you seek refuge for yourself and your family? When faced with this question, most people have no doubt: they would take refuge in the home of family or friends. To go to a shelter is not an option that  enters people’s minds. It is the last choice. But it is a reality for millions of people around the world. Wars, persecution, and natural disasters forced 71 million people to leave their homes, according to data of the United Nations High Commissioner for Refugees (UNHCR).

To obtain a roof to give these people shelter – even if it is made of canvas – is one of the main concerns of organizations involved in a humanitarian response. And it is exactly for this reason that the subject of a shelter is one of the pillars of the Sphere Handbook. The subject is dealt with in the section Shelter and Settlement in the course on Training of the Sphere Handbook, carried out by the Fraternity – International Humanitarian Federation (FIHF) since the beginning of May. 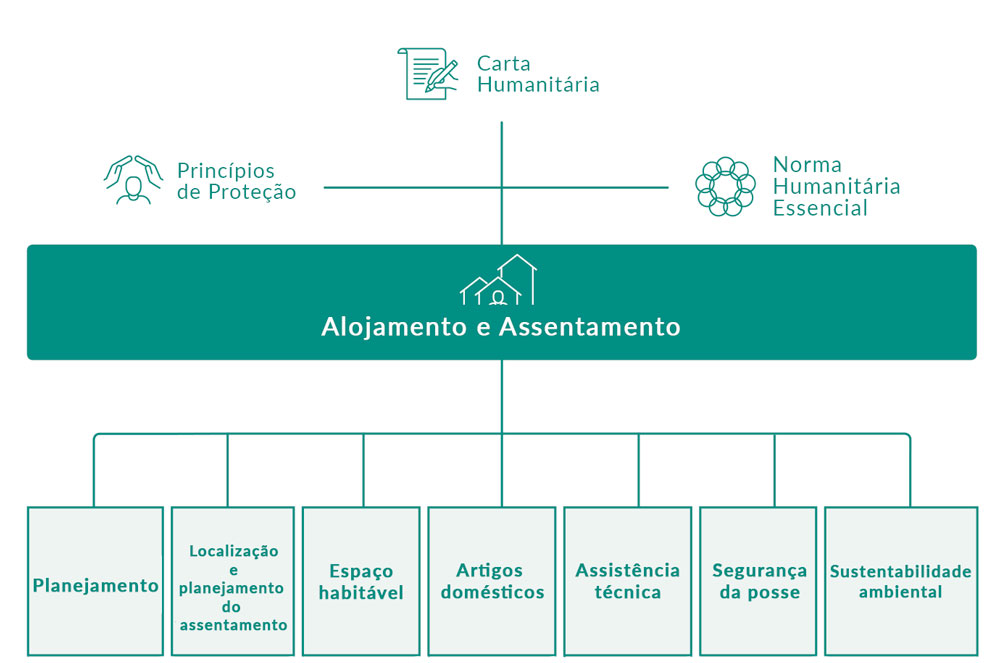 Although the number of people displaced from their native soil are in the millions, it is not about numbers. These are human beings. It is because it refers to lives, that the humanitarian assistants act in the sense of assuring the highest possible level of dignity and autonomy. Only when all other options are exhausted – homes of parents, friends, rented houses or government subsidized housing – does the idea of the refugee shelter come up.

The Sphere teaches that the shelter must provide protection from rain, cold or excessive heat, from illness, provide dignity and conditions of access to livelihoods. The humanitarian assistance organization, Catholic Relief Services (CRS) establishes two general goals in its Rapid Response Cycle, spearheaded by the Sphere: The first, for immediate application, is to protect lives. The second, over a medium and long term, is to rebuild lives.

The minimum standards defined in the Sphere Handbook express the right to adequate shelter in a humanitarian context, based on the principles, rights, and obligations declared in the Humanitarian Charter, which includes the right to live with dignity, to protection and safety, and the right to receive humanitarian assistance. The Sphere proposes that shelter and settlement must be considered together. “Shelter” is the household living space, including the items necessary to support daily activities. “Settlement” is the wider locations where people and community live,”.defines the Handbook.

The basic principles for achieving those goals are based on community life and technical assistance. In short, the timely response must save lives, and the shelter must be appropriate, support the family, community life, security and livelihoods. The Sphere Handbook lists seven minimum standards that must be followed in humanitarian responses that involve the construction of shelters (see chart). But it is important to emphasize that they are guidelines about what needs to be done. How to do it is something that must be analyzed case-by-case. 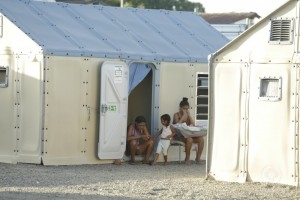 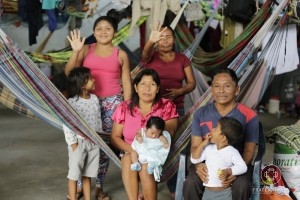 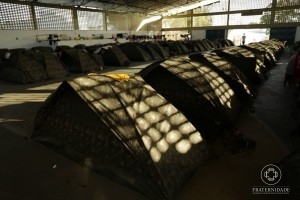 CHART: The 7 Standards for shelter and Settlement

Interventions in shelters and settlements are adequately planned and coordinated so as to contribute to the safety and the wellbeing of people and fostering their recovery.

The accommodations and settlements are located in safe areas, offering adequate space and access to services and essential means of living.

Assistance with household items, such as those used to prepare and preserve food, eating and drinking, maintaining thermal comfort, as well as those used for lighting and personal clothing, help to restore and maintain health, dignity, and safety.

Technical assistance, provided at the right and appropriate moment, helps people to recover on their own, improves the quality and safety of the accommodations and settlements.

This concept implies that people can live without the fear of a new forced eviction. For this, it is necessary to establish legal security, working with local authorities, lawyers and an inter-institutional forum to guarantee this right.

Helps to reduce the negative impacts of the settlement, attending to present needs without compromising the ability of future generations to meet their own needs.

There is nothing more permanent than a temporary solution

The Sphere shows that situations of exile or refuge can drag on for years and sometimes for decades. Examples of temporary solutions that extend over time are everywhere. In Brazil, this situation can be seen in the crisis of the Venezuelan refugees in Roraima. When the first group of missionaries of the Fraternity (FIHF) arrived in the state in November of 2016, they found a bleak scenario: a population of Venezuelan refugees living in the open, in the streets. The missionaries started a series of meetings with local and State authorities, and a month later, managed to house 300 indigenous  and 30 non-indigenous in the Pintolândia Sports Gym. It was the first shelter created in the state.

“There were innumerable challenges,” says the missionary Clara. “We acted from the heart, in the face of a scenario where we had to find all the solutions. We began setting up committees for food, health, safety, and long-term solutions. We listened to the refugees, held daily meetings with the chiefs. And little by little, we organized the place,” she recalls.

This action, within the seven protocols of the Sphere—in the sense of the action being articulated and coordinated, the search for a safe place, adequate space for essential services, among others—drew the attention of international organizations that began to arrive in Roraima over the course of 2017, mainly UN agencies, such as the UNHCR and UNICEF. In July, the UNHCR set up its office in Boa Vista and, in September, signed a partnership with the Fraternity (FIHF). “The missionaries heard from the UNHCR that the missions that preceded the setting up of the office showed in their reports that the Fraternity (FIHF), adhering to its way of acting and intuition, was following protocols that the UNHCR taught as international protocols, with the participation of the community in the response to its problems and in the forming of committees,” the missionary Clara said. 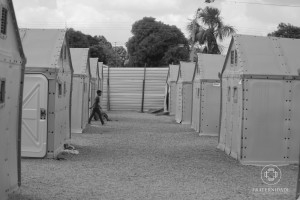 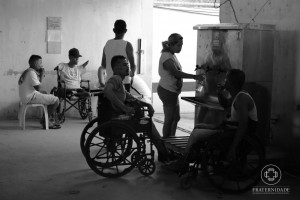 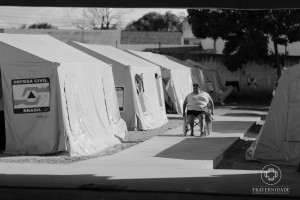 As from 2017, the flow of Venezuelan refugees to Brazil intensified. The number of immigrants living on the streets was a sign of a situation out of control. This was when the Fraternity (FIHF) was called to establish new partnerships with the UNHCR and take on the humanitarian management of the Janokoida Shelter, in Pacaraima, and the Tancredo Neves Shelter in the capital, Boa Vista.

It was in the management of this shelter that the missionaries were able to feel the importance of the actions described in the Sphere. When the Brazilian government began to take action in  response to the Venezuelan crisis, in March of 2018, through the Citizenship Ministry and the Defense Ministry, together with the UNHCR, the settlements went through a transformation. The refugees that were in the Sports Gym of Tancredo Neves were taken to a soccer field until the gym was remodeled. After three days, they returned to the settlement, already being managed according to the Sphere Handbook, as the missionary Clara recalls:

“Participating in the meetings, seeing the protocols, seeing the Sphere Handbook being discussed, defining the number of tents, how many bathrooms, how many people would fit, what the profile of the settlement would be, caused us to perceive the importance of a technical focus,” she says. “We were seeing a live demonstration of that set-up being transformed from a chaotic place, left to its own fate, into an organized place, where everything followed the standard protocols,” she describes.

Although many of the actions developed by the Fraternity (FIHF) were those recommended by the Sphere, it was from that point that the Handbook became fundamental to the actions. The results were obvious. The Fraternity (FIHF) had been invited to take up the humanitarian management of the Nova Canaã Shelter of Venezuelan families. The missionaries had the opportunity to follow the transformation of an empty space, provided by the city of Boa Vista, into a settlement where everything was planned and calculated: what would be the shelter area, the distribution area, the health area, the education area. When everything was organized, the missionaries began to receive the refugees. They were in the town square and arrived in the morning, after a night of heavy rain. 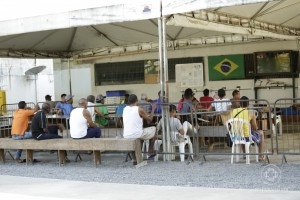 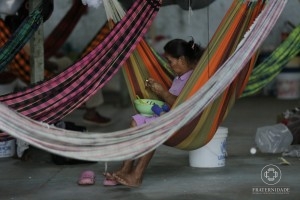 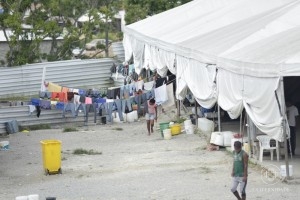 “The people were dirty with mud, they had lost their belongings. They received hygiene kits, mattresses and went to their tents. Most went straight to the bathroom to shower. When they came out, they said it was the first decent bath in a long time. We didn’t recognize people. The men had very long beards and when they reappeared, clean and shaven, we had to ask them their name and check which tent they belonged to. One of them said to the missionaries: “Today I finally managed to look in the mirror,” says the missionary Clara.

Seeing the happiness on the faces of people was a joy, reveals the missionary: “We were able to see how important it is when one reads in the Handbook that the giving of NFI products (non-food items, English acronym) changes the life of a person, of a refugee. We went through that experience in the Nova Canaã Shelter, of seeing everything from the beginning and seeing the results on people’s faces,” she says.