December 21 to 23, Thursday to Saturday 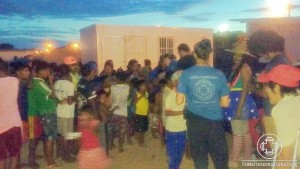 The blue container of the Center of Reference for the Immigrant was harmonized.

A four-day old baby received a cleaning of the eyes, done with serum. The missionaries also did the trimming of the nails of other babies in the shelter.

At night, a group of volunteers made the donation of soup and about 20 bags of clothes.

Missionaries of Fraternidade – Internacional Humanitarian Federation – went around the shelter, visiting the families, in the company of a new missionary. 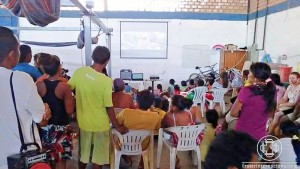 A film about Jesus was watched, lasting for two hours, and dubbed in Warao language. During the film popcorn was distributed.

“We made use of the moment of entertainment, in which many children, youths and women were watching the film, to gather the Aidamos (Indigenous leaders) and distribute the 20 bags of clothes that we received the day before. Each Aidamo received two bags to be distributed to his group”, said Alexandrina, a missionary of Fraternidade.

After the film, the gymnasium was cleaned.

A volunteer arrived at the CRI to learn about the place and offered to collaborate.

“She was so touched by what she saw, that she asked to leave and to help in a material way, with the donation of diapers and cleaning material”, explained Alexandrina.

Medicines was administered by missionaries. 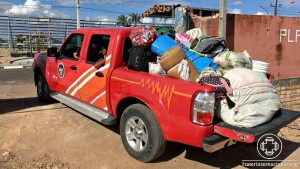 A team of the Epidemiologic Vigilance Department (DVE) went to the shelter and made several actions, such as quick tests of diseases (HIV and syphilis), vaccination, capillary glycaemia measurement, blood pressure measurement, and inspection of possible breeding areas of Aedes Aegypti mosquitoes.

In December, there is a movement of return to Venezuela on the part of the Indigenous people, and they carry a large amount of baggage and clothes.

“They affirm they are going to see their families for Christmas and New Year’s Eve. Some tents are empty and the structure for hammocks has less hammocks installed”, said Claudia, a missionary of Fraternidade. 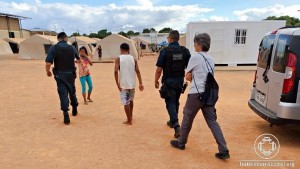 Going to the Police Station

Missionaries, accompanied by military policepersons and a couple of immigrants went to the Police Station, to make a police report about the fight of the couple in the shelter. The woman was battered by her husband.

Games with the children were conducted, as well as attendance to babies and conversations with the ladies in the shelter.

Two Young Physical Education teachers were in the shelter to learn about the place and offered to collaborate.

The office of Fraternidade in Boa Vista received 13 boxes of toys. The donations were made by the Associations of Venezuelans of Brasilia, and will be distributed to the children in the CRI. 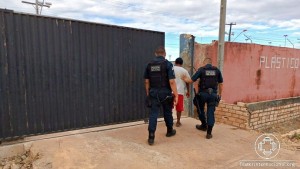 Drunk immigrant being escorted out of CRI

Cables near the TV sets in the CRI were repaired. The leaving of immigrants after 8 p.m. was organized, due to a party that was taking place in a new square built in front of the shelter.

Two immigrants in the CRI were found to be drunk, and were invited to remain outside the shelter.

In the later afternoon, a group of volunteers brought snacks (sandwiches and juice) for the sheltered. 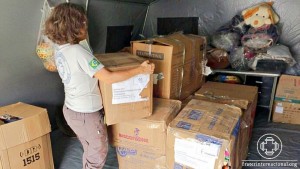 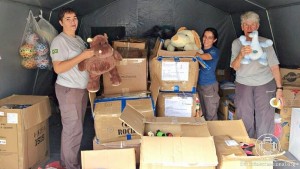 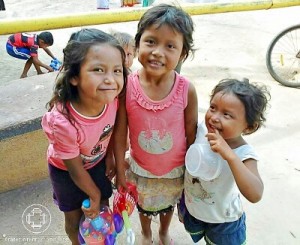