Music for the Healing and the Upliftment of Humanity

A great tree that represents the Plant Kingdom, created at the center of the scenario, was the propitious environment that welcomed all those present in the fifth edition of the new cycle of Music for the Healing and Upliftment of Humanity (MCEH). This program of Mercy Mary TV was broadcast live on Wednesday, May 23, 2018, from the Community-of-Light of Figueira, Minas Gerais, Brazil, with the intention of radiating peace to the whole planet and expanding the consciousness by means of music. 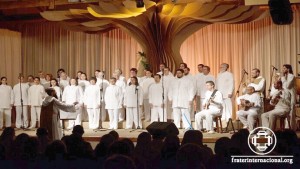 The Choir and the great tree

“Sacred Tree” was the theme of the edition of May, when a total of 75 people participated in this production. Among them were choralists and musicians of the choirs of the Communities-of-Light, related choirs and other guests, some who participated for the first time. In this new cycle of MHUH, which began last December, some novelties were developed to bring greater dynamism. Also a trilogy of videos of instruction based on the essence of various instructors, including Jose Trigueirinho, Mother María Shimani and others.

A very interesting strategy applied by the program is that the message be conveyed in a different way and be felt in a more intense manner by the public, by means of music. This is obtained by complementing the music with the images of the scenario and the story narrated from the reading of a book by the presenter, Henrique Moretzsohn. Henrique is an actor and singer of the City Theater of Sao Paulo (Teatro Municipal de São Paulo). 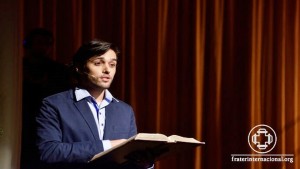 It is a very special gift to be able to be serving here with that which I so much love to do: art, music and all the more talking this month about the kingdoms and the trees. This message is very strong, it develops this appreciation and the consciousness about the mission of these beings, which is much greater than making photosynthesis and purifying the atmosphere; they bring spiritual consciousnesses and land them through their roots, transmuting the energy of the Earth. Through my work, I offer myself as an instrument of God to help and uplift the consciousness of people, and for an energy exchange to take place. For me, art, in all of its manifestations, has a very transforming power…”, said Henrique.

This month, the following repertoire was interpreted: 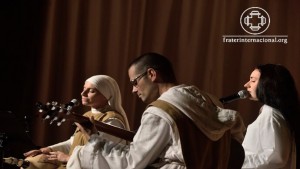 Jessica Casali, 24, from the state of Santa Catarina, singer of a duo called Café, was invited by Friar Paulo (from Grace Mercy Order, and director of the program) to participate in the MHUH, interpreting the song “Cura” (Healing), by Daniel Toco, in the trio with Sister Maria Jerusalém and Friar Sebastian.

“For me, it has been an immeasurable personal growth. I cannot describe it; on the first day, I came straight to the room of rehearsal and, right away I felt very different. I felt I climbed the steps of life just by being here”, said Jessica.

Friar Seferias de Tarcio, musician and conductor, from Grace Mercy Order, was invited to conduct the excerpt of the Opera Nabucco, by Verdi, known as “Va, Pensiero” (“Go, Thought”). “It is a work that has to do with the theme of the Tree of Life, because this song brings this majestic trait of the trees, which is the admirable characteristic of all classical waltz, to be strong and firm, as trees are and – at the same time – vertical, they rise and have this dense treetop. These great trees and this piece, from the musical point of view, can be associated to a great tree in its harmonic and melodic structure”, stated the friar.

“Concerning the consciousness of the Plant Kingdom, in this program we had the vision of recreating a tree, following the thread of the script and following the energy of Mother Nature, for a tree is a symbol of connection between Heavens and the Earth. A tree is like one of the greatest expressions of the Plant Kingdom, in height and size, its branches, its expression on the horizontal plane, its opening to its siblings. I feel there is a very broad field offered by art and this program gives us the opportunity of manifesting it. An image like this, of a more artistic scenography, which integrates lighting and music, offers a visual impact, which reaches many consciousnesses in different ways, completing the message of the kingdoms and making it possible for any kind of person to contact what we intend to convey”, shared Mara Fernandez. Mara is an Argentinian who lives in the Community-of-Light of Figueira, in Brazil, and who had the mission of conceptualization of the scenery, together with Friar Renato, of Grace Mercy Order, and other collaborators, who helped prepare the scenography.

“I felt it was very harmonious and I perceived a greater degree of professionalism in the production. I also perceived great human quality, an energy of empathy with the public. The message was very clear, and allowed one to deepen in the Plant Kingdom. It seemed impeccable”, reported Celina Albornoz, Argentinian and collaborator of the Community-of-Light of Figueira.

The program Music for the Healing and Upliftment of Humanity, as its name says, has this characteristic of, by means of music, of several presentations, generating an atmosphere in which the souls of the people who participate in the event gradually uplift and touch more subtle planes of existence, where they receive the spiritual help they need for their healing. It is something that helps us all uplift, with the help of music, with a vibration that gradually elevates us. And we receive the internal help as we open to appreciate the musical pieces.