Missionary Youth for Peace will participate in Regional Mission of Fraternidade 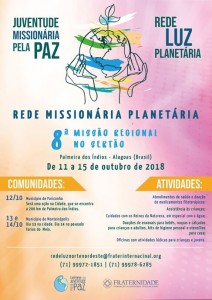 The Missionary Youth for peace prepares to take a new step, as an expression of humanitarian service of the Youth Campaign for Peace: beginning on the current month of October, voluntary youths from different countries will join groups of the Planetary Network-of-Light to carry forward the Regional Missions of Fraternidade – International Humanitarian Federation (FIHF).

The first experience will take place on the weekend from October 12 to 15, in the 8th Regional Mission of the Sertão of Brazil; the second one will be during the 8th Meeting of Service to the Original Peoples of Paraguay Mission, to be held from November 2 to 4, and then, there will be the 10th Meeting of Service of the Chaco Mission (Argentina), expected for November 17 to 19 of this year.

“For those of us who have been working for four years in the Regional Mission of the Sertão, it is a reason for great joy to have the presence of youths in a missionary activity. We hope this impulse will develop codes of love within them, to give continuity to this altruistic task”, highlighted Celina Santos, the coordinator of the Network-of-Light of the North/Northeast of Brazil. 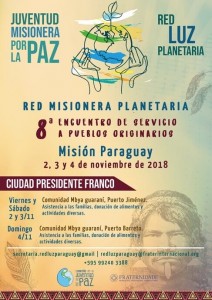 She explained that, in the case of the Regional Mission of Sertão, the approach of the youths began in the Youth Festival for Peace, an initiative of the Youth Campaign for Peace that is carried out every three months. On the occasion of the 5th Edition, which took place in January 2018, in Recife, Pernambuco, Brazil, a first group of youths gathered in the Northeast for the organization of the event. Then another group joined to work for the preparation of the 9th edition of the event, announced for January 2019 in Salvador, Bahia, Brazil. Between one festival and the other, the intention matured for them to also dedicate themselves to the missionary activity of humanitarian service.

For the Chaco Mission, the youth mobilization began during the Missionary Youth Events, which took place in Buenos Aires and Cordoba, in August and September 2018, according to Marcos Renaudo, who leads the organization of this movement. “The objective is to offer the youths the opportunity of a regional mission, with more intense characteristics oriented to a specific population, in this case, communities of the Indigenous Consciousness”, detailed the volunteer.

At the request of the Divine Messengers, in February 2016 was founded the Planetary Mission Network, with the objective of organizing the participation of the members of the Network-of-Light in actions of humanitarian help and to the Kingdoms of Nature, in the regions where they are, in their cities and countries. From this emerged the Regional Missions.

The Regional Missions are one of three forms of humanitarian action of Fraternidade – International Humanitarian Federation. All of them began with the participation of consecrated missionaries and continued with the collaboration of volunteers of the Planetary Network-of-Light. Together with the Regional Missions, there are the Permanent Missions and the Specific Missions. The first ones are developed in an uninterrupted way, whereas the others are convoked for short periods, to meet specific needs.

The Missionary Youth for Peace began its activities by means of Missionary Events. The first one took place in Belo Horizonte, Brazil, in May 2018. It was followed by others in the Brazilian cities of São Paulo and São Carlos; then in Uruguay; and the last ones took place in the Argentinian cities of Buenos Aires and Cordoba.

Mission of the Sertão of Brazil