The last day of 2015 and the arrival of 2016 were marked, in the Marian Center of Figueira, by the work of prayer of 3 thousand Hail Mary’s and the transmission of the Apparition of the Divine Mother. It is estimated that around 3 thousand people participated in the work of prayer, either in person or at a distance from several countries in the world. 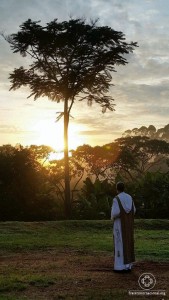 The work of prayer began early, when about 150 people arrived at the House of the Pilgrim on December 31, at 5 a.m. Three hours later, the group had already prayed 500 Hail Mary’s, bringing the necessary impulse to encourage other people to join. Members of the Monastery of the Grace Mercy Order, residents of the Community-of-Light of Figueira, collaborators and pilgrims took turns during the day in the Prayers to the Divine Mother. “We estimate that about three thousand people from different parts of the world prayed with us in some moment of the work”, affirms Mirnuk, Institutional Manager of Fraternidade – International Humanitarian Federation.

The work of prayer was only interrupted during the night of the 31st for the live transmission of the Apparition of the Virgin Mary, directly from the Community of Fraternity, in Paysandu, Uruguay. Then the prayers were resumed and continued until five-thirty a.m. of January 1, when the three thousand Hail Mary’s were completed. The work was conducted by monks and nuns of the Grace Mercy Order, affiliated to the Fraternidade. To Friar Supremo, a member of the Regent Council of the Order, the aim of this work is to invoke the energy of Peace and Harmony for the planet. “The group responded in a concentrated manner, with a lot of energy of unity and devotion, and the result was very good”, said the Friar.