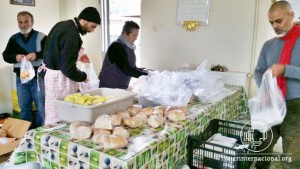 The Missionaries of the Greece Mission, conducted by the Fraternidade – International Humanitarian Federation, began the week visiting refugees of several countries of the Middle-East that are imprisoned in a detention center for illegal immigrants, near Athens. The volunteers accompanied a group of Missionaries of Charity of Mother Teresa of Calcutta, who execute this task weekly. 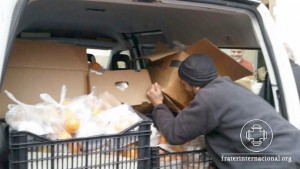 Preparing the vehicle for the visit

In the afternoon of this Monday, January 9, they visited 350 immigrants gathered in the camp Amigdaleza, in the city of Menidi, metropolitan area of Athens. They took kits of food and clothes. According to the rules of the prison, only food could be directed to each detainee, through the safety grid. The clothes remained at the entrance, stored in big bags, where they will be submitted to a rigorous inspection before being distributed by the guards.
Each individual package of food contained a packed lunch of rice with chicken two oranges, one lemon, bread and a piece of cake. The bags of clothes included coats, trousers, hats, scarves, gloves and socks. 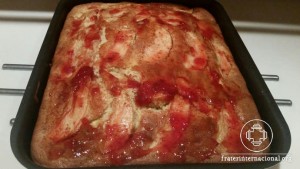 One of the cakes for the visit

At the moment of handing the food, the visitors had the opportunity of briefly talking with the detainees, sharing their difficulties and hopes. “These brothers were very happy with our presence, with our care and our concern in offering something warmer, more fraternal”, said Rosineide Freitas, a Brazilian missionary of the Fraternidade.

“They approach with a look, with joy in the eyes, as if they were children that are ready to receive a gift, a moment of light. Then we wondered: what is so important for them, to receive us in such a way?”, described Teresa, a Spanish missionary of the Fraternidade. 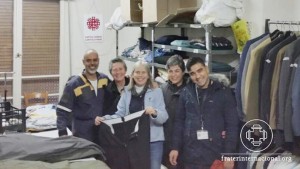 Preparing the donation of clothes

The preparations for the visit began on Wednesday, January 4, when the missionaries lodged in the permanente basis of the Fraternidade in Greece requested donations of clothes in Caritas Hellas, a place where they collaborate twice a week. The institution of social assistance accepted the request and the missionaries managed to pick several bags of coats for the detained refugees.

On that day, the officers of Caritas sealed the relationship of fraternity with the missionaries, giving them a symbolic gift: an image of a tree and a house, with phrases in Greek such as love, peace, happiness and health. 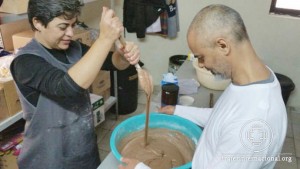 Preparing cakes for the refugees

On Friday, January 6, Twelfth Night on the Catholic calendar, the missionaries participated in a Mass at the headquarters of the Missionaries of Charity, where they regularly collaborate. Then when they were going to help fix lunch, as they do every Tuesday and Friday, they were surprised by a special request: the nuns asked them to prepare sweet cakes for the 350 detainees they would be visiting on Monday. The task extended during the whole weekend and resulted in six chocolate cakes, six orange cakes and one of apple for the guards of the camp.

The Monday visit to the prison ended with expressions of farewell such as “come back soon” and “pray for us”. 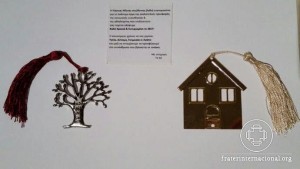 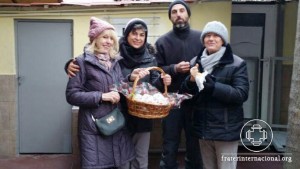 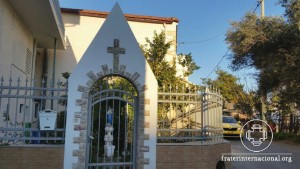 Chapel of the Missionaries of Charity