The missionaries of Egypt Mission maintain a basic daily rhythm, which begins with group prayer, breakfast and then they leave for the missionary tasks.

On June 19, the group made an Exchange: the male group went to the house of the Sisters of Charity in Mokattam, where they spent the whole day. The female group, on its turn, participated in the activities of humanitarian service in As Subra, throughout the day.

Mokattam, where the house of assistance is located, is a region of the city of Cairo whose population is mostly composed by Christians. Their main activity is as trash collectors, and they basically survive on recycling. About 15 km from the place is the Home for the Elderly, in the neighborhood of As Subra.

Home of service for the children 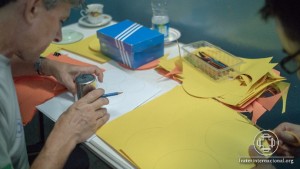 The male missionaries continued with the tasks begun on the previous day by the female group. In addition, they helped cut paper of different colors and sizes.

In the Home for the Elderly

The female group continued collaborating with the basic activities of the previous day. In the morning, one of the missionaries brought the guitar to the Home, and began a musical activity for the Elderly women.

After the daily routine that begins with breakfast, shower, personal hygiene, harmonization of the precincts, a space was opened to interact by means of chants and music.

Thus a moment of joy was obtained, derived both from the interaction among all and from the upliftment facilitated by music. It was a moment of party, in which they could dance, each one her own way.

In the afternoon, the female group returned to the Home of the sisters and as in the previous days they participated in the liturgy of prayer and adoration, continuing the basic tasks in the afternoon.

At the end of the day, the elderly women sang their songs, and the missionaries tried to accompany them by singing the best they could.

Once the tasks were finished, another day of the Mission was closed. A full day, which ended with gratitude and reverence during the prayer attunement.

June 20 kept the rhythm built during the whole Mission. A part of the group went to Mokattam, while the others stayed in As Shubra.

Donations and songs for the babies

When the missionaries of Fraternidade arrived at the home of the Sisters of Charity, in Mokattam, the Sisters asked for help unloading the newly-arrived donations.

Again music was present, as well as the guitar and the songs, this time for the babies. The idea of offering the work with music and chant was carried on because the missionaries perceived, during the previous visit, that the babies were rather nervous. Music manifested its harmony and facilitated a change in the atmosphere.

Some missionaries spent time in another wing interacting with the oldest children.

Painting of the beds

During the morning the other missionaries supported the home for the elderly once again. The Sisters of Charity asked the missionaries of Fraternidade to paint the protection rails of four iron beds of the feminine ward.

In the afternoon, in Mokattam, the group stayed cutting paper in different colors in geometric form. These pieces of paper would be used in a recreational activity to be conducted next week with all children of the neighborhood.

Conversation with the Father

The missionary returned to As Subra at 3 p.m., because Father Patricio, who lived in Brazil for 40 years, wanted to meet them. When they arrived at the place, the liturgy of the Sisters was beginning. The Missionaries of Fraternidade had the opportunity of participating in the Adoration and Prayer.

Then, while the coordinator of the Mission talked with Father Patricio, the other supported the distribution of meals to the elderly ladies.

The task of painting the rails of the beds continued and concluded.

One female missionary helped the Sisters of Charity in the infirmary, both in the feminine ward and the masculine one.

Accompany tomorrow the next report of Egypt Mission. Collaborate and share 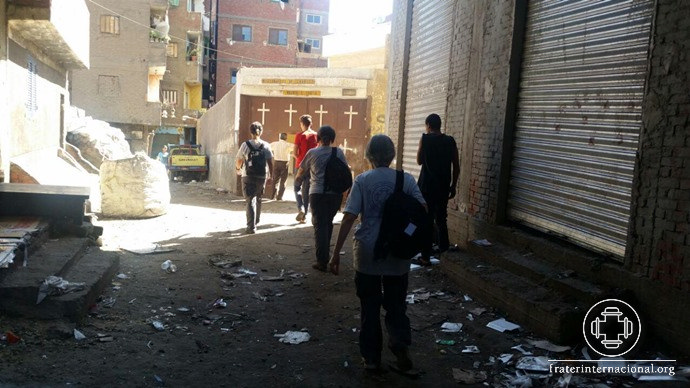