The missionaries conducted tasks in the House of Retreat where they are lodged, in the city of San Javier, in the region of Maule, Chile.

The cleaning of the vehicle used in their transfers, the organization of the working and personal material and washing of clothes were done.

Also were organized the medicines that will be donated to the animal shelters.

The missionaries participated in moments of retreat during the day.

Group meal took place at night with the presence of collaborators and members of the Network-of-Light.

“The work of help to the people who had or suffered damage due to the fire was very intense. When we told it was a mission of humanitarian help, destined to attend mainly those in need who were affected by the fire, the inhabitants showed tremendous emotion and gratitude”, said José Luiz, of the Network-of-Light of São Carlos. 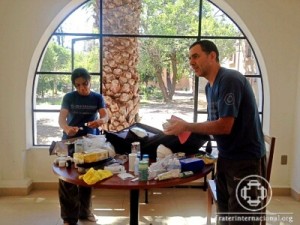