Translation: a Task That Transcends Borders

Thanks to the translation work, borders cease to exist and words integrate people.

To honor this very noble function, the UN has elected September 30 as the International Day of Translation. The choice of this date is a tribute to St. Jerome, declared to be the patron saint of translators. Deceased on September 30, 420, it was he who translated the Bible from ancient Greek and Hebrew into Latin, thus expanding its accessibility.

At the Fraternity – Humanitarian International Federation (FHIF) and its affiliates, and also at Misericordia María TV,  volunteer translators work on countless fronts, enabling information to reach an ever-increasing number of a diversity of people around the world in a continuous endeavor to build cultural, philosophical, humanitarian and spiritual bridges among them. 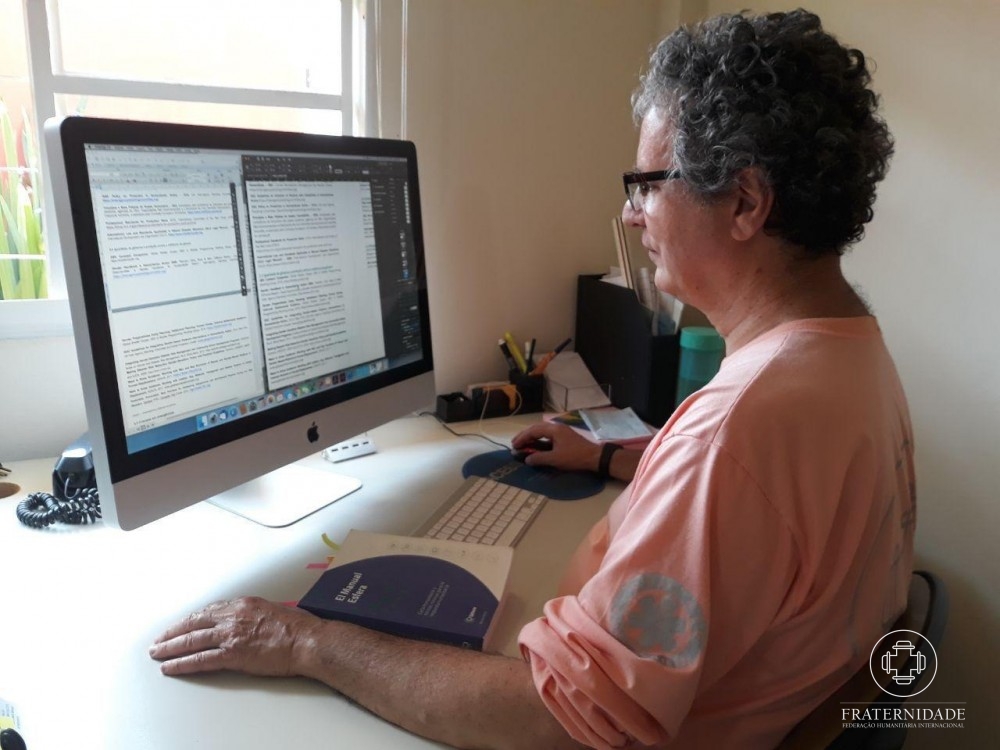 Mauro: “translation brings peoples closer to one another”

The volunteer translators that serve at the Fraternity – International Humanitarian Federation (FIHF) and at  Irdin Editora – its affliliate – contribute significantly to the expansion of borders. As well expressed by Mauro Rotenberg who works at both ends as a translator and a reviser, “translation brings peoples closer to one another. This is getting more essential by the day, since it enhances cultural, scientific and literary sharing among people.”

The translation work done at the Fraternity–International Humanitarian Federation (FIHF)  involves all the production for its website, videos and other projects. This year, for instance, translators and revisers carried on very important projects in partnership with Irdin Editora. Among them we can highlight the Sphere Handbook translation from English into Portuguese, and the translation from Portuguese into both Spanish and English of the book  Fraternity – International Humanitarian Missions, written by Ana Regina Nogueira.

Having actively helped in the accomplishment of these two tasks, Mauro considers that “the book Fraternity – Missions awakens us to the long-awaited realization of a world of peace. Also, its versions in Spanish and English cause to echo in far-away places this human call to  build a more fraternal world.”

With regard to the Sphere Handbook, its translation into Portuguese makes it possible for countless humanitarian agencies and official agencies working with emergencies in Brazil and other Portuguese-speaking countries to greatly expand their capacity for action – something extremely necessary in the current world scenario.

Undoubtedly, translation facilitates the coming together of people from different parts of the world, breaking down barriers between languages, making understanding easier, uniting them.

In the Association of Mary, for example, Sister Gemma – a monastic  of the Grace Mercy Order – coordinates the editorial sector in which about forty-five volunteers participate, among translators and proofreaders. They work with the messages and books of the Sacred Hearts in Portuguese, Spanish, English, German, French, Italian, Korean and Mandarin. For her, “the support of volunteer translators is essential for the translation, proofreading and publishing   the Words of the Divine Messengers – Christ Jesus, the Virgin Mary and Saint Joseph – in all these different languages.”

Sister Gemma explains that, regarding these messages, the translator’s activity goes far beyond the technical mastery of the language, since “it is a very special task in which the fidelity to the original message is a fundamental point – it must be translated exactly as  as it was received by the visionaries of the Grace Mercy Order.

When the message is divine and comes from higher sources of existence, the important task of the translator reaches another plateau. As Sister Gemma emphasizes: “The Divine Word, the Word of God, has an incalculable power, which heals, reconciles, supports, transforms and redeems the human heart. Therefore, our aspiration is to be able to take these Words to the whole world, so that all human beings have the opportunity to listen to the Divine Messengers, thus living personally the experience of feeling loved and deeply supported by God.”

For this purpose, the translators are ready to capture and convert words with sensitivity, interpreting, considering, understanding, reproducing, mirroring, clarifying each word with empathy, dedication and commitment.

To all professionals and practitioners of this art, our grateful tribute for everything that translation represents and provides.