The Tibetan Park Live School published the first edition of its newspaper, “Straight Chat News”, put together by students. 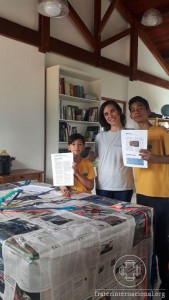 The student voice of the Light-Community of Figueira will now also make itself felt through its first newspaper, put together by elementary school students of Tibetan Park School (EPT) of that community, which is located in the rural town of Carmo da Cachoeira, in the state of Minas Gerais, Brazil. It became evident when on the past Saturday, April 13, the EPT, at the same headquarters, published the first edition of the newspaper entitled “Straight Chat News.”

“The idea that the students would publish a newspaper emerged during the Portuguese language class (text production) to stimulate the practice of written expression, creativity, and assimilation of the formal contents, which they needed to acquire, within the literary and journalistic field. During that first two-month period, the texts were presented in the classroom. Occasions in which it was also possible to work on the oratory.” It is Esther (Juliana Pacifico), teacher in charge of the Portuguese classes, who comments.

A Newspaper that speaks clearly 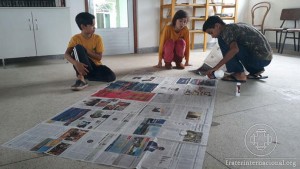 Caio Pacifico, 9th grade, Aurora Mager, 7th grade, and Matheus Borges, 6th grade, are the elementary school students that are beginning this project, and that in this first edition had the responsibility of creating the content. Among the three, they decided on the name of the newspaper: “Straight Chat News”, with the group certainty that it will always be “A newspaper that speaks clearly.”

With their young age, but with the clarity and the commitment that deserved the situation, the three students, supported by their teacher, Esther, presented the newspaper to their classmates, teachers, family and friends, the day they called the “Special Launch”. 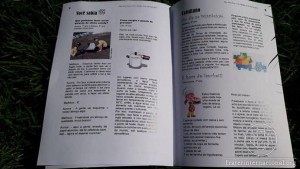 The content presented in this first edition shows very attractive notes, pleasing and easy to digest, with that spontaneity and clarity with which they were written, and in the same way, the newspaper was orally presented, capturing the attention of the audience, both children and adults, on the day of the launch.

Its content has sections such as: Culture and art, portraying with humor, doing our part, our world, luncheon hour, did you know that…? It will be possible to find in them interesting articles developed under various titles, for example: “We and the Plastic”, “Mother Nature, we only have one”, “Economize on Water.”

In these, according to their teacher’s words, the students “strived” to write properly and to share through their notes and articles, their impressions about daily experiences; managing to put together some current sections that are well worth checking out, which from now on will appear every two months in the newspaper “Straight Chat News”.