With the intention of getting to know better the gaps in the humanitarian response and the real situation of the Venezuelan immigrants in Colombia, the Bethany Global Servicesagency organized some research in the cities of Bogota, Tunja, and Duitama, and invited the Fraternidade – International Humanitarian Missions (FIHM) to participate.

The research was done on January 22 and 23, and 34 people were interviewed, including Colombians, Venezuelans, and employees of organizations that offer services to the immigrants.

The lack of work is the greatest difficulty the interviewed Venezuelans have to face. They also report that they were unaware of the greater part of the assistance offered by the international agencies to the immigrants, and said that, in general, they feel welcomed by the Colombians, although some affirm having experienced prejudice and discrimination. Missionaries of the Fraternidade-Missions (FIHM) and the team of the Bethany agency did interviews in various places of the Colombian capital, Bogota. In a lodging place close to the center of the city, they heard stories from the immigrants about the hard conditions they are living in; in spite of paying rent, each family lives in a small room with a bathroom, without ventilation and poor lighting in the hallways.

Among those interviewed, some Colombians could understand the difficulties the immigrants were experiencing; others showed quite a bit of resistance and strong negative feelings in relation to the Venezuelans because of episodes of robbery and crime in general in the central region of Bogota.

When asked how the immigrants deal with the stress generated by the situation in which they live, some said that they have the support of their families, but the majority reported that they simply “take a deep breath and continue on.”

The research also points to some children being able to attend school, who appear to be happy with this activity. According to the stories of the mothers, “this brought greater tranquility to the families.” 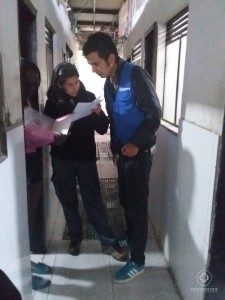 The research done by the Bethany Global Services and the Fraternidade – International Humanitarian Missions (FIHM) included two cities in the interior of Colombia, Tunja and Duitama. In these cities, the research had the objective of identifying and initiating programs or interventions for the protection and assistance of the migrant and displaced children and adolescents, in transit or with an intention to stay.

The research showed that there are openings for children in the Tunja schools, but the municipality does not have a support center for the immigrants.

A family of walkers with three children, four women and four men, was identified. They were hungry, cold, and tired. Two children showed symptoms of illness and nausea. They couldn’t find shelter in Tunja to rest during the night, to eat, or for personal hygiene.

According to a Colombian person that offers help to the walkers, who did not want to be identified, there are outbreaks of racism in the region, and she herself was threatened because of helping the immigrants. She emphasizes that support routes throughout the area and food in the shelters are all lacking, and points out that there are stories of recruitment and kidnapping in one of the cities of Boyacá.

In the municipality of Duitama, a family group of 15 people were visited. According to the research teams, “it is a very united group, several of which are musicians, working and struggling to better their lives.”

“Participating in this research, talking with the people, and seeing the real needs of the immigrants is fundamental for being able to offer a more effective response to this situation,” says a missionary of the Fraternidade-Missions (FIHM), Priscila Vasques.