Quarterly Meeting in the Nucleus-of-Light of Belo Horizonte

“To learn the language of the stars”

(Transcendence 4 attribute, of the Group of Attributes of the Monasteries of the Community-of-Light of Figueira) 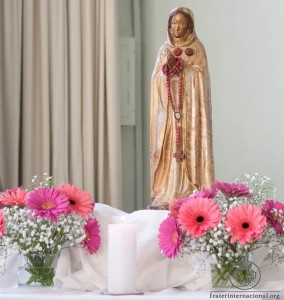 Our Lady of the Mystical Rose

“If anyone asked us, ‘What is Fraternidade – International Humanitarian Federation?’, would we know how to answer?”. This was the initial question of the sharing made by Friar Luciano, of Grace Mercy Order, during the quarterly meeting of the Nucleus-of-Light of Belo Horizonte.

The meeting took place on June 16, 2018, in Belo Horizonte, Minas Gerais, Brazil. Decorating the hall where the event was held, the pictures of the Divine Messengers could be seen, as well as the statue of Our Lady of the Mystical Rose, always present in these meetings, besides a little painting of the Face of the Virgin known as Our Lady of the Latin Countries and of the Andes. The painting had been sent by the philosopher José Trigueirinho Netto, for the spiritual protection of the Nucleus.

Fábio Nobre, a member of the Youth for Peace, reflected about the initial question of the sharing: “We are involved with the group, we participate in the activities, in short, we are part of Fraternidade, but we do not know how to talk about this”.

Besides the sharing, the Choir of the Nucleus had sung the canticles: “Ave maria”, by Jean-Baptiste Faure; “Our Father”,

by Albert Hay Malotte, and the following attributes of the Monastery of Figueira: “Penetrate with courage the mystery of the route” and “Learn the language of the stars”. At the moment of the singing of the Attributes, the public sang along with the choralists. 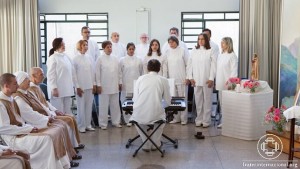 Choir of the Nucleus-of-Light of Sacred Sky

On the occasion, the general coordination made two practical requests: one to finish the acquisition of the truck (a fundamental vehicle for various tasks) and another for support for the project for the reuse of rain waters in the buildings of the Nucleus.

The meeting had the participation of more than one hundred collaborators. It kept the topic of last meeting, held in March 2018: “Times of Transcendence”. The sharing of Friar Luciano touched on several aspects of Fraternidade, especially about the Humanitarian Missions and the Portal.

About the missions, the collaboration of Fraternidade with other institutions, such as the UNHCR (United Nations High Commissioner for Refugees) and with representatives of the public life of the country. The lecturer reported several missionary experiences, especially in Roraima. Besides, he highlighted the values and the conduct of the missionaries of Fraternidade before the countless situations of a mission: action based on impersonality, absence of expectations concerning results, constant availability and emphasis on the potentiality of the human being to overcome obstacles. 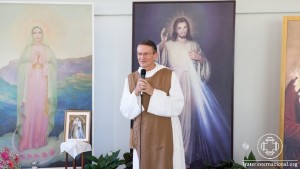 “The information about the Humanitarian Mission in Roraima were very clarifying and important”, commented Maria Elisa, a participant in the Network-of-Light.

“Listening to the stories and experiences of the Roraima Mission can touch our hearts to help in some way. Whether by means of prayer, of missionary action or of material contribution”, expressed the young Fábio.

About the Portal, Friar Luciano highlighted that the diffusion should focus on the process of the experiences, and not only on their results. In other words, the perspective of the content of the Portal should be the transformation of the consciousness of beings in its ethical, internal and spiritual aspects. He used the metaphor of an athlete: one thing is to show the development by means of exercise and of behavior, with the will, attention, vigilance, effort, dedication, persistence and other being necessary virtues for the perfecting of the athlete; another very different thing is just to show the muscles and the medals derived from the activity. In synthesis, what is important is not publicity in itself, but sharing the experience of the awakening of the consciousness. 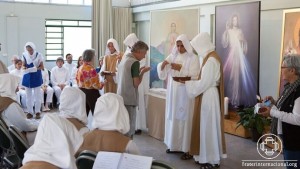 Renata Falci, a representative of the general coordination of the Nucleus, said that “Transcendence has been the keynote of each quarterly meeting. We need to go beyond limits and reach into a new perception, whether in the spiritual or in the practical realm. In this new stage, we are being summoned for the action of charity and for service”.

At the end of the meeting, the sacrament of communion was offered to all those present.