Pilgrims have lived their devotion in the Marian Center of Figueira 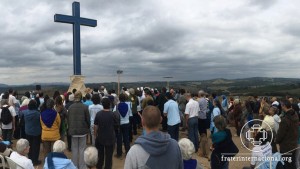 Pilgrims from various states of Brazil have gathered in the Marian Center of Figueira, in the south of the state of Minas Gerais, specifically in the rural área of the city of Carmo da Cachoeira. The activity was conducted on August 24 to 26, 2018. Fulfilling a planning organized by the Marian Center, which led them through different stages, the pilgrims could thus satisfactorily live their spirituality.

“People come here and it is so many graces that are received that it is impossible to put in words. We arrive and receive so much! We only receive, receive and receive from the Mother Mary, Rose of Peace, and from everyone from here. I believe all of us also learn to give of ourselves with our comings. God willing, I will continue to come my whole life with a lot of faith, love, and infinite gratitude”. Thus expressed Renata Pinheiro, who came from Belo Horizonte, Minas Gerais. 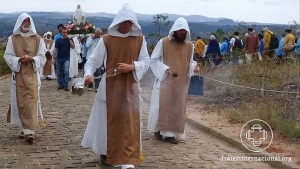 The Schedule indicated the participation of the pilgrims in different points of the Marian Center. Thus, on Friday, 24, the schedule began about 6:30 p.m., with the Vigil of Prayer for Peace in the Nations, closing the rhythm of the day with an ecumenical communion. On Saturday, 25, beginning at 8 a.m., the Reliquary of the Most Chaste Heart of Saint Joseph was already exposed, opening the prayer and the corresponding communion. The day turned out to be of much movement for the pilgrims, among the tasks of the Marian Center, the support to the pending constructions (which, in an immediate future, will allow the reception of a considerable number of pilgrims), and the vigils. At noon, the group prayer the Mystery of the Rosary. And then, at the end of the day, the pilgrims participated in the procession of candles and, after that, the activity that closed the day, called “Praying with the Virgin Mary”.

When the Sunday, 26, the final day of the meeting, came, the pilgrims, at 7 a.m., concentrated on top of the Hill of Apparitions, in the tent that would receive them to pray together the one thousand Hail Marys.

During the Day, everyone could visit the Hermitage of the Glorified Christ, the Immaculate House of Peace, the Square of the Belfry, the Fountain of Saint Joseph and the Blue Cross.

One thousand Hail Marys in unison 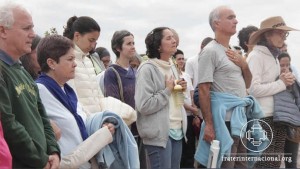 The one thousand Hail Marys were the top point of the pilgrimage. With spontaneous and enthusiastic devotion, the pilgrims, in group, managed, in a single voice, a single heart, evoke the holy name of Mary. “Since the beginning, I have been accompanying the pilgrimages, I come whenever is possible, I do not lose the one thousand Hail Marys, because each rosary prayed is a battle won. I feel it is a significant impulse for me, for my life and for all brothers and sisters around us, just as for my Rio de Janeiro and for the whole planet. This impulse makes me carry on in my life, makes me come and becomes increasingly strong, making me always return”, commented Marly Silva dos Santos, from Rio de Janeiro, RJ. 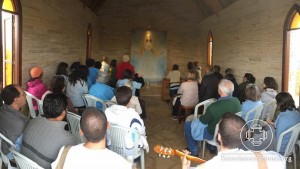 With joy, among songs and a deep feeling, the pilgrims went from the fervor of an ardent prayer to the continuity of their passage in this cycle on a simple and short path guided by the monastics of Grace Mercy Order, who led them to the top of the Hill of Apparitions, where the Blue Cross shone, as a symbol of the visible presence of God. Once before the Blue Cross, and keeping the energy built in the previous spiritual exercise, the monastics began the liturgy that would mark the entrance to the ecumenical communion, thus sealing a spiritual work of a weekend full of accomplishments, from an orderly and allegorical external path, which facilitated the possibility for each one to make an inner travel and live a unique experience

Lucas Souza Sales, from Belo Horizonte, Minas Gerais, wanted to share his feeling: “For several years I have come with my family. Now we also bring our six-year old son. We came here because, to us, it is a blessing to be here and to participate in these pilgrimates. We like everything we do here, which leads us to reflect internally and, thus, we can carry on in the external world, in our normal life, besides being recharged with energy”. Lucas considers a pity that many people are losing this mercy: “I recommend to all of them to know about these activities, to come, to not lose them, because it is a pity if they do not know this place, the work, and do not receive Mercy. To be here and pray is a surrender for each one and for humanity”, he added. 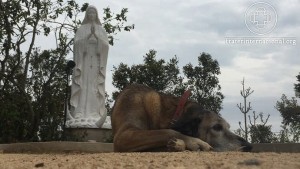 The activity is part of the monthly rhythm that the Marian Center is placing on the pilgrimages.

Would you like to participate in these pilgrimages?
Communicate with the Marian Center of Figueira, Minas Gerais, Brazil.