With the objective of contributing for the sustainability of the planet and to offer less costlier alternatives, the group of the Network-of-Light of Curitiba, in the State of Paraná, Brazil, has conducted a workshop for the elaboration of ecological diapers and absorbents. 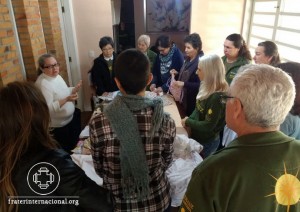 The activity took place on July 7, 2018 (Saturday) and had the  participation of 18 people, among members of the Network-of-Light groups of Curitiba, Joinville, Balneário Camboriú, São Bento do Sul and Rio de Janeiro, as well as representatives of the Community-of-Light of the New Earth and of the Indigenous village Teoká Tarumã, located in Araquari, in the Brazilian state of Santa Catarina.

The idea consisted in forming multiplying agentes for the making of reusable diapers and feminine absorbent products, to donate them to the poor families of the towns and Indigenous villages, as well as to send them to the refuges of Indigenous and non-Indigenous Venezuelans, located in the cities of Boa Vista and Pacaraima, state of Roraima, Brazil.

“The meeting took place in an atmosphere of a lot of union and fraternity, and everyone participated actively, and were very enthusiastic for the continuity of the meeting, so that other people might also learn to make these pieces of great usefulness”, highlighter Lila Hossaka, the coordinator of the of the Network-of-Light group of Curitiba. 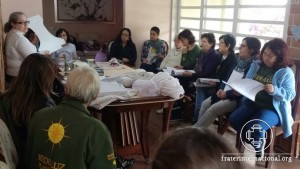 The instructress of the workshop, Denise de Oliveira Nobre Aguiar, a member of the Network-of-Light of Curitiba, prepared an illustrated booklet with photographs, with a detailed description of the steps to follow in the making of the reusable diapers and absorbents. This printed material will be soon available, for free, for all those interested in the making of those products, with the aim of donation.

Denise is a retired teacher, specialized in environmental education and in artisanship. Motivated by the difficulties that the Venezuelan refugees in Roraima undergo, she decided to learn to make the diapers and the ecological absorbents, to send them in donation. Then, she had the idea of propelling the workshops for the dissemination of the technique. Participants of the ecological workshop

“It is a very invaluable initiative for the current times, taking into account the environmental impact of the accumulation of plastic residues”, considered Luiz Alberto Carvalho Siqueira, the coordinator of the Network-of-Light of Joinville. He explained that, for the group of Joinville, the topic becomes even more relevant due to their frequent rendering of service in the Indigenous villages of the Southern region of Brazil.

The Network-of-Light of Curitiba aims at the continuity of the activity, conducting bi-weekly meetings, so that more people can learn and also teach the technique, thus building a chain of good.

Those interested in obtaining further information can write to: