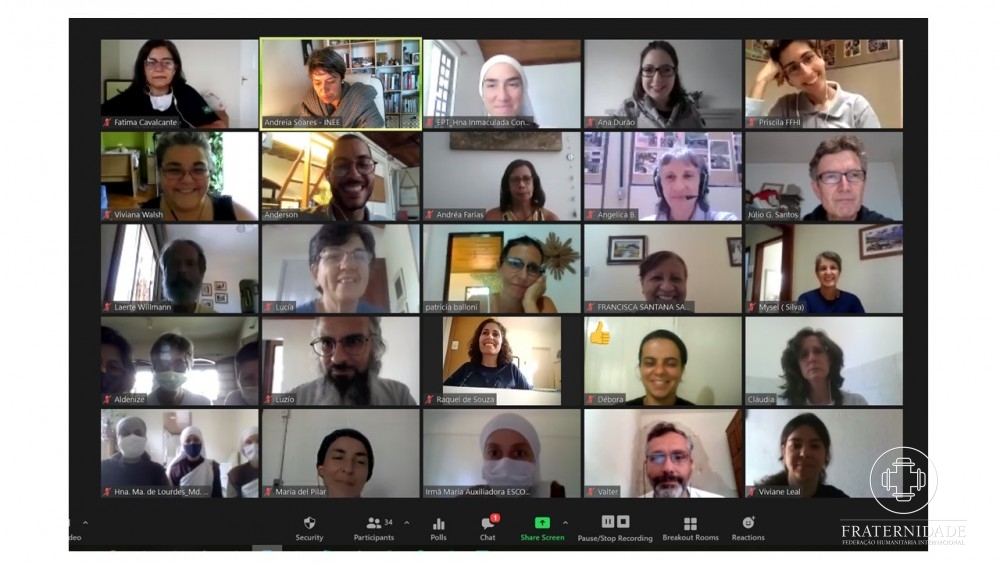 According to Priscila Vasques, coordinator of the Training and Development Sector (T&D) of the Humanitarian Fraternity (FFHI), – “the purpose of the course was to  train the whole group of volunteer missionaries of the Education in Emergency Axis of the Roraima and Manaus Mission, and of the Light-Communities of Figueira and the New Earth, within the standards of the INEE, which is the organization that developed the Minimum Standards for Education: Preparedness, Response, Recovery, a manual that orients the work in this field.”

There were 34 participants, among which were seven facilitators, two being members of the Portuguese Language Community of the INEE, Andreia Soares and Julio G. Santos, and five being volunteer missionaries of the Humanitarian Fraternity (FFHI), Priscila Vasques, Anderson Santiago, Angélica Baglivo, Fátima Cavalcante and Raquel de Souza.

For the trainer Andreia, – “It was with great satisfaction and joy that the INEE welcomed the initiative of the Humanitarian Fraternity (FFHI) for providing their teams of the Education Axis with a specialized training on the framework for the Minimum Requirements for Education.”

The fact that it took place on an online platform did not get in the way of everyone diligently dedicating their efforts, and according to what the volunteer missionary and facilitator, Fátima, explains: “the group learned to reflect, discern, analyze and build a common language, verifying how education can help to protect, to heal or mitigate the trauma, reducing the impact on the affected population, especially children and adolescents, who are usually at greater risk and are vulnerable .”

Fátima also considers that “this training had a before and after, because the group was able to share impressions, expand their vision, grow and mature as a group, incorporate ideas and practices that emerged from consolidated experiences in different parts of the world.”

Raquel, another volunteer missionary acting as a trainer and facilitator, showed the same enthusiasm. She considers this course came to perfect the already existing content: “I see that Training as a valuable tool for perfecting our practice in the missions and in humanitarian service, complementing the training of the Sphere (Handbook) Standards, and mainly, to improve the quality of the education in situations of emergency. Through the Minimum Requirements for Education, we will be able to work from a foundation, quality, honesty and trust.”

Enthusiasm, joy, commitment, interest, discipline and organization are some of the words that defined the work that took place in those three days of intense contact between the participants.

“The course offered the opportunity of our acquiring (an) important knowledge to put into practice. I understand that we received a tool that will serve as an addition to all the work. We had a very intense experience, with very positive and growth-creating incentives.” This was said by the volunteer missionary Angélica, who also participated as a trainer and facilitator.

Focal Point of the INEE in Brazil

Positive and growth incentives are really on the agenda for the continuation of this work, and are a cause for celebration, once the Humanitarian Fraternity (FFHI) was selected as one of the Focal Points of the INEE, through the volunteer missionary Anderson, in a pilot project that will be developed throughout the first semester of 2021.

“Still in January, the candidacy of the Humanitarian Fraternity (FFHI) as the INEE Brazil Focal Point was accepted. In all, there will be 12 INEE Focal Points around the world, representing Portuguese, English, French, Spanish and Arab language communities. So the Training in the Minimum Requirements in Education begins a journey that will take place in the coming months, seeking to expand the knowledge of Education in Emergencies in Brazil, articulating humanitarian players and perspectives of action in the Humanitarian situations currently being experienced,” explains Anderson.

These are reasons for celebration for all the participants in this work, whose enthusiasm shown during the course is justified by the fact that there is, among them all, a common denominator: the desire for the good to win, the good for everyone. And this is present in the words of Andreia: “My feeling is that the three days of training allowed not only the development of technical skills, but also a personal development towards a common ideal: access to a relevant quality education under safe conditions for all the people, children, young people and adults.”

In this context it is worth remembering that the founder of the Humanitarian Fraternity (FFHI), José Trigueirinho Netto (1931-2018), always said that “everything has yet to be done” and untiringly repeated: “Grace is infinite, Love is invincible.” In light of those affirmations, the volunteer missionaries continue onward, knowing that both are real, true, and that yes, the common good is possible.