New collaborators in training with the Missionaries of Fraternidade.

After Roraima, Bogota, and Cúcuta, in Colombia, missionaries of Fraternidade – International Humanitarian Federation (FIHF) are now taking on a fourth humanitarian frontline work with Venezuelan refugees in Manaus. With this initiative, the FIHF expands its involvement in Operation Welcome, a humanitarian response made up of the Brazilian Government, the UN, and entities of the civil society.

Better conditions for helping the refugees, that continue arriving daily in Brazil by the hundreds, caused Operation Welcome to expand the work beyond Roraima. The largest city in the north of the country, Manaus, already shelters around 3,000 Venezuelans, equivalent to 1.7% of the local population of 2.15 million, according to the Brazilian army. The structuring and adaptation of the mission in the Amazonian capital is already being done and must be completed by mid-October.

The FIHF, a non-governmental organization (NGO), created and headquartered in the town of Carmo da Cachoeira (MG), has been carrying out humanitarian missions since 1987 in Brazil and in various parts of the world. Volunteers of the institution have already been present at real catastrophes; social, natural, and environmental and with refugees in conflict and persecutions of an ethnic nature, in Brazil and in countries such as Uruguay, Chile, Ethiopia, Rwanda, Nepal, Turkey, Egypt, and Argentina.

The process of internalization consists of the definitive reception of the refugees, an initiative of the Brazilian government that has the support of the United Nations Organization (UN), and the participation of the FIHF. Given the limited conditions for services in Roraima, this process was already occurring organically in Manaus, with many refugees who, on their own initiative, moved in search of a final destination. That movement brought about the need for a new front line for Operation Welcome “Around mid-August of this year, the army and the Federal Committee officially confirmed that, besides Roraima, Manaus would become part of Operation Welcome,” says José Egas, representative of the United Nation’s High Commission for Refugees (UNHCR) in Brazil. He explains that the large number of people, indigenous and non-indigenous, living in precarious conditions, caught the attention of the Brazilian government and the UN.

“So the Brazilian government decided to expand the process of internalization and signed a number of contracts with airlines, securing empty seats on flights so that the refugees could continue to travel to cities that can take them in. It is a joint and linked action between the civil society, governmental bodies, and businessmen in all of Brazil”, according to Egas.

In Manaus there is lodging being organized for refugees considered ‘in transit’ to be a foundation for Venezuelans in the final stage of internalization. The activities of the FIHF include joint mediation with the state and municipal governments looking for solutions for the most urgent local humanitarian needs.

According to Friar Luciano, the general manager of the FIHF, the purpose of the coming of the NGO to Manaus is to carry out and organize the so-called ‘internalization‘ phase, which works together with the Venezuelans in transit who have already gone through stages of document regularization, received vaccines, and in some cases, training. “One of the projects of the FIHF is to create conditions for the refugees to learn Portuguese before travelling on to other states of Brazil,” he explains.

The work of the FIHF in the lodgings of Manaus is no different than what has been done since 2016 in five of the 12 shelters in Roraima. “Organizing the environments that have been designated to accommodate refugees, providing safety, hygiene, and the minimum of human comfort begins with an inner training of the staff,” explains Clara, missionary and field coordinator of FIHF. “It’s necessary to train the new team, made up of 11 people, so that all may learn to act appropriately in the complex context that they are going to face. The training has a theory part, the why of this situation, where these people come from, and afterwards, practical guidelines, such as filling out forms, filing documents, and especially, what the proper posture is that a contractor or volunteer must present toward people who come from a saga that has subjected them to a forced displacement and much suffering,” explains the coordinator.

The role of the missionaries is intended to assist in the restructuring and recovery of a dignified life. With the global migratory crises in full expansion, the know-how accumulated by FIHF, built through practice, is already recognized and requested by multinational organizations such as the UNHCR itself. 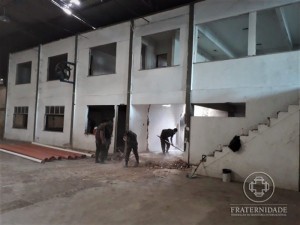 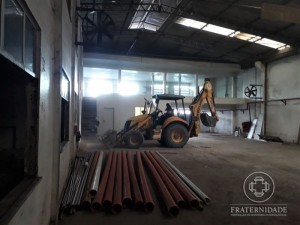 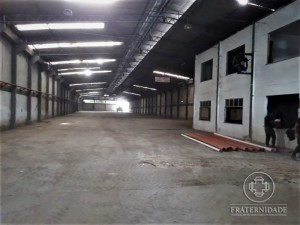 Construction in the area of the new lodging

The Armed Forces have successfully acted in the administration of the humanitarian crisis that involves the Venezuelans in the north of the country. According to Lieutenant Colonel Castro Freitas, spokesperson for Operation Welcome, the arrival of the mission to Manaus also has the purpose of organizing urban spaces to benefit the refugees and local inhabitants.

“Until just over a month ago, there were refugees living in the streets around the Manaus bus station, since most arrive by bus to the city. Today, the hostel prepared to receive them is fully organized, with an area for overnighting, an area of bathrooms, laundry room, and an area for eating,” explains the Colonel. 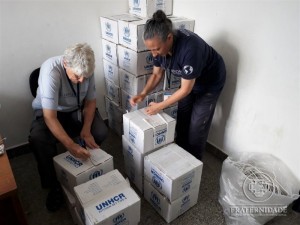 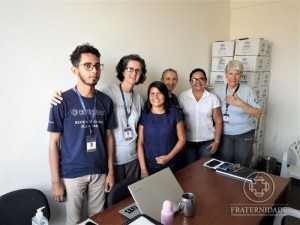 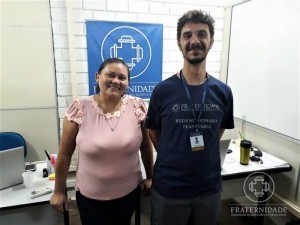 Since 2013, when an unprecedented socio-political crisis arose in Venezuela, more than 10% of the population of this country, something around 4 million people, immigrated to other countries of Latin America, among them Brazil and Colombia. The Brazilian state of Roraima, that is on the frontier with Venezuela, has already received more than 120 thousand refugees, meaning that today 20% of the population in Roraima is made up of Venezuelans. The street population of the city of Boa Vista is already more than 3.5 thousand people, according to the Brazilian Institute of Geography and Statistics (IBGE).