Humanitarian Roraima Mission in Pacaraima – Rescue of the Warao cuisine

February 5 to 8, Monday to Thursday

In the morning there was a logistic preparation for the distribution of foods. Due to the great number of people, the amounts were reduced, in order to assist everyone.

The sanitation conditions improved reasonably, with the cleaning of the cesspools. On the other hand, lodging for those who have recently arrived are precarious. There is no room to hang hammocks nor enough mattresses and blankets. Many sleep on the floor or on cardboard. A donation of mattresses is being awaited.

The work with artisanship and sewing continues with success, with the participation of several women. One of the main objectives of the activities is to preserve the creative potential of the Indigenous immigrants.

Many are the health cases due to the current conditions and to the previous history of each individual. Some require that they be taken to hospital, and others are attended with the available resources, and also with the guidelines received from the doctor from the health center.

The growing number of people arriving makes the situation of the Venezuelan immigration even more delicate. The capacity of the House of Passing is exhausted, which causes conditions of the place to be even more difficult. Many newly arrived are relatives of the immigrants who already stay in the shelter.

Health cases have been increasing, and many are the cases of night fever, flu, cold and headaches. Several people have been taken to the health center and to hospital. As the city health network also faces difficulties, there is a shortage of medicines, even though the people are assisted.

Activities of environmental education have occurred in practice, that is, in the maintenance of the cleaning of the áreas and in the implementation of the selective collection of trash.

After a long period, a donation of clothes was received. A work of selection will be made, and the distribution will take place next week.

In the morning, there was the distribution of foods, following the rhythm and the methodology already applied. This means with the presence of the Aidamos (Indigenous leaders) and with the distribution of the items being done inside the food storage. This is the most harmonious way.

Members of the United Nations High Commissioner for Refugees (UNHCR) were present and, in the afternoon, gathered with the missionaries to comment and to present suggestions about the work. It was observed that the amount of food is insufficient for the number of people, and that, when fragmenting the portions, the measures should be exact.

It was commented that the communitarian kitchen that is being built must be conceived to value the current process of culinary preparation. Each family receives its food. The manner of preparation being used is more coherent with the proposal of rescue of the Warao culture, as it implies: gathering wood, lighting the fire, preparing the food as customary, to sit around the fire with the whole family, in short, to create a moment of integration of that family nucleus.

On this day a Warao man was imprisoned and members of the Roraima Labor and Social Welfare Secretary (Setrabes) went to the police station to check what had happened. After the clarifications made, the immigrant was released in the late afternoon. 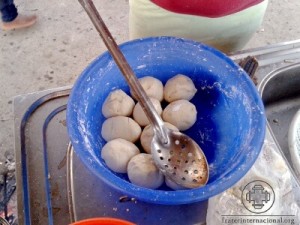 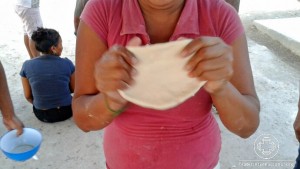 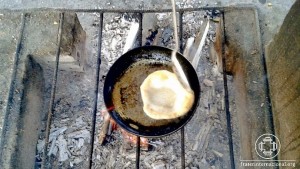