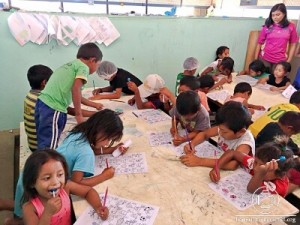 The blue container of the Center of Reference for the Immigrant (CRI) was organized and cleaned.

A drunk immigrant, who was also under the effect of drugs, was expelled of the shelter.

Arrival of new families of Indigenous immigrants from Venezuela.

Volunteers conducted activities with the 7 years old chindren in the school of the CRI. Names of animals in Warao and Portuguese were taught, as well as the alphabet, and drawings of animals were painted. With the younger children, the work was outside the CRI, and then they joined the older ones in playful activities. There was also origami activities, free painting and guitar classes with a monastic of the Grace Mercy Order. 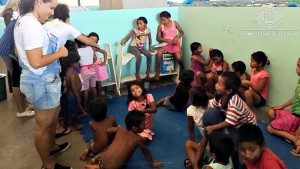 “We talked with some collaborators and persons responsible for the activities, about the importance of a more concentrated work with the children, for they enter and leave the classroom at every moment, mess with the closets, climb the desks, even the older children. We need to do a more rigid and attentive work, so that these children do not suffer so much in the future, in case they do not once again have the simple and free life they have in the Indigenous villages”, explained Alexandrina, a missionary of Fraternidade – International Humanitarian Federation.

The making of bags in the sewing class continued. 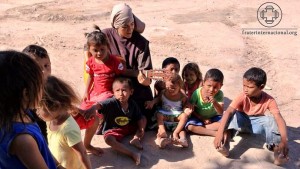 Missionaries of Fraternidade detected that the gate to the vegetable garden had been forcefully opened, and had dogs and children playing in the place.

Meeting with a missionary of Fraternidade, a member of the Roraima Labor and Social Welfare Secretary (Setrabes), and Indigenous leaders about the issue of the behavior of the children during classes.

“We benefitted from the idea of the group from the Casas de los Niños (the school of the CRI) of creating the badges with names and photos of the children. The badges will help identify them better, and also organize the division by age and shifts of classes, contributing for a better productivity and growth of the children”, said Alexandrina. 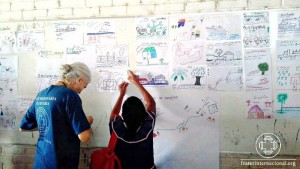 Volunteers of the school Casa de los Niños worked with the topic of fruits with the children. They learned the names and tasted the flavor of some fruits.

Two missionaries of Fraternidade conducted a great group service of haircut and hair-wash.

In the activity of artisanship, the topic with the immigrants was “the future”. What they intend to do. 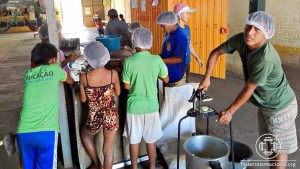 A donation of 11 garbage bins was received, which will be used in the CRI.

The shelves of the closet of the school were organized. An immigrant reported having his backpack stolen during the night, which contained documents and money. The immigrant will go next Monday to the Federal Police to request new documents.

A tube with a hole was found, which was causing a great loss of water, behind the vegetable garden of the CRI. Two Warao immigrants helped repair it. On the wall of the feminine toilet the leaking of water continues in two places.

The harmonization of shelves of the closet in the school of the CRI finished. A rich educational material to be worked with the children was found.