January 4 to 7, Thursday to Sunday 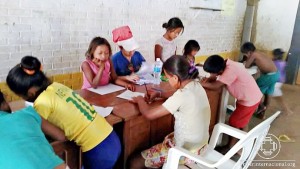 A family of immigrants (a couple with two children) who live in the Center of Reference for the Immigrant (CRI) asked for a food kit and informed they will return to Venezuela.

Many of those living in the shelter have been complaining of skin problems caused by the mosquitoes, which are also interfering in the sleep during the night.

Portuguese and Mathematics classes for adults were imparted.

Nail trimming and support in the preparation of dinner. 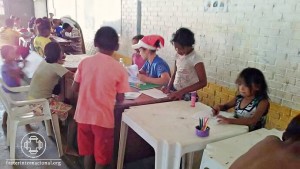 Administration of medicines in the shelter and health attendance in the blue container.

“During the class, we began conversations with the students about their lives. In this way, they could compare how their life in Venezuela with how it is now, and what they want for their future. What was highlighted the most is that they used to eat only once a day, and that now they can have three daily meals, besides the fruits that always appear as donation, and become a fourth meal”, said Alexandrina, a missionary of Fraternidade – International Humanitarian Federation.

Missionaries visited a new family of immigrants that arrived with a newborn baby. “We gave a kit for the baby, and a list of names for the couple to choose, as the baby still does not have a name”, said Alexandrina.

Packages of diapers were delivered in the white container to all the families in the shelter with children under two.

Donations from the Social Service of Commerce (Sesc).

Monastics of the Grace Mercy Order organized a work of awareness and perspective of life with the artisans of the shelter, with the participation of representatives of the International Migration Organization and of the United Nations High Commissioner for Refugees (UNHCR).

A Brazilian man was caught by the police during the night and was taken to the police station.

Roraima Water and Sewage Company (Caer) repaired plumbing of the sewage outlet of the toilet. Repairs in the toilets had been requested as there are two broken tubes.

Electric connection has been implemented in the containers, except for the one used for health and education.

A windstorm damaged the tent in front of the shelter.

A group of volunteers from the Baptist Church made the donation of soup.

After taking the vaccine against yellow fever, an immigrant did not feel well and was attended by the missionaries. 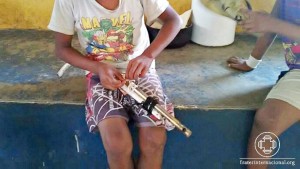 On Sunday, the group arranged to go to the Anaua Park Artisanship Fair. But the event did not occur that day, it will resume on February.

Missionaries have perceived that the children in the shelter were playing violent games, especially the boys, who created toys with pieces of broom handles, sticks and iron pieces, simulating weapons.

“We talked to them and managed to dismantle them. Later with played with paper folding and painting of globes with the kids, and we jumped rope with the girls”, explained Alexandrina.

The missionaries gave support to the preparation and distribution of dinner in the CRI. 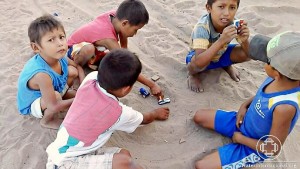 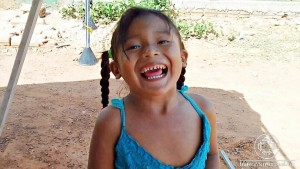