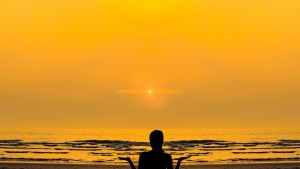 Many individuals today are having the opportunity of contacting light and wisdom. To come to be aware of this contact, they must develop in themselves the capacity to be in silence, especially in what concerns their ideas and concepts.

Those who thus awaken to inner realities perceive that, moved by spiritual impulses which they cannot refrain from attending, they are led to the work of planetary spirituality. Their consciousness does not find peace if it does not welcome it, if it does not obey the silence that reveals it.

Listen to the audio of Trigueirinho about the theme

A bridge is being formed between men and an energy nucleus of high potency, which, located in divine levels, radiates a love of a quality unknown on the surface of the Earth. Dark points are being removed from some individuals so that they can become aware of this contact. Repose has fundamental importance in eliciting this process, as during sleep the dissolution of retrograde nodes is undertaken, those which have been incrusted in the being for millennia.

Sparks of the light

For the maturity of the being to deepen, it goes through a stage in which it recognizes that there is in themselves a search for personal fulfillment through internal contacts – and he declines to feed it. When crystallinity and purity are firmly established in them, sparks of the light of sublime nuclei can be revealed to them, as the origin of all wisdom available to human beings.

It may be said that there is a nucleus that contains registers imprinted by consciousnesses of great initiates who thus gave birth to the revelation of the cosmic mysteries for Earthly life. These archives are composed of various categories, encompassing from the most occult secrets of cosmic existence to rules for initiates. In them is to be found the origin of texts intuited by H.P. Blavatsky (HPB), such as the Stanzas of Dzyan, which concern these secrets, and the book The Voice of Silence, which concerns the formation of those who approach spirituality or who evolve through service directly integrated with it.

Rules for disciples and aspirants

Also, the stanzas that DK transmitted to Alice Bailey had their origin in these archives, as well as the rules for disciples and aspirants, which form the basis of most of her works.

In contact with the cosmic nucleus responsible for the spiritual stimulation that is poured over the Earth, spirituality has determined a period in which this stimulation would take place more intensely. Such period should extend for approximately 100 years. HPB explicitly said that only in one century would humanity understand the reason for the Secret Doctrine to have been written despite all opposition.

This work was edited in August 1888, in spite of the incomprehension of the times and under express aggressiveness on the part of critics.

About the thirtieth year into the period stipulated by spirituality as “one century of special impulses”, DK transmitted to Alice Bailey the definition of its stages:

We are in the revelatory phase, a time of culmination of the internal stimuli transmitted throughout this period. The aspirants and disciples must overcome some tests, both individual and planetary, which include the test of silence.

There may arise, still during this planetary transition, more profound teachings from potent cosmic sources. This would constitute a supreme accomplishment on the part of the spirituality and of humanity. The latter would, thus, participate in the redemption of the planet Earth, thus cooperating with the Brotherhood of the Cosmos.

Extracted from the book by Trigueirinho: “Aos que Despertam” (“To those who Awaken”, in free translation), pages 124 to 126.
Irdin Audio – Complete at: O silêncio e o seu poder