Meetings of fraternization in Minas Gerais and São Paulo

During the last two weeks of the year 2015, Nuclei-of-Light and Service Associations affiliated to Fraternidade – International Humanitarian Federation, held meetings of community building activities with people involved with the work along the year. 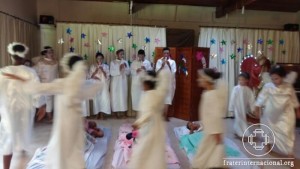 At the Nucleus-of-Light in São Paulo, located in the town of Carapicuíba, a meeting was held last December 17 with sixty children and volunteers of the Network-of-Light of São Paulo, Santo André and of the Sacred House Mother of São Paulo. Among the children were those of the community of Carapicuíba attended by the Nucleus and children of collaborators. All participated in presentations of the Choir and in a play about Christmas – the birth of the infant Jesus. At the end of the meeting, seven children were selected to record in video a message of Christmas. 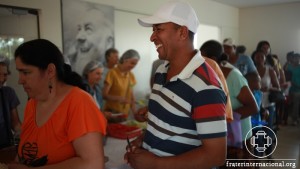 In the House of Light on the Hill, located in the town of Carmo da Cachoeira, Minas Gerais, Brazil, a community-building meeting took place on December 20 with the rural workers of the Community-of-Light of Figueira, family members, Missionaries of Peace and those responsible for each area of the Community. About 120 people altogether filled the rooms of the house, among them 17 children of the workers. After participating in a group lunch, adults and children watched a presentation of puppets made by the Missionaries of Peace. Then packages of toys were distributed with the name of each child. The workers also received presents and baskets assembled with products made in the Community-of-Light of Figueira. 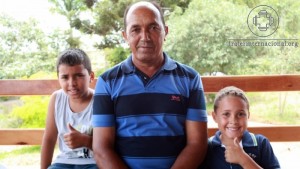 Cristovam Lima de Toledo has been working in the Community of Figueira for 15 years. He started as a tractor driver preparing land and today he supports the coordination of the crop work. He brought two grandchildren to spend the afternoon in the House Light on the Hill. His father was one of the first workers at the farm, where he stayed for 24 years. “The treatment we receive in Figueira is different, they know how to take care of us and respect our opinion”, says Cristovam.

Antônio Dimas Gomes was accompanied by his youngest daughter, Ana Júlia, who is three years old. Antônio has been an employee of the Community for 14 years. He began by hoeing the land in the crops of the farm and is currently a tractor driver. “Figueira is one of the best places where I have worked. There is more friendship here”, he explained. 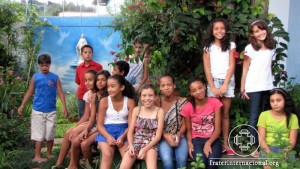 In the House of Art and Education, a unit of House Light on the Hill, the community-building took place on the 23rd , with the participation of students, parents, teachers and collaborators of the Community-of-Light of Figueira. Around 80 students of ages ranging from 7 to 14 participated. The House Art and Education attends children from the town of Carmo da Cachoeira by offering classes of handicraft, weaving, origami, music, English and extra math lessons. A work consisting in psychological and health care is performed with the families of the students. 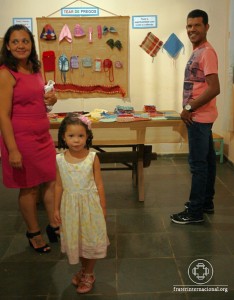 During the community-building meeting, the students presented songs of the Choir and took part in the prayers. The works of weaving and handicraft produced by the students throughout the year were exhibited in the classrooms. Juliana da Silva Marcolino came to see the works of handicraft and to speak to the teachers; her son, José Octávio, spends every morning in the school. “It is great to be able to meet the people who are close to him. Since he began attending this school, he has improved very much and become calmer. He had no patience before”, says Juliana. To Maria Helena de Paiva, coordinator of the House Art and Education, the gathering was an important moment to everyone involved with the school: “it was a way of getting together, united in prayer and in gratitude for all that has happened throughout the year and to ask for help and protection, in order for everyone to remain united”.