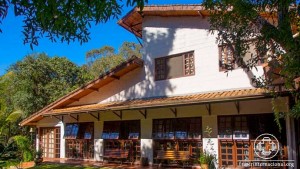 This narrowing, in the form of a cross, of links with the High and between the different spaces (Communities-of-Light, Nuclei-of-Light and groups Network-of-Light) that seek to manifest on the surface of the planet a new form of life based on Love, allows us to respond with greater fidelity to this Greater Will. 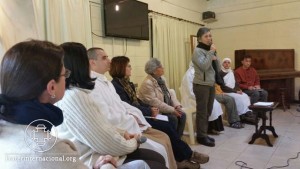 It was this affirmative response and the perseverance of people that made possible the construction and the development of the Communities-of-Light, Nuclei-of-Light and Marian Centers, highlighted Mirnuk, the representative of the Fraternidade – International Humanitarian Federation.

The strengthening that takes place when there is unity between a Nucleus-of-Light, the Network-of-Light and a Monastery (of the Grace Mercy Order) is very evident, it broadens our understanding of the task for which we offer ourselves and allows us to attract more brothers and sisters for selfless service”, explained Andreia Grossi, the regional coordinator of the Network-of-Light of Minas Gerais, state of Brazil. 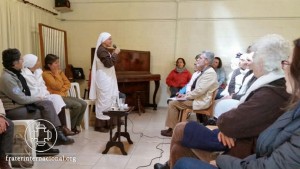 Mother Maria Cleonice, a member of the Grace Mercy Order and of the coordinating board of the Nucleus-of-Light in Sao Carlos, said that the disinterested service awakens the gift of love hidden within us and helps us to mature spiritually. “Service manifests itself at every moment, as long as we let our soul and our spirit express themselves because in this way every act of ours will be sincere and full of charity”, pointed the nun. 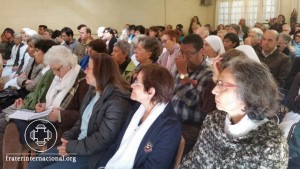 About 130 people participated, among collaborators, residents and members of the Network-of-Light from several cities of the State of Sao Paulo, such as Atibaia, Guaruja, Jundiai, Sao Jose dos Campos, Santo Andre, Sao Bernardo, Sao Paulo and Sorocaba. The theme was: “The archetype of a Nucleus-of-Light”. It began at 8:00 a.m. with a spiritual harmony and ecumenical communion. From 9:00 a.m. to 1:30 p.m., several monitors touched on different aspects that are part of daily life in the Communities-of-Light and Nuclei-of-Light.

“It was a very simple and true meeting that dealt with the fundamental aspects of group life, practical subjects, behavioral guidelines, compliance with the laws of the spirit, the Nucleus-of-Light as an extension of a Community-of-Light and as a reflection of a Planetary Center. Now it is up to each one to respond to the impulses received, according to their possibilities and degree of inner openness”, commented Nadjana, a member of the coordinating board of the host Nucleus-of-Light.