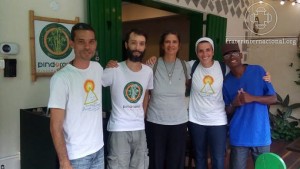 The Light-Community of the New Earth, located in the green valley of Gamboa among the mountains of the highlands of Capim, in Teresópolis, Rio de Janeiro, Brazil, being aware that to grow also means to join organizations with which values are shared, has established an association with two permaculture institutes found in the same state, in the neighboring city of Nueva Friburgo.

In this way, last March 14th, members of the Service Nucleus of Crer-Sendo, to which the community belongs, made first contact with the Pindorama Institute. Its representative, Mr. Nilson Dias, attended them in the organic restaurant, Casa Pindorama of the said institute, in the city downtown area. Later on, the group went to the rural area of the municipality where the institute is located; there they were able to appreciate the venture into the area of organic agriculture and bio-construction, with an emphasis on the use of bamboo for holdings and movable structures. 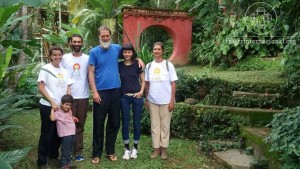 A second contact occurred on March 21, when the group visited the Tibá Institute, and were received by Marc Van Lengen and Aga Probala. This institute, also found in the rural area of the city of Friburgo, looks down on some installations of a harmonious architectural nature with buildings made with various techniques of bio-construction, surrounded by gardens and landscaping that follow the same approach of organic balance.

A common hope for the wellbeing of the planet was strengthened in the parties involved (Insituto Pindorama, Instituto Tibá) concerning the visit made by the group from the Light-Community of the New Earth. The contact generated a space where fraternal commitments were manifested. 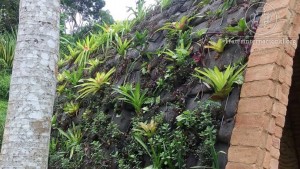 In this way, the Pindorama Institute offered the Community two scholarships for the Alternative Energies course, as well as a visit looking to an expansion of purposes.

On their part, the Tibá Institute will gift a study scholarship for the bio-architecture course, and committed to visit in the coming month of May, in which they intend to outline bio-construction projects.

The nucleus of Crer-Sendo / Community of the New Earth

(…) “Experiencing ‘Consciousness through Co-living’, a key subject for the sustainability and the maintenance of the Crer-Sendo Service Nucleus, draws to the Community of the New Earth the real possibility of living in attunement with a greater consciousness, in union and consecration to higher planes, thus being able to manifest new patterns of behavior.”

The Light-Community of the New Earth, under its premise of living in attunement with a greater consciousness, following its vocation of working for the preservation of the environment and the care of animals, which they have been developing for more than twenty years, decided to continue in their services proposal by opening up to an association with the two institutes of permaculture mentioned above. They glimpse new impulses for receiving new opportunities that would strengthen and augment the work that they have been doing.

The Service Nucleus of Crer-Sendo and the Light-Community of the New Earth are affiliates of the Fraternidade-International Humanitarian Federation, being in alignment with their philosophical-spiritual principles.