Humanitarian Roraima Mission – Assembly in the House of Passage

The missionaries of Fraternidade – International Humanitarian Federation (FFHI) arrived in the House of Passage (name of the shelter in Pacaraima) and had information of several situations of conflict that occurred in the night of March 14, Wednesday.

Therefore, before the distribution of foods, there was a great assembly, which lasted for about three hours. Many topics were touched upon: the constant fights, the exaggerated use of alcoholic drinks, the diseases, the internal rules of the shelter, and, especially, the need for the immigrants to know the Brazilian laws.

Incidents of several kinds happened. For example: On March 13 (Tuesday), some drunk persons from the shelter were invited to leave the House of Passage, complying with the internal rules of the shelter. These people have psychological supervision, but the majority resorts to drinks, especially when some news of family members arrive from Venezuela. Some manage to return to Venezuela to be with their families, but the greatest part cannot afford to travel.

Hygiene in the House of Passage 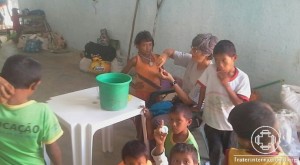 The outbreak of measles and of chickenpox also aggravates because the children are malnourished and dehydrated. The food shortage affects the nutrition of the children. In addition, the little ones eat with dirty hands, and, as the nails retains a lot of dirt, a missionary guided the nail-trimming of the children.

Visits to the shelter

There was a visit of a delegation of the Special Secretary of Indigenous Health (Sesai) to inform people about a training for communitarian leaders of health. The leaders would act inside the House of Passage with little family groups to facilitate the detection of health situations and thus take the necessary initiatives.