A Physical education teacher, follower of the Spiritist Doctrine learned about the needs of the place and will return.

The Portuguese and guitar classes continued, taught by monastics of the Grace Mercy Order.

The support in the kitchen of the shelter was reinforced, as the necessity of meals increased.

In the afternoon, a presentation was made of the Choir of the Nuclei-of-Light of Figueira in Roraima, Brazil, via internet, for groups of the Network-of-Light from North and Northeast of Brazil. 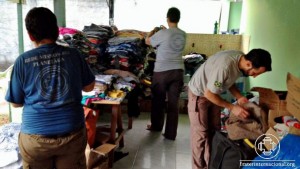 ⟢
Sunday 30 was a day of harmonization and cleaning of the House of Saint Joseph in the morning, and organization and sorting of donations of clothes and shoes in the afternoon. There was also a meeting, via internet, between the missionaries of Fraternidade – International Humanitarian Federation in Athens (Greece), Boa Vista (Brazil) and Carmo da Cachoeira (Brazil).

⟢
Monday 31 began with the organization of a large amount of clothing received as donation in the House of Saint Joseph.

Dog that arrived at the shelter and usually accompanies the classes received treatment anti fungi and care in the injured paw.

Members of the Flock of Jesus Christ Church attended the IRC – Immigrant Referral Center to know about the needs.

A Venezuelan Indigenous immigrant family was helped to organize and forward documentation to file a protocol with the Brasilian government.

Students and teachers of Pedagogy met to discuss the project of expanding the school in the IRC. The group was interviewed by Roraima TV. 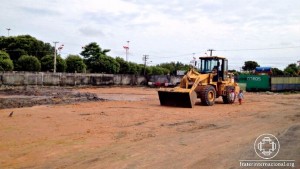 Works on the external area

On Tuesday 01 machines removed debris and set up land at the site of the earthworks outside the shelter. Work continued during the week.

“This makes a lot of difference, it makes it a lot easier because the request for shelter and the free temporary residence permit favors a way of organizing and knowing who is seeking refuge and feels like a refugee. With the new Immigration Law this gratuity would only be valid after November but with this injunction it becomes valid right away”, explained Clara, a missionary of the Fraternidade.

Donations of the week 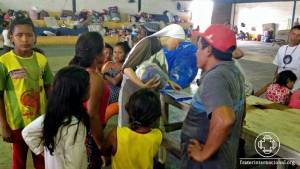 During the week was made two donations of clothes and one of food for the Association of Venezuelan in Brazil.

The Church of the Mormons and the Social Service of Commerce (SESC) provided food.

A rural producer donated cucumbers and pods and a manufacturer offer liquid soap.

“Friends of Smile” group made the donation of food and personal care products.

Staff of the Secretary of Labor and Social Welfare delivered in the House of Saint Joseph the donations of mattresses and mosquito nets offered by the United Nations High Commission for Refugees. Donations will be use in the shelter. 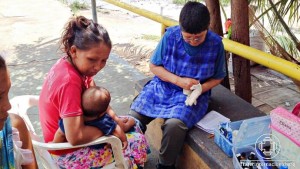 Attending to mother with baby

Physician of the Methodist Church performed health care and referrals.

Missionaries monitored four indigenous venezuelan immigrants in a laboratory in the city of Boa Vista to take HIV tests, and a child to the Children’s Hospital. On the same day, the Fire Departament took another child to the hospital. At another time during the week, a few more immigrants were sent to a laboratory for testing.

It was made the monitoring of another HIV-positive immigrant and a visit to an indigenous woman who is hospitalized with cancer.

“We have noticed that very acute health cases have arrived, especially in children, and that its require a fast and prompt action from the Fraternidade, and we always count on the readiness of the Fire Department”, said Clara, a missionary of Fraternidade. 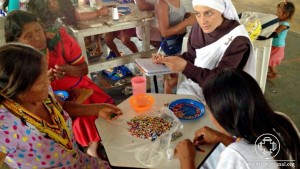 Handcrafts workshops were held daily in the shelter with the participation of 44 women enrolled. The workshops are supported by voluntary donations from society members of materials such as beads, needles, threads and fabrics. Craft work has prevented women from leaving to ask for alms with children.

“They found in craft a hope of a source of income”, said Clara.

During the week some conciliation meetings were held because of some disagreements occured.

“The number of people in the shelter has already exceeded 400, and even with the presence of police for 24 hours, there are some misunderstandings”, explained Clara. 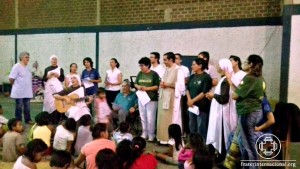 Presentation of the Choir

On Wednesday 2 the choir of the Nuclei-of-Light of Figueira in Roraima, Brazil, composed of missionaries, monks and collaborators, made a presentation for refugees from the shelter. “It was a time where we could live the spirit of Fraternity and joy”, said Clara.

On two occcasions during the week registrations were made with the registration form of newly arrived Venezuelan immigrants and with those who are in the shelter.

Arrival of the new immigrant group 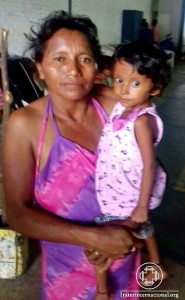 On Thursday 3 arrived in the IRC – Immigrant Referral Center, 20 indigenous immigrants of the Warao tribe, from Venezuelan. The group arrived in a very delicated health situation, especially the children, who were very hungry and malnourished. One of the children was referred to the hospital for malnutrition.

TV channel Globo News was in IRC and did a report.

⟢
On Friday 4 was made the general cleaning of the food deport that is in the kitchen of the IRC.

It was carried out a formigation service in the shelter to combat the proliferation of mosquitoes.

It was carried out tree pruning in the CSJ. 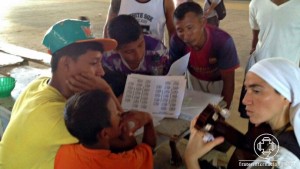 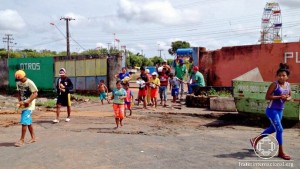