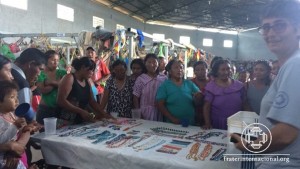 Meeting with the artisan women

On April 14, a meeting took place with the 50 artisan women of the shelter of House of Passing in Pacaraima, Roraima, to distribute the material for artisanship. It was highlighted the need for valuing artisanal work. One of the topics was the importance that the artisans buy their own material, with the revenue of the sale of the pieces they make. The group established that half the income from the artisanship would be used to buy raw material, and that the rest would be profits. As the raw material is being supplied for free, the artisans were selling the goods for a price that did not match even the cost of the material used.

With permission of the Army, a 15 year birthday was celebrated in the shelter on the 13th of April. The party had a group of musicians, cake and balloons, but no alcoholic drinks. 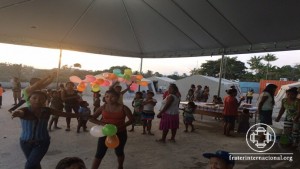 A priest from Venezuela

On the 8th, the shelter received the visit of father Inocencio, a vicar from the Catholic community of Tucupita, Venezuela, whence came most Warao Indigenous people who are staying in the House of Passing. He came to learn about the situation of the shelter and will return to make a follow up.

On the 9th, 30 Warao people arrived, coming from Venezuela. At first they were prevented from entering the shelter, as the limit of 500 people had already been reached. So, the Army made a new register and some vacancies were detected. Thus, the new immigrants were received, so that the limit was exceeded, and the total number reached 514 people. 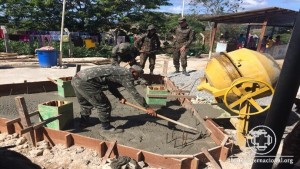 Structural construction in the water reservoir

Due to the issue of water shortage, on the 12th, the Army began a structural work of the water reservoir, so that it could receive 10,000 liters, which will be filled by tank trucks.

Meeting about the permanence of the Waraos

On the 11th, a meeting was held with the mayor of the town of Pacaraima, the director of the health center, a Mormon Church member, members of the Federal Public Defense and a representative of the State Government. The main topic was the permanence of the Waraos in the town.

The representative of the local Indigenous community showed his dissatisfaction with the presence of the Waraos in Pacaraima. He states that there are many sick people arriving, many begging for alms on the streets, without working, among other issues. Although he understands the urgent need of welcoming the refugees, he made several remarks, highlighting that the Brazilian Indigenous people were not being attended to, to the benefit of the Venezuelan immigrants.